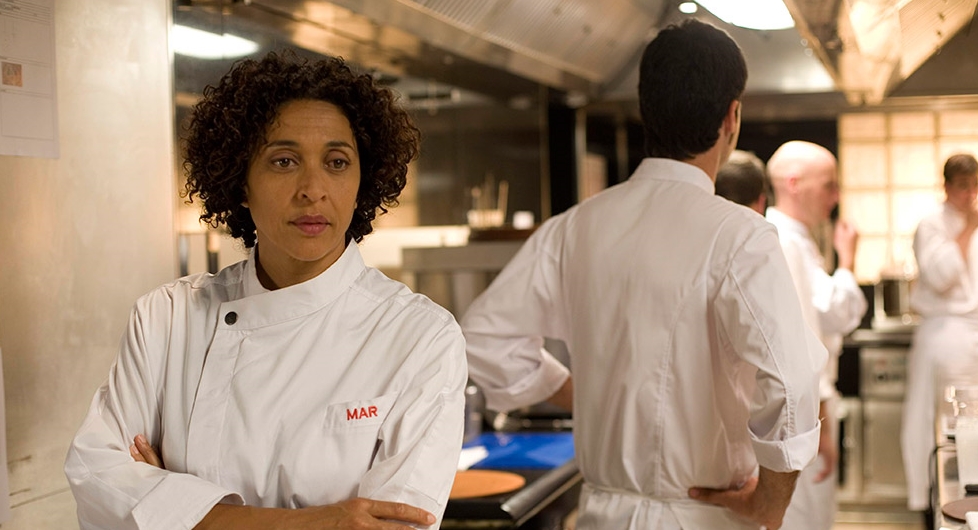 Tasting Menu begins without offering much detail about its story or thematic effort, and it ends without ever showing its cards. It’s the story (sort of) of the last night at the world’s best restaurant, which is closing for uncertain reasons, and with the owner/chef’s future unknown. Said chef, the world-renowned Mar Vidal (Vicenta N’Dongo), thinks it’s time for a change, though the decision to close the restaurant has rocked the culinary world.

But, there is only a sideways sense in which the film can legitimately be said to have anything to do with this restaurant, this night, or this chef. The official synopsis only talks about Marc (Jan Cornet) and Rachel (Claudia Bassols), who happen to have a reservation that they made a year ago. Despite having split up several months ago, they decide they can’t miss the historic last night. It might be awkward, but how can you pass on this opportunity? Of course, it’s made more awkward when Rachel’s most recent boyfriend, who she is clearly on the outs with, suddenly appears at the restaurant.

Difficult as it might be to explain, Tasting Menu isn’t about them either, though they may get more time on screen than any other single character, or pair of characters. It also isn’t really about the brilliant Togo Igawa’s character either, the Japanese investor who may have an offer for Chef Mar Vidal, nor is it about Fionnula Flanagan’s “Countess,” who has an unexplained connection to the restaurant and its owner, nor even Stephen Rea‘s completely unexplained restaurant patron, who may or may not be a food critic.

Delivered almost exclusively as a series of conversations, and with virtually nothing happening, the film walks us through an evening, but ties nothing together, and seems to have nothing to say despite the chatter. One plot arc, if you can call it that, revolves around the surprise dessert that the chef has created specifically for this night. The dessert is arriving by boat, for some reason, and – I’ll spoil things for you – it never arrives. This leads to things not going as planned, during the most planned night in most of these people’s lives, but it can hardly be said that this amounts to anything worthy note either. 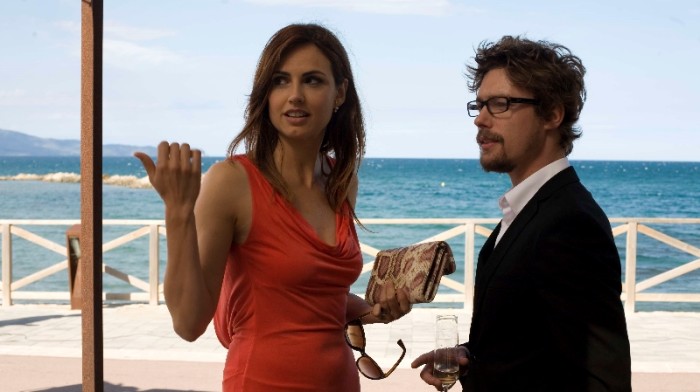 Another side story involves the chatty and somewhat irritating translator for the Japanese businessman mistakenly believing that Marc is hoping to make a play for her attention. This leads to Rachel becoming aware of, at the very least, the confusion, and ultimately leads to the revelation that Marc is oblivious that he did anything that might have suggested anything to anyone.

In the end, the film cannot be said to have a story except in the technical sense in which things happen, and it is possible to recount them. If anything, it is simply about the wild and wonderful way in which people touch other people’s lives, and the potentially profound effect of strange, and utterly ordinary, events. For some reason, the “touch” of people that never would have been met outside of a strange series events, and even people that strictly speaking were never met at all, spins this group of unconnected characters down avenues of thought they couldn’t have anticipated. Just like every other day.

For all that this is, in the right circle, perhaps one of the most important nights in recent memory, it turns out that it is as meaningless, in itself, as any other night.

When the night is over, you’d hardly register that anyone had a meal at all, because it is only mentioned on accident, and we only get a passing glance at the food. We’re keenly aware that a meal has happened, but you could rewrite the script in ten minutes to make it about the closing of an art gallery, and no one would know the difference, and nothing would really be different. Marc and Rachel look at each other differently though, the cosmic forces that be having put them in touch with just the right people, and creating just the right moments, so that each of them have run through a variety of perspectives until they reach the one that reveals, generically speaking, that it turns out that there really is another actual person standing there in front of them… reaching out.

The difficulty inherent in spinning the web that not only looks like nothing, but also delivers something that come to fruition believable, using conversations that can be digested as those that might actually happen, cannot possibly be stressed enough. It is probably enough to note that hardly anyone ever even makes the attempt.

On the other hand, it’s quite possible the movie isn’t about anything like this at all, but I like it just as much for that.