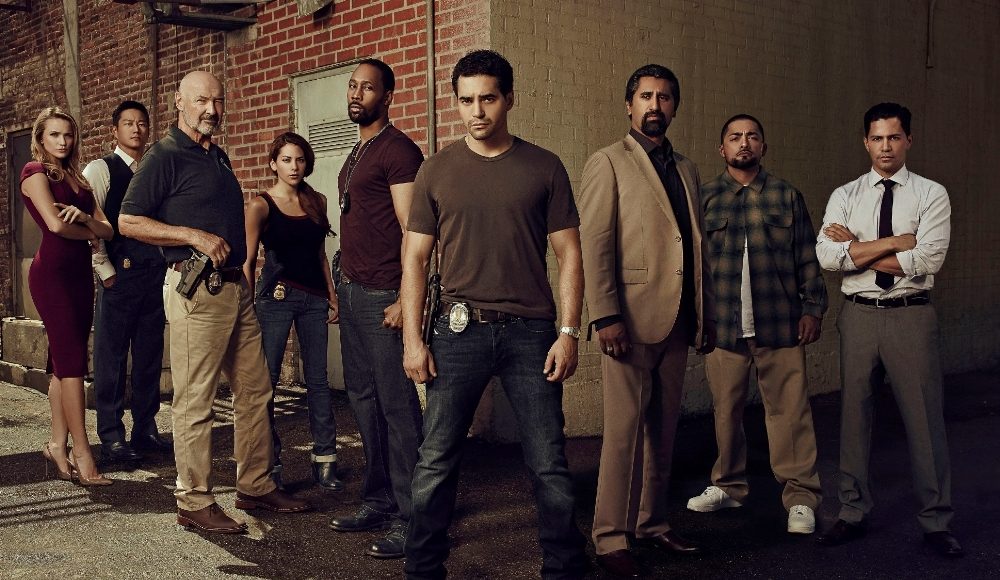 The relevant recommendation for FOX‘s new series, Gang Related, may begin and end with the knowledge that it is created/written by Chris Morgan. If the writing abilities that brought you the last five Fast & Furious films, Wanted, and 47 Ronin has left you impressed, you’re all set. Lock in to your new favorite show now.

If that fact alone doesn’t mean much to you, the show obligingly lays all its cards on the table in the first fifteen minutes of the pilot. You only have to invest that amount of time to know exactly what’s coming your way, I imagine for the entirety of the show’s run, but at least for the first few episodes. The show, and you have to give it some credit really, puts it out there and says, “Look, you’re in, or you’re out.”

In one of the quickest establishment segments in history (and that’s possible because it’s strung together with the most laughable of conveniences), we see Detective Ryan Lopez (Ramon Rodriguez) as a young boy growing up on gang-controlled streets in Los Angeles. Friends with one of the most notorious gang leader’s sons (or whatever), and disliked by his other son (who misses the most cliched, cardboard character award by way of the happy accident of not having a mustache to twirl), young Ryan becomes ingrained in “the family,” when said gang leader takes a shine to him. 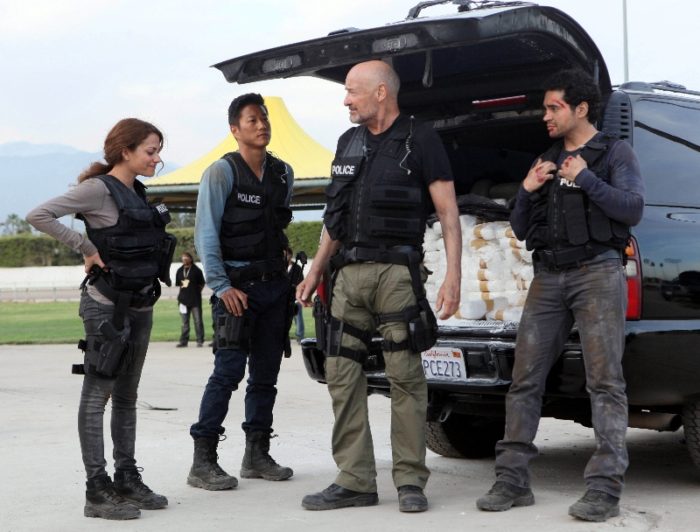 Fast forward several years, and Ryan is now working on a multi-agency drug task force, but he’s really still working for gang leader Javier Acosta (Cliff Curtis). He’s a decent guy at heart, but he’s the mole feeding information to Acosta, and the inner turmoil is just about more than he can bear. If that doesn’t sound like brilliant story construction, and sizzling drama… well, you may have graduated High School. The show kicks off with the straw that breaks the camels back, as Ryan’s partner, following the most contrived and overused devices, is gunned down by Ryan’s old rival. Now Ryan is boiling over, and begins to question everything about his life. It’s feints within feints crafted by those who believe you’re too stupid to ferret out the meaning of anything other than massive neon signs.

Imagine the horror film which opens with the girl not staying in the car, then tripping over a root, only to discover that her flashlight won’t work and the car won’t start, all while somehow simultaneously having sex in the boat house… and all in the first five minutes of the movie. That’s pretty much how Gang Related begins, just with a genre cliche substitution.

As you might expect, the show has its moments of action, including an attempted armored car robbery that turns into a chase scene during the pilot. It’s a good example of the show’s perspective and effort. Robbers apparently have the grand idea of taking down an armored car while it’s moving, because that makes sense, and when two cops show up in the middle of the chase, the criminals’ response is, “So, just keep going, because we can still get in this car we haven’t stopped yet, and get away clean.”

This is indicative of the show’s story construction. The conversation begins with wanting to shoot a scene in which we get to plant an explosive on a moving armored car and flip it over. The response, “what conceivable situation would lead us to that happening?” is met with, “Pfff… who cares, whatever dumbass thing you have to come up with.” Bam! TV show.

The real irritant of it all is that there comes a moment when we might have had an interesting take on the cops vs. gangs theme. Sam Chapel (Terry O’Quinn – who can’t catch a break) leads the task force, and he’s had enough as well. He decides to adopt a new theory of taking down gangs, going after their families. It’s too hard to go after the bosses, but what about if we try making life hell for their wives and children, possibly even to the extent that we trump up some charges and put them behind bars? That might actually be a good show all on its own. Walking through the impending drama of moral ambiguity, and the potential responses to such a venture. Unfortunately, in the current realm of increasingly screwball plot steps, what this means is that a cop suddenly pulls out a bag of drugs in order to plant them in a suspect’s apartment, waves it around, and says (something like), “Yo. Let’s do this!” and not one cop in the room blinks.

The pilot also serves up a scene that allows Acosta the chance to torture someone, because that’s one of the bullet points on the first page of the chapter on plots in Gangs Are In Your TV Show… For Dummies.

The oddest part of the show is that the pilot is self-contained. The show could end there, never to be seen again, and you’d be good. In fact, it’s a fair question to wonder what the sell is to tune again.

With a show like this, that spills quickly into the sort of self-mockery that makes it hard to imagine anything other than the idea that the creators are laughing at you, it’s either going to rocket to popularity, or crash instantly. The second episode’s ratings are all you need to know. Which way it will go is anyone’s guess though. Sometimes you’re the frat party people show up to, and sometimes you’re not, but it doesn’t mean that the one magically inherits some virtues that the other doesn’t possess.

On the other hand, I can’t say that if I were in charge of making money for FOX I would pass on this one, because, you know… Scandal.

I give the show a slight boost in rating based solely on the fact that most of the actors somehow manage to deliver pretty well, and are certainly giving it their best shot. RZA (though we don’t get much of him at first) and Sung Kang stand out as helping things tremendously with what start out as rather small supporting roles.

If you do find yourself a fan of this one, you have to be sure to pick up the Blu-Ray once it’s released. It’s permanent entertainment, as you can watch it repeatedly, and with the episodes randomized if you like… what the hell difference could it make?

Every villain has a noble cause, and every hero has a dark side.

When Ryan’s best friend and police partner is senselessly killed by a notorious gang member, Ryan teams up with longtime Task Force member CASSIUS GREEN (RZA, “G.I. Joe: Retaliation,” “Californication”), who has been at the forefront of the city’s war on organized crime. In this war between law enforcement and gangs, the series explores how only people who really know the streets can win the battle on the streets.

Despite his profession, Ryan is still beholden to the gang’s leader, JAVIER ACOSTA (Cliff Curtis, “Live Free or Die Hard,” “Training Day”), the father figure Ryan has tried to make proud his entire life and the man who masterminded his entry into the police force. It’s a secret that has been held for a decade by Ryan, Javier and Javier’s sons: cold-blooded gang lieutenant CARLOS (Rey Gallegos, “Sons of Anarchy,” “24”); and Ryan’s childhood best friend, straight-laced investment banker DANIEL (Jay Hernandez, “Last Resort,” “Hostel”).

But Ryan is starting to realize that he is even more dedicated to being a cop than he is to Los Angelicos. He is respected by his team, including TAE KIM (Sung Kang, “Fast Five,” “Live Free or Die Hard”), VERONICA “VEE” DOTSEN (Inbar Lavi, “Underemployed,” “Street Kings 2: Motor City”) and Task Force leader SAM CHAPEL (Terry O’Quinn, “Lost”), Ryan’s other surrogate father figure, whose estranged daughter, JESSICA (Shantel VanSanten, “One Tree Hill,” “The Final Destination”), is the city’s Assistant District Attorney.

Ryan’s education comes from the streets, and that schooling will work to his advantage, as he, Cassius and the rest of the police unit take aim at the city’s most dangerous gangs. While balancing two allegiances, two father figures and two families, Ryan’s increasing sense of loyalty to one will help him finally determine which side of the law he is really on.

It's official, Stranger Things 4 is on the way, though things are strange indeed as the series moves forward. As much...
Read more

The elevator pitch for Utopia Falls, a new series coming to Hulu (and CBC Gem in Canada), is hard to imagine, especially...
Read more

Fans of Fleabag have something new coming that they are going to want to get on their radar, though it looks like...
Read more

The elevator pitch for Utopia Falls, a new series coming to Hulu (and CBC Gem in Canada), is hard to imagine, especially...
Read more
Television