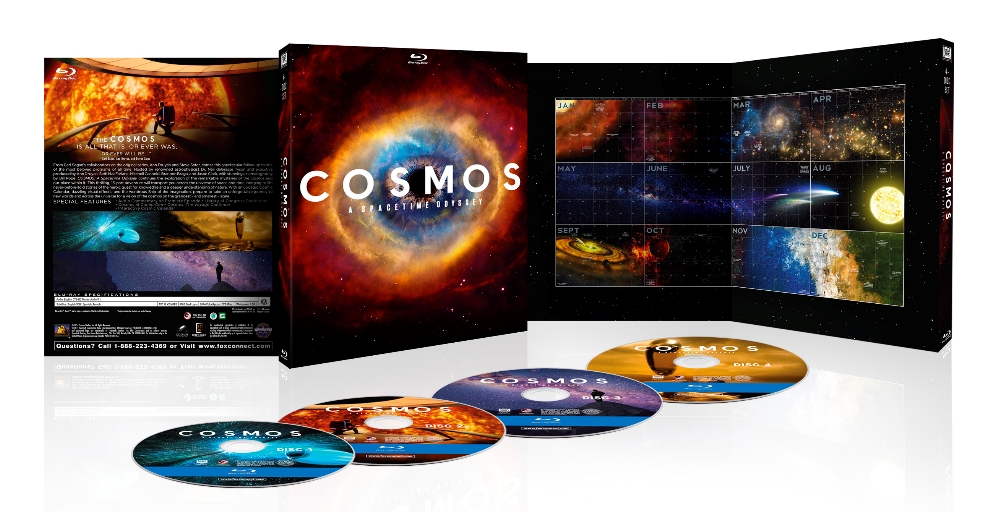 If you’ve been watching Cosmos: A Spacetime Odyssey with Neil deGrasse Tyson, you know this is an adventure worth owning, and you can probably imagine that there are going to be some bonuses worth owning with a Blu-Ray release. Hitting tomorrow, the set is loaded with cool extras, and I’ve got a copy for you to win.

Right on the heels of the hope-inducing popularity of the show, the show is wasting no time giving you the opportunity to watch it all again. Among other bonuses, and exclusive to the Blu-Ray, you’ll get a chance to wonder at the Cosmic Calendar, an interactive history of the universe.

Make sure you get your hands on this one.

Below, get all the info on the release, including the full bonus list, and get some info on some other “famous geeks” who may surprise you as much as Seth MacFarlane. And, don’t forget to enter for your chance to win your copy. 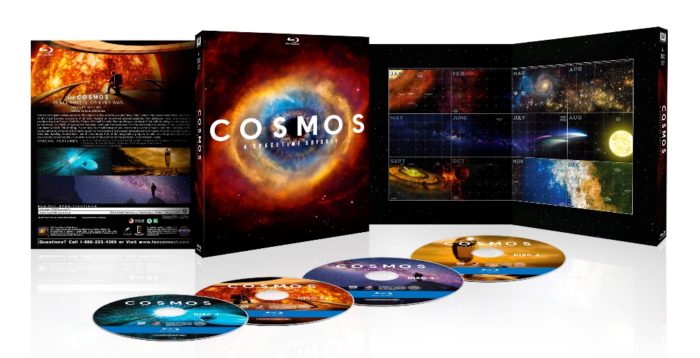 Fans can also discover what connects us all and see the past, present and future of our galaxy with the interactive “Cosmic Calendar,” exclusive to the Blu-ray release. COSMOS: A SPACETIME ODYSSEY is the spectacular follow-up to Carl Sagan’s award-winning series that explored the remarkable mysteries of the cosmos and our place within it. This thrilling, 13-part adventure transports viewers across the universe of space and time, bringing to life never-before-told stories of the heroic quest for knowledge and a deeper understanding of nature. With an updated Cosmic Calendar, dazzling visual effects, and the wondrous Ship of the Imagination, fans will experience an unforgettable journey to new worlds and across the universe for a vision of the cosmos on the grandest and smallest scale.

When it was announced that “Family Guy” creator Seth MacFarlane would be Executive Producer of an update the the classic Carl Sagan-hosted science documentary series “Cosmos,” it raised a few eyebrows. Even more people were surprised to learn that the funny man was a personal friend of new “Cosmos” host and renowned astrophysicist Neil deGrasse Tyson.

In honor of Cosmos: A Spacetime Odyssey’s release on Blu-ray and DVD June 10th, we thought we’d take a look at some of Hollywood’s other unexpected geeks.

The beefy action star doesn’t necessarily fit the stereotype of a Dungeon Master, but Diesel has proudly been a Dungeons and Dragons enthusiast for over 20 years!

The Oscar-winning beauty holds a degree in Psychology from Harvard University, and has twice had her research published in scientific journals.

Stella may have needed Taye Diggs to help her get her groove back, but Bassett never lost her academic groove. The acting powerhouse has her Bachelors in African American Studies from Yale and a M.F.A. from the Yale School of Drama.

The “All of Me” singer turned down Harvard in favor of a degree in English and African American Literature from UPenn. He even worked at the prestigious Boston Consulting Group before making a splash on the music scene.

Before he was Master of the Universe, Dolph Lundgren was a master of science, having earned a Bachelor’s degree from the Royal Institute of Technology in Sweden, and a Master’s degree in Chemical engineering as well as a Fullbright Scholarship to MIT.

The “Parks and Recreation” actress didn’t rely on the privileges that came with her family name (she’s the daughter of music and producing mogul Quincy Jones). She worked hard and earned a degree from Harvard University. If that isn’t enough geek cred, she’s even created her own comic book series called Frenemy of the State.

Being a brother to Ben Affleck, Casey had his fair share of experience with giant stars—something that probably helped him during his programs in astronomy and physics at Columbia University.

We all knew Ashley Banks had a good head on her shoulders. Who knew the performer who played her was so brainy too? When “The Fresh Prince of Bel Air” ended its run on television, the actress and singer took a break from acting to get a degree in Politics and African American Studies from Harvard University.

Hermione Grainger is practically the patron saint of geeky girls everywhere, played to perfection for 10 years by the extremely talented Watson. It made us all proud to see Watson avoid the celebutante lifestyle her fame could have afforded her and choose to pursue a college degree—from Brown University, no less!

As if being the voice of Meg Griffin on cult animated series “Family Guy” wasn’t enough to get fanboys drooling, she’s also a known World of Warcraft addict, often playing anonymously with strangers online. Maybe you’ll be a little nicer to that Goblin you come across the next time you play.

Applegate may have gotten her start playing ditzy Kelly Bundy on “Married with Children,” but in real life the actress enjoys much nerdier pursuits. She is a hardcore gamer, spending much of her downtime on her Playstation, Xbox, and Wii.

Let your inner geek-flag fly with COSMOS: A SPACETIME ODYSSEY on Blu-ray and DVD June 10th.