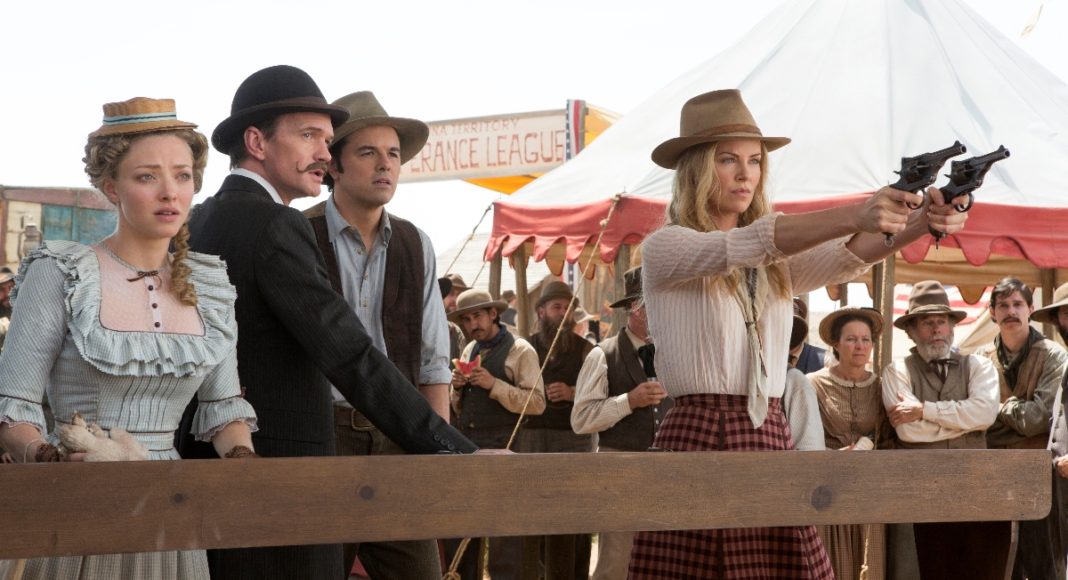 A Million Ways To Die In The West Movie Review

Seth MacFarlane makes for an interesting note in the world of breaking into cultural awareness, because he somehow seems to be in more places than he really is. Though Family Guy and American Dad are certainly popular, and Ted did well enough at the box office, you’d think he had a lot more credits when you look at his status in the collective consciousness.

That fact may have something to do with a lot of the missteps found in A Million Ways to Die in the West, though it may be tricky to see the connection, and it hardly matters if anyone does. It’s a movie that promotes itself as being, “by the guy who brought you Ted,” and that speaks volumes. First, if you say Ted, you know who brought it to you, so aren’t we clever for not mentioning his name? More importantly, what film was ever leveraged as, “by the guy who…?”

MacFarlane, especially considering the works that have made him famous, is in that rare position of having a certain percentage of fans who are lukewarm about anything he’s done, but manage to love him anyway. His brand of comedy generally consists of pushing boundaries as far as possible, and including every thought he has in the 22-minute scripts of his shows. You’re bound to like something, but a lot of it won’t be funny at all, and somehow, a lot of people come out the other side with a general positive regard for him.

It’s a theory that works when you have less than thirty minutes, and need to keep people from changing the channel. By the time you’ve registered the gags that aren’t that great, there have already been three more to ponder, and one of them probably made you laugh at least a bit, so you’re still around.

The problem here is that, despite all the plethora of bodily fluid gags that are both aimed at pre-teens, and outside the scope of what is appropriate for them to watch, there’s an actual story to A Million Ways to Die in the West, and one that might have made for a movie that was a lot of fun.

Albert (Seth MacFarlane) has a sheep ranch in the wild west, and as the narration tells us, he is living in the wrong place and time. After not exactly putting in the bravest performance at a gunfight, his long-time girlfriend, Louise (Amanda Seyfried), leaves him, and soon turns up in the arms of local businessman, Foy (Neil Patrick Harris). This leaves Albert not only heartbroken, but truly torn about his existence, because he hates the west, a place where absolutely everything can kill, and probably will.

Meanwhile, we are introduced to Clinch (Liam Neeson), the areas most notorious outlaw, and his wife, Anna (Charlize Theron). Anna hates Clinch, and is basically a prisoner. Clinch sends one of his henchman with Anna to hole up in Albert’s sleep town while nefarious deeds are performed elsewhere. Anna and Albert are thrown together, and become friendly while conspiring to give Foy his comeuppance, which Clinch will ultimately not find to be a good thing. Hilarity ensues.

The combination of a story that is mostly delivered by hints, and a penchant for randomly throwing out the grossest humor possible, makes for something that is ultimately just a mess, and a wasted opportunity. In the pitch, the love story is a fun an interesting twist, as are most of the side plots. The inclusion of Albert’s best friend, Edward (Giovanni Ribisi), and his befuddling predicament with his girlfriend, Ruth (Sarah Silverman), who is the town whore, but won’t sleep with him, is gold. The problem there is that the funniest thing about it is the bare idea, and very little of what actually happens in the film is worth as much as the ideas it causes you to have. Such is the overall burden that the film can never overcome. Instead of mining this bizarre relationship for some actual comedy, MacFarlane is much more interested in figuring out how it opens the door for something gross, or for using as much vulgarity as possible.

There is something to be said for MacFarlane’s effort to push the envelope, and then push right through, but he hasn’t learned where comedy ends and stupidity begins. That’s a shame, because if we remove all the notes that hope you’re willing to embrace your inner moron, we’d have a decent film, even without the effort of replacing them with anything.