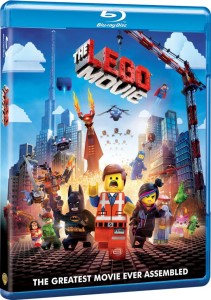 The Lego Movie is now in stores, and I have a great opportunity for you to win your very own copy of the Blu-Ray!

If you didn’t catch this one in theaters, and even if you did, you’re going to want this one at home. A surprisingly solid effort, this one has something for everyone, and is far more hilarious than it has any right to be. Plus, it has a lot of heart, and spins a great story.

It seems like every family movie released wants to call itself an instant classic, but even I think it applies to this one. It isn’t just that it’s a lot of fun, and will entertain the kids, but it also has an awesomely anti-corporate society backdrop that is rather surprising, and a nice treat for any film to dare aim at younger audiences.

To help celebrate, and have a bit of fun, check out the Lego Movie App below, and create your own gif from the clips while listening to Everything is Awesome!

Play around with that for a while, show off the moments you like best from the film, and then enter to win a Blu-Ray for yourself!

The LEGO® Movie, the first-ever, full-length theatrical LEGO® adventure, directed by Phil Lord & Christopher Miller is an original 3D computer animated story that follows Emmet, an ordinary, rules-following, perfectly average LEGO minifigure who is mistakenly identified as the most extraordinary person and the key to saving the world. He is drafted into a fellowship of strangers on an epic quest to stop an evil tyrant, a journey for which Emmet is hopelessly and hilariously underprepared.

Chris Pratt (Moneyball) stars as the voice of Emmet. Will Ferrell (The Campaign) stars as the voice of his primary adversary, President Business, an erudite, anal-retentive CEO who has a hard time balancing world domination with micro-managing his own life; while Liam Neeson (Taken) voices the president’s powerful henchman, known as Bad Cop, who will stop at nothing to catch Emmet.

Starring as Emmet’s fellow travelers are Oscar® winner Morgan Freeman (Million Dollar Baby), as Vitruvius, an old mystic; Elizabeth Banks (The Hunger Games, Emmy nominee for 30 Rock), as tough-as-nails Lucy, who mistakes Emmet for the savior of the world and guides him on his quest; Will Arnett (Emmy nominee, 30 Rock), as the mysterious Batman, a LEGO minifigure with whom Lucy shares a history; Nick Offerman (NBC’s Parks and Recreation) as a craggy, swaggering pirate, obsessed with revenge on President Business; and Alison Brie (Community) as a sweet, loveable member of the team, with a powerful secret.

*Each household is only eligible to win The Lego Movie Blu-Ray via blog reviews and giveaways. Only one entrant per mailing address per giveaway. If you have won the same prize on another blog, you will not be eligible to win it again. Winner is subject to eligibility verification.