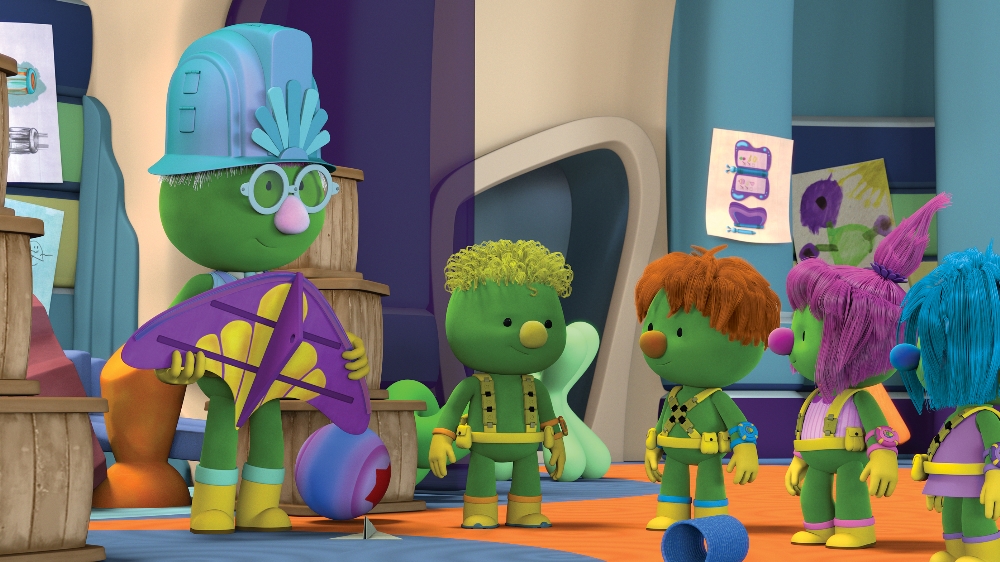 Going back to the nearly untouchable world of Jim Henson’s Fraggle Rock is no small affair, and Hulu‘s first original show aimed at kids, Doozers, does just that. If you’re going to take a shot at something beloved by so many, you better hit it out of the park, and this show does. Of course, that’s partially because there was no way that this was going to see the light of day unless there were a lot of people behind it, but it still could have gone wrong.

As if digging into a classic show wasn’t enough, Fraggle Rock actually stands the test of time, and has a whole new generation falling in love with it.

Doozers, which recently released even more episodes on Hulu, is a far different creature than you might expect, with the titular builders in a much more elaborate and interesting society than is suggested by the fact that we thought all they did was build radish-based towers for Fraggles to eat.

Our focus is the Pod Squad – Spike, Molly Bolt, Flex, and Daisy Wheel – four young Doozers who have to use their wits to overcome a wide variety of obstacles. As you might expect, the show focuses on creativity and fun, but the show is also built around a design thinking curriculum, which is part of an overall STEAM initiative (which is not far afield of the frequently mentioned STEM programs).

Brendan Boyle of IDEO, a design and innovation firm, consulted on this curriculum and said, “design thinking is a simple way to describe how people creatively solve problems. With ‘Doozers,’ we worked closely with the Jim Henson Company to match this concept of design thinking with the way kids play and create. You need to play to innovate, but that doesn’t come without a little bit of failure through trial and error.”

The show, which exists as episodes that are just under fifteen minutes in length (a common trend for children’s programming these days), is obviously going to be filled with fun, and characters that are inviting and engaging, but the focus on learning is readily apparent. Though there are obvious teaching points built into things, for the most part the show simply mimics play, and sticks it into a world with a lot more possibilities, and walks through a creative process. What is perhaps the most telling feature of the plot construction is that options go wrong, which is somewhat unique. Collaboration is showcased, as the members of the team have differing perspectives on how to solve problems, which leads to a variety of ideas being explored, and they don’t always work out.

More importantly, there’s a certain self-reliance involved, that shows the Doozers as predisposed toward looking to themselves first, and when in need of support, asking for help, instead of asking for solutions.

This all makes things sound a little boring, and that’s without even mentioning the eco-friendly elements that pop up along the way, but the overall fun is probably a given. The show hints at this during the opening sequence as a Rube Goldberg machine takes our Doozers and a lot of vegetables from point A to point B. This leads us to the sort of awesome creative power that is going to be at the forefront of everything that happens, whether we are building giant puppets, or tracking down the culprit of a mystery, we’re going to be building, creating, and exploring some wild ideas. The theories and educationally-based efforts don’t mean much if kids don’t want to watch the show, and this one does an amazing job of pulling them in. My own kids love it, and that covers a four-year span.

It’s not only a show your kids will love, but it’s a show you hope your kids will love, and there’s hardly more you could ask for. For myself, I’m hoping for a branding push to hit stores hard, with who knows what manner of “creation kits” that tie-in with the show’s subjects. I have never wished for a marketing tie-in before, which should tell you something about how solid the show really is. 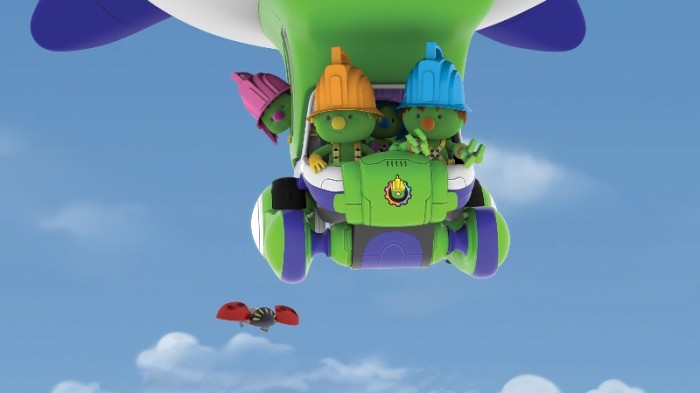 As mentioned, four new episodes hit Hulu on June 27th, and they are something of a collection which focuses on the Doozer World Expo.

“The Pod Squad Pavilion” – Everyone is busy getting ready for The Doozer World Expo. Professor Gimbal assigns the Pod Squad a very important job: to create a pavilion that represents The Pod Squad.

“Doozers on Parade” – The Doozer World Expo is underway and it’s time for all the villages to present the shows they’ve prepared to tell everyone what makes their village unique. The problem is, each show is so long and elaborate, the ceremony would take days! Molly puts on her thinking cap and, along with the Pod Squad and her new friends, Buzz, Tag and Zippa, comes up with a great solution that will allow everyone to participate!

“Three’s A Team” – It’s Contest Day at The Doozer World Expo: the day when all Doozers team up to test their invention skills. Spike accidentally promises to enter with both Daisy Wheel and Buzz and now he needs to figure out a way to stay in the contest without hurting anyone’s feelings.

“Sky High Doozers” – During The Doozer World Expo, the Pod Squad and their visiting friends, Buzz, Tag and Zippa, all work together to create a Sky High Doozer tower that represents Doozers from all around the world.