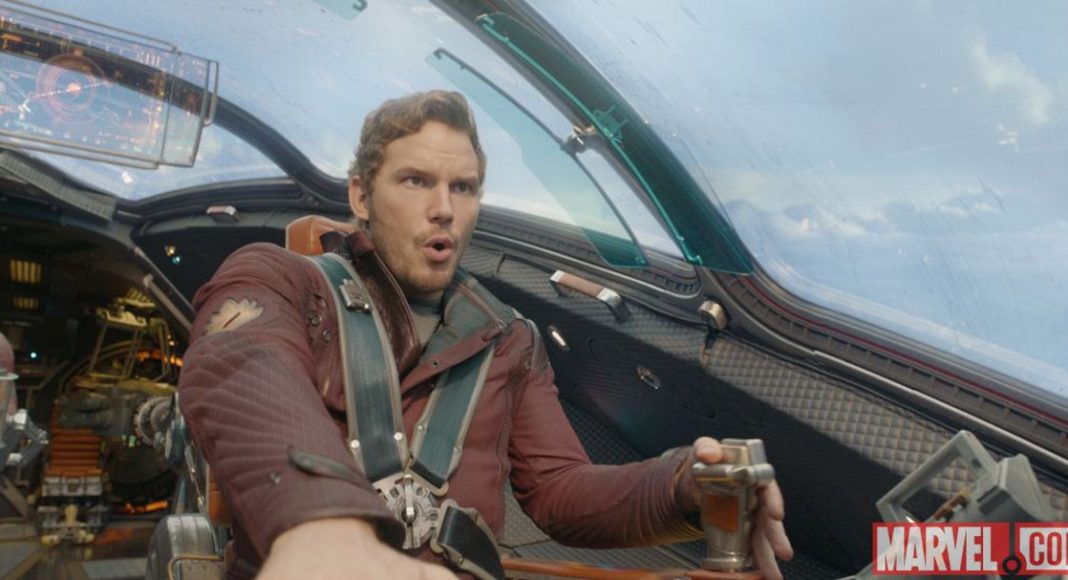 Guardians Of The Galaxy Blu-Ray Review 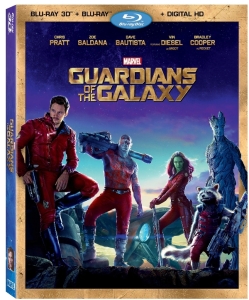 Guardians of the Galaxy hit theaters with surprising force, based on the fact that it is a comic-book film based on characters virtually no one knows, and the Blu-Ray is here to repeat the frenzy. Part space opera, part comic adventure, the film is an unusual hybrid of elements, made all the more interesting by way of characters who aren’t going to be explained, and are themselves rather fantastic.

Catch our podcast review of Guardians of the Galaxy here.

The film introduces us, in rather spectacular fashion, to Peter Quill (Chris Pratt), who fancies himself Star Lord, galactic superthief, or something. Having been abducted from Earth as a child, though again, this is a film with little interest in backstory, Peter was raised by the criminals who captured him, and he now finds himself outfitted with some really snazzy tech.

This time, rummaging through a forgotten world, he’s gone after the wrong thing, and gets caught. This leads to meeting up with Groot, Rocket Raccoon, Gamora, and Drax, a motley crew for sure, and one that has fallen on the wrong side of some spectacularly evil forces. We aren’t just being hunted by the worst evil in the galaxy, but the worst evil you could imagine… sort of.

It will all eventually involve a prison escape, a very strange space ship defense web, and the kind of former “sisters” battle usually reserved for Japanese films that cut a lot of dialogue into the middle of sword fights.

The plot, to be honest, is the sort of thing that is best left under-analyzed. Though it is, after a fashion, fairly grandiose, and naturally involves the impending destruction of just absolutely everything, it is ultimately something like an A-Team episode on steroids, with all the misfit team shenanigans, and barely fleshed out “villain” that reference implies. 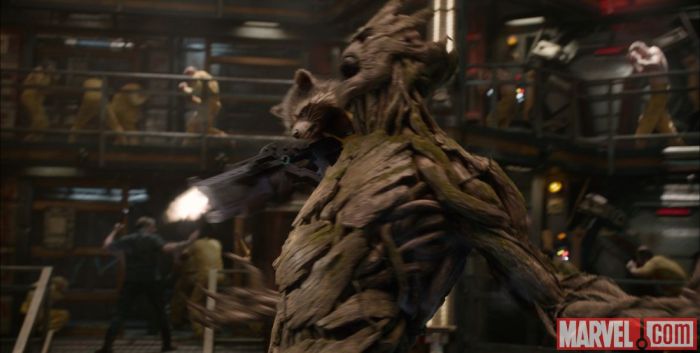 No, the story here is just the fun, adventure, and what we can make of the characters. You’d think that was a handicap to begin with and it is, but when you add in the fact that one of the characters speaks very little, one of them ups the ante on that by saying virtually nothing beyond, “I am Groot,” and one of them is a raccoon. This is where the lack of attention to detail about our characters’ pasts stands out as making such bizarre sense. If you can find yourself interested, without the benefit of any reason to be interested, something surprisingly engrossing must be going on.

It works so well that the film’s main problem is that it has to tie together some semblance of story, if only to provide our excuse for watching these characters do different things, and when it takes its foot off the gas, most of the time it feels like being snapped right out of the experience. There are exceptions, as when Rocket gets very serious during a group discussion, but whenever the film starts explaining things, or focuses on the “bad guys,” there’s a structural breakdown that is jarring. This luckily doesn’t detract that much from the overall effort, but a little more effort toward an engaging story that could actually live up to the characters would have gone a long way.

Guardians of the Galaxy Bonus Features

The Blu-Ray is probably not quite as loaded as you would expect from a release of this magnitude, but the features it includes are solid.

You have a fair number of the usual suspects – a gag reel, some deleted scenes – and fans are going to enjoy them, but the value here comes in two Making Of featurettes and the commentary track. Rounding things out, there’s an exclusive look at Marvel’s The Avengers: Age of Ultron.

The commentary track, provided by director James Gunn, is going to go down for most people as one of their favorite commentary tracks. It’s filled with as much fun as the film itself, and that’s far more rare than it ought to be. This is the commentary track of a guy who loved making a film, sharing all the ins and outs of a production that spawned a thousand stories, and was as much fun to make as he hopes it is for everyone to watch.

The first featurette, Guide to the Galaxy with James Gunn, runs just over 20 minutes and is, more or less, what every behind-the-scenes/making of featurette should be. It shows how things come together, lets you step onto the sets, and shows off the characters, but never bogs down into the minutiae that you didn’t really sign on to learn about. Most impressive, and oddly fascinating, are the sets that were constructed for a film that you know involves a lot of CGI.

The other featurette, The Intergalactic Visual Effects, is really the Groot and Rocket show, and gives you around seven minutes of exploration into the use of two completely CGI characters in a film. It’s a bit odd to watch, especially when you try to imagine what the other actors had to do much of the time. It also allows Sean Gunn, Peter’s brother, probably known to most as Kirk from Gilmore Girls, to get some mention for his effort as the Rocket Raccoon stand-in. Though this one is fairly short, you get a lot packed into the time.

Below, check out some clips from the bonus features.

Overall, this one is a solid release, though I have to think that most fans of the film will wish they had a bit more in the bonus feature category. The video is amazing, and if you have the right system, it will blow you away. The film, as you’ll learn during the Making Of featurette, pays a lot of attention to the visual style, and the contrast involved, and you get every bit of that here. It’s a definite show off piece.

Guardians of the Galaxy Behind the Scenes Stills