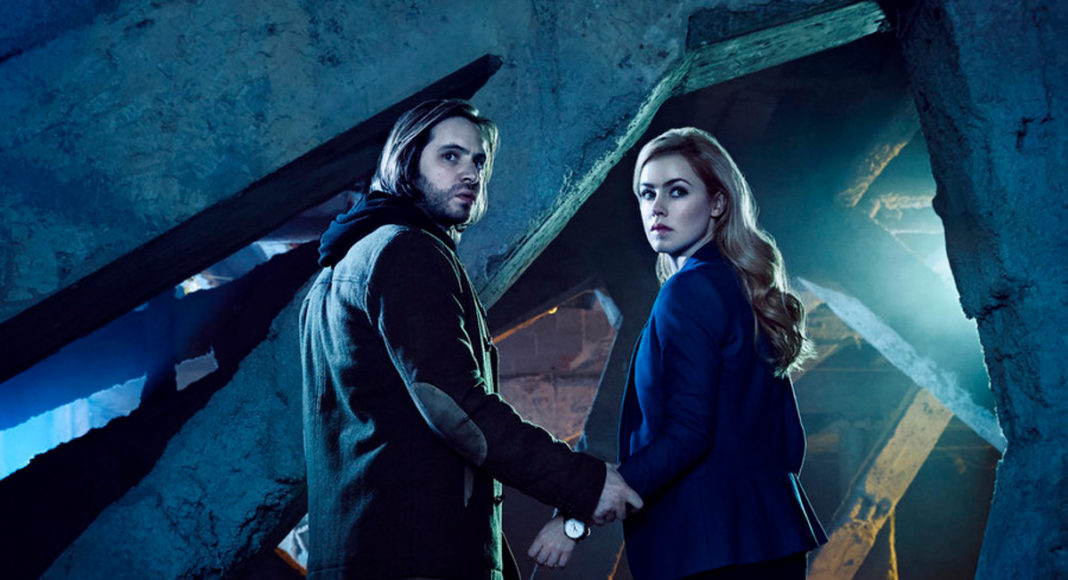 Syfy is no stranger to taking risks, or making shows and movies with odd concepts, but basing a series on a cult-popular, 20-year-old, sci-fi film, which is itself loosely based on another film from the early ’60s, is… bold. 12 Monkeys is that bold effort, and apart from all the other problems inherent in such an beastt, there are a lot of fans you’re likely to irritate, and Syfy is already after a fair portion of the “rabid fan” demographic, just as a general rule.

In this spin on the tale, James Cole (Aaron Standford) travels back in time from a future that has been decimated by a plague. A clue from that future leads him to Dr. Cassandra Railly (Amanda Schull), who he needs to lead him to Leland Goines (Zeljko Ivanek). The theory being that, given the only information we have, killing Goines will prevent the plague from happening. When that doesn’t work, Cole finds himself returning to the past repeatedly, trying to piece together clues, while Dr. Railly is forced to live with the repercussions of his visits.

They quickly lock onto references to The Army of the 12 Monkeys, and find that Goines’ daughter, Jennifer (Emily Hampshire), has some connection to events, and is in a mental asylum.

The show moves along with Cole having to maneuver in the past, without a great deal of ability to do so, and bring back information to the future, which will hopefully lead to another meaningful point to return to again. Things heat up when we meet The Pallid Man (Tom Noonan), who is apparently either the head of The Army of the 12 Monkeys, or its head enforcer. In a pretty quick move, by TV series standards, The Pallid Man threatens Dr. Railly, telling her she needs to stop asking questions, and we learn that he is responsible for the tragic events that sent Jennifer Goines to the mental ward. This turns things around for Cole, who now discovers he has a serious adversary, not to mention that he’s up against some group that at least calls itself an army, which means his mission to mess with time has turned into a very different affair. Besides which, his future team has learned that there are references to this army all over the world, so the whole “let’s just whack this one guy” theory is out the window, and the whole “send one guy back in time” might not be able to amount to much, no matter what we have him do, or how many times he goes back.

Before talking the show up, it must be said that the show has several sticking points that could easily throw any potential viewers off. Many of these may not be deal breakers for most, and the positives may outweigh them, but they are still there. Some of them are rather nitpicky problems found in any show that is going to continuously use time travel, and more are bound to turn up all the time, while others are just part of the design we’ve opted for.

For example, Cole’s “boss” in the future is Jones (Barbara Sukowa), and it isn’t even necessary to describe their relationship for that to be somewhat problematic. The world is all but destroyed, and the total number of living humans is so small that it is hard to believe. Our future story gets its spark when some scientists “return to the surface,” (which is left unexplained) and stumble upon, and then finish, research into a way to travel through time. The problem here is that Jones, an old-er-ish woman leading a group of decidedly unfit scientists, is magically in charge… of anything. This becomes difficult to watch as Cole begins to butt heads with her, because she leads no force, is not in charge by virtue of anything we’re presented with, and we’re repeatedly given to understand that there is basically nothing, anywhere, for her to be in charge of anyway. Of all the things Cole thinks about the situation, one of them is apparently not, “or I could just kill you and be in charge myself, and what’s going to stop me?”

It’s a small enough thing, so long as the show moves forward with something as the episodes roll out, but it is a bit strange.

There is also the matter of this being so complex a system that is being laid out before us, that there are going to be times when the plot moves the way it does only because it has to get to the next step. That is, as opposed to how the characters and situations we’re given might believable progress through whatever seems to be going on at the time. If the show is otherwise solid enough, that’s something that can also be forgiven, but it’s a delicate balancing act.

That out of the way, the show is (so far) inventive and well-written, and while the actors are not perfect (with the exception of Tom Noonan), they are doing an impressive job under difficult circumstances. Aaron Stanford, probably best known for his role on Nikita, has too much to do, and no way to do it, but he manages it anyway. This is a role that is at times difficult enough for any actor even to deliver with a straight face, much less get just the right level of drama out of, and Stanford carries the show well. Don’t get me wrong, that “straight face” line probably makes it sound like the show must be bad by definition, but let’s be honest here, there are several scenes that have Emily Hampshire doing a really fierce, “crazy Ally Sheedy” impression at him while screaming, “The monkeys aren’t real!” and you can’t blame a guy for needing a couple of takes there.

The final potential problem is exactly what sucks you in now, and what makes the show so interesting. As I said, it’s well-written, which means it doles out the twists in a believable way, while also throwing out enough of the wild ride to provide the zigs and zags that keep you guessing. That’s good, because like LOST (at the beginning), it means that you’re on the hook, wondering what the hell is going on, and having a lot of fun doing it. It might turn out bad, because like LOST (after the first three season), the writers might be making it all up as they go, and all that cool stuff might not actually connect to anything, or having any meaning.

Will Cole, for example, actually go back to meet characters at earlier points in their lives, and if so, will it truly be meaningful to the plot, or will it just be gimmick play?

So far, the show is a lot of fun, and mostly lives up to the expectations of the film, and Terry Gilliam’s stylistic effort, at least, as much as a show could probably hope to manage the feat. It is still a nerve-wracking show to watch though, because the theory of the show means that it could turn into the goofiest nonsense ever very easily, and very quickly.

By the way, if you think the fact that the show connects with Phillips Hue lights is just another goofy marketing tie-in, it’s actually pretty awesome.

Inspired by the classic blockbuster film, which commemorates its 20th anniversary next year, Syfy’s anticipated adventure thriller “12 Monkeys” explores the provocative story of a time traveler from a decimated future in a high-stakes race against the clock. Utilizing a dangerous and untested method of time travel, he journeys from 2043 to the present day on a mission to locate and eradicate the source of a deadly plague that will all but annihilate the human race.

It's official, Stranger Things 4 is on the way, though things are strange indeed as the series moves forward. As much...
Read more

The elevator pitch for Utopia Falls, a new series coming to Hulu (and CBC Gem in Canada), is hard to imagine, especially...
Read more

Fans of Fleabag have something new coming that they are going to want to get on their radar, though it looks like...
Read more

The elevator pitch for Utopia Falls, a new series coming to Hulu (and CBC Gem in Canada), is hard to imagine, especially...
Read more
Television

Mr. Mercedes is a certain sort of triumph, but it isn't going to be for everyone. It's a great character study, and you'll wish you could binge it, but you'll also want to fast-forward.
Read more