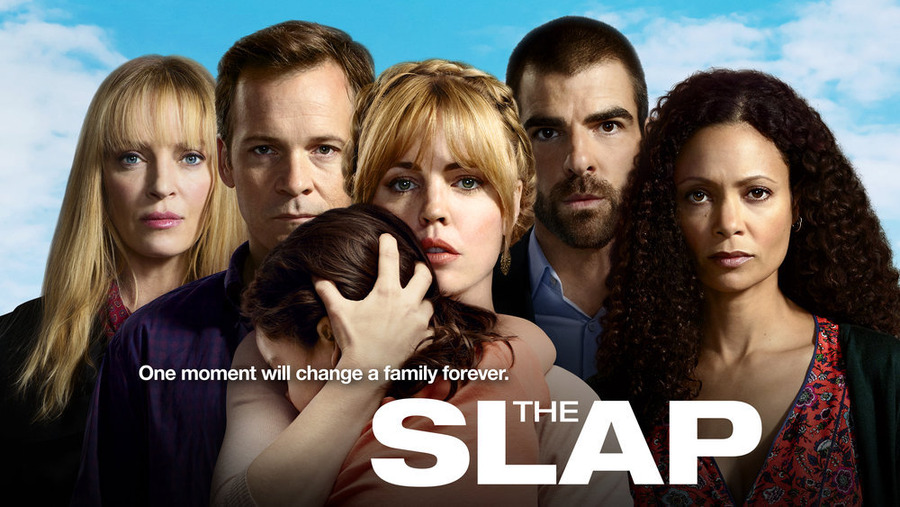 The Slap, an 8-episode recreation of an Australian miniseries, which is based on a popular novel, is NBC‘s latest attempt at “Event Television,” but it is a tricky, sloppy effort that purports to be an examination of, to varying degrees, “reality,” but in the sense that demands the quotation marks.

As the promos, and name, give away, the show revolves around what happens to a family when one moment, a slap, throws everything into turmoil. This leads us to, as we get toward the end of the show, a great many secrets being revealed.

There could hardly be more of a misrepresentation of what this show is about.

After watching the show’s trailer, and perhaps hearing a very basic outline, you might get the idea that the show is about trying to get past a horrible mistake. A child is shown to be rather unruly, and his parents refuse to discipline him in any way. As his behavior escalates, we suddenly find ourselves in a situation of immediate danger, with the child swinging a baseball bat at the head of another child. Presented with this situation of potential, life-threatening danger to his own son, a father slaps another person’s son. Even the trailer gives it away that this isn’t exactly what happens, but you might expect it to play out more clearly in the show.

But, this isn’t what happens at all. No, what happens is that Harry (Zachary Quinto), who is clearly an insufferable bastard from the first moment we see him, not only hits a kid, but can’t imagine that anyone questions the fact that he did it. In fact, he comes pretty close to taking a swing at about four different people right after.

To make things more fun (and meaningless), Rosie (Melissa George, curiously reprising the role from the Australian version), the mother of the boy who was slapped, isn’t just any normal person who might take exception to the fact that someone else hit her kid. No, she’s straight out of Away We Go‘s “why would I want to push my child away from me,” school of clinical (and goofy) over-protectiveness.

Poor Hector (Peter Sarsgaard) is stuck in the middle, and the show starts out as we’re preparing for his birthday. You’d think he’d get a chance to have a better time.

The show is given to you from a different character’s perspective in each episode, which is a unique, and interesting idea, and we kick things off with Hector. (see Australian show’s promo below for a broader view of what’s going on in the show)

Hector has his own secret, but even that is made overly simplistic. It isn’t enough to just have a guy and his affair, and the repercussions that normally has on any relationship and/or anyone. No, this is a bad affair, which puts Hector into our pile of crazy outliers who are the subjects of our “real,” discussion about clashes of perspective and culture… or whatever.

I have to admit that I like the theory, and I imagine that the original show, and the novel, are far less ham-handed in their delivery (because people liked them, and that is what I have to imagine), but this one paints things so broadly that it loses whatever power it might have had by approaching hyperbole gone absolutely wrong.

I similarly like the theory of The Real World, because seeing what happens when people of differing views are forced to interact is practically the definition of interesting human interaction, but when the execution of that theory means finding the biggest assholes and nutjobs you can pick out of thousands of applicants, the ability to engage melts away. Sure, people will show up for any trainwreck, but that doesn’t mean it has something to say.

The show still has a guilty pleasure appeal, and because the actors are all miles better than the material, there is something to be said for watching them, as opposed to paying too much attention to what you’re watching them do.

If you watched Gone Girl, and thought that at the end the whole thing went a little too nuts, which made the rest of it lose a lot of the appeal it had while you were enjoying, you may not make it through the first episode. If, on the other hand, you thought Gone Girl was absolutely brilliant from beginning to end, do not miss The Slap.

“The Slap” is an eight-episode miniseries based on the book by Christos Tsiolkas and Australian television series (“The Slap”) produced by Matchbox Pictures.

Meet Hector (Peter Sarsgaard, “An Education,” “Blue Jasmine”), a public servant, husband, father and valued friend on the cusp of his 40th birthday. Meet Aisha (Thandie Newton, “Crash,” “Beloved”), Hector’s beautiful and intelligent wife who is planning his party filled with friends and his very boisterous Greek family. Sounds like the makings of a great day, right? Wrong.

As Hector tries to navigate family politics, awkward friendships and the young woman he is dangerously captivated by, the built-up tension explodes when Hector’s hotheaded cousin slaps another couple’s misbehaving child. Everyone is understandably stunned, and the party abruptly ends with the child’s parents vowing legal action. What the hosts and guests don’t know, however, is that this moment will ignite a chain of events that will uncover long-buried secrets within this group of friends and family … and vigorously challenge the core values of everyone involved.

From writer/executive producer Jon Robin Baitz (“Brothers & Sisters”), executive producers Walter F. Parkes and Laurie MacDonald (“Gladiator,” “Men in Black” franchise) and executive producer Lisa Cholodenko (“The Kids Are All Right,” “Olive Kitteridge”), who also directs the pilot, comes this unflinching look at how one little slap can have a huge impact.