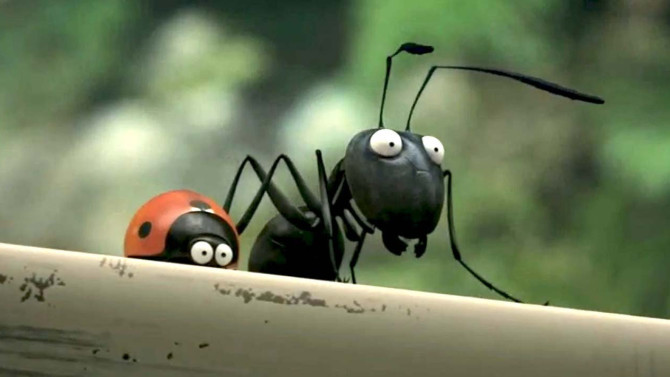 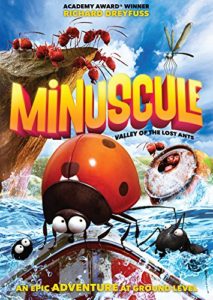 Minuscule: Valley of the Lost Ants, based on/built from the TV show – Minuscule – The Private Lives of Insects, is not just an animated adventure, but a kind of artistic experiment.

It’s a story told visually, with no dialog beyond the hoots and squeaks of ladybugs and ants, which makes it a challenging experiment already, but it is also an experiment of form, structure, and thematic content. It’s an effort that ultimately betrays the European sensibilities responsible for it.

A ladybug gets separated from her family, and finds herself in a lunchbox that a group of black ants are very interested in. She (just based on the “ladybug” standard) is dragged away by the ants, who are after the sugar cubes, and when some nasty red ants get involved, the adventure begins. Our ladybug has to figure out, not just the situation she’s in at the moment, but being newly born, life in general, and what she’s going to do with it.

She finds herself in difficult and confusing circumstances, focusing on a lot more variables than simply the clash of ants, and our ladybug manages to struggle through in a fantastically engrossing way.

The real gamble of this experiment is putting forward the idea that kids will sit through what is basically a silent movie (without even narration, apart from two sentences at the very beginning), and if they will, will they get anything out of it. Both questions, even as theoretical notion, require great work by the creators. The characters have to be captivating, and the structure has to be such that the intricacies of this very complex story are delivered.

The movie not only passes the test it creates, but it does so in a way that showcases the magic of exploring and learning. My own test subjects were enthralled in a way rarely encountered, and they were clearly in love with the idea of “doing work” in order to watch. From simply piecing together what was going on, and why the ladybug was making certain decisions, to (and, I think, because they were forced to watch with a different mindset) figuring out aspects of story construction generally. There is so much going on, that the experience went on long after the film ended, and involved conversations about why the sad moments seemed so sad, to the way the film didn’t end, and why it didn’t end the way “movies are supposed to end.”

More than just the story, and the capabilities of the animated characters, the combo of reality and animation is intriguing enough to pull viewers in all by itself. The uniqueness of the effort is almost jarring at times, and I have to think is fascinating for kids, especially as the film flips back and forth and we watch the animated insects scurry through a real dollhouse, and ride a real lunchbox as it floats down a stream.

I’m not sure that it will become anyone’s favorite movie, or that it will go into the mix of the frequently requested, but it is an experience to watch like few other films, and young and old alike will love it.

The DVD comes with three bonuses, all of which are in the Making Of/Behind-the-Scenes category, and though none of them stand out as especially interesting to the younger crowd, there is something to be said for seeing how this came together. Most impressive is probably watching the giant arm zoom around with the camera in order to create a lot of the “flying,” especially because the older youngsters may have no clue how such things are filmed.

After a couple leaves their picnic in a hurry, a gang of hungry ants moves in to steal what could be their most coveted treasure: a tin box filled with sugar cubes.  But before they can get away with the loot, a newly-born ladybug strays from its own family and gets trapped inside the box!  The ladybug is soon spirited away by the ants as they try to transport their prize across the woods toward their colony. Together, the insects embark on an epic journey to protect their sugar.