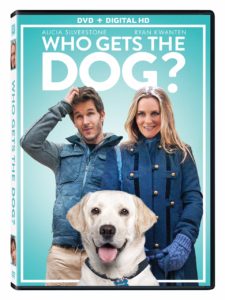 Who Gets the Dog? is an effort that falls in line thematically (sort of) with the plethora of holiday movies that hit places like Lifetime Movie Network every year and are loaded with actors you recognize, but aren’t quite on the A-list anymore.

Alicia Silverstone might be a surprise in such a film, but beyond that this one is – minus the holiday theme – just the sort of “friendly” effort that demands you play along with a simpler kind of story. If that isn’t clear from the premise, the film sets the stage in its opening, as Clay (Ryan Kwanten) and Olive (Silverstone) explain their divorce to their dog.

You don’t have to be a serious dog person to get something out of this one, but it doesn’t hurt, and the film may well become unwatchable for those who aren’t willing to play along with dog whisperers and court battles for dog custody. buy flomax online https://www.mabvi.org/wp-content/languages/new/flomax.html no prescription

The movie follows the general story that is as laid out in the title as it ever is, and it travels a familiar route to get through the difficulties of figuring out how to break up, and how to handle living beings that both people feel attached to and responsible for. There are few surprises, if you don’t count canine therapists, though the film at least manages some laughs, largely by way of Clay’s best friend, who can hardly be bothered to pay attention to Clay’s problems. buy lopressor online https://www.mabvi.org/wp-content/languages/new/lopressor.html no prescription

This is a film that tries to get an audience to invest in the struggle, but moves through its plot with such well-intentioned sugar-coating that it rarely manages the suggestion of struggle at all. When it does, it gets there by way of things like court-ordered custody of a dog, which it offers with such a straight face that you might believe it’s an actual thing. It might be, though I’m disinclined to learn the truth of the matter, but true or not the film takes the further step of having the court assigns an animal psychologist to evaluate the dog’s mental health and advise on who should get custody, and at that point the film either has to declare itself a silly yarn, or become a call to arms.

It isn’t hard to guess where it’s going, and the juvenile and embarrassing “visit” to Clay’s trailer lets you know, if you didn’t already, that the movie doesn’t think too highly of you. buy lotrisone online https://www.mabvi.org/wp-content/languages/new/lotrisone.html no prescription

It’s the lightest of fare, and you have to give it room to offer something that just wants to give you a bit of entertainment, but the story feels more like a dare than something anyone wanted to tell. Worse, our main characters have trouble convincing us that they ever liked each other at all, much less were involved in a very long relationship, but are nevertheless more cordial to each other most of the time than you’d expect from the situation. That oddly makes sense when you think about it, because they don’t seem invested enough to bother getting that angry, which is a decidedly curious thing to find yourself thinking within the doggy custody battle.

This is all to analyze the thing too much, but the armor of a weak effort can only get you so far. It’s a movie with solid moments, and it actually delivers well within the realm of escapist fun, but it could have easily maneuvered itself into something with a legitimate claim to your attention. It hints at exploring the connections that can’t be broken, and a new look at custody battles generally, but it doesn’t dare to actually dive in.