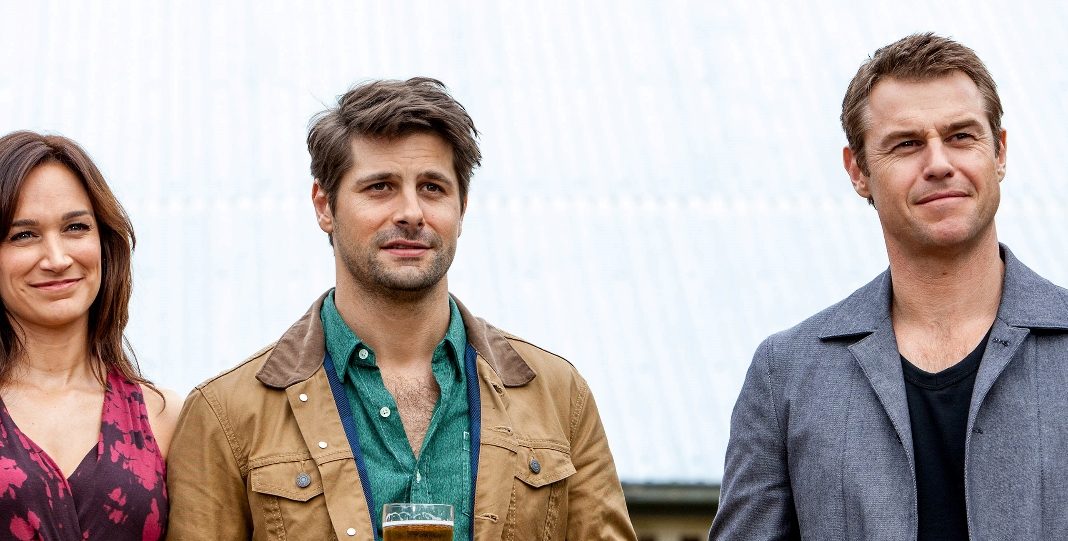 A little bit Northern Exposure and a little bit Doc Martin, The Heart Guy (Doctor Doctor in its native Australia) is another entrant in the “talented Doctor forced to tend to small town rubes” genre. Much as it may seem that we wouldn’t need another run at such a pinpoint premise, it turns out that we may need a few more, because it apparently can’t miss.

The uniqueness to the spin here is that our Australian heart surgeon, Hugh Knight (Rodger Corser), is put on the Impaired Registrants List after his party lifestyle takes an ugly turn, and he has to serve a year as a GP in a rural area as his punishment. The kicker is that he is assigned to his own hometown, which means he gets to see a lot of his parents and his ex-girlfriend, Charlie (Nicole de Silva), who is now married to his brother, Matt (Ryan Johnson).

As you might imagine, the situation offers up a mix of local eccentrics, often with curious maladies, and the people Dr. Knight would perhaps prefer to have kept in his past… a la Doc Martin, but we also get an assortment of interesting co-workers for him to deal with. His boss, Penny (Hayley McElhinney), isn’t interested in how great Dr. Knight thinks he is and doesn’t hesitate to remind him of the fact that if she doesn’t like his performance, he’ll never get his old life back, but she’s only the leader of the quirky crew and/or workplace he has to navigate.

The series kicks off with what is perhaps the most difficult 15 minutes that leads to a great show in television history. Establishment is always hard, and this is a show that is setting up a complicated web, so veterans won’t find it too much of a stretch to allow the show some leeway. Dr. Knight is put on display in a way that is overly grandiose, especially since the guy we end up with isn’t as hard to warm up to as his introduction suggests. The sprint toward his punitive arrangement slams along too quickly, and we might have been able to better warm to the show if we got a little bit more of the character instead of just a rundown of the establishing bullet points. Beyond that, Penny is just a little too… in general.

Once we get through that, the show can just ease you into its charms, and while things are familiar, this is a show that legitimately thinks it can do something more with the idea. Like the other shows I’ve mentioned, this one is just a good excuse to have a show about this town and the life of its residents, while shoving a character who is arrogant, but ultimately a good guy, into their own personal hell so that they can learn something about themselves. If you work the right sort of characters into that mix, it really is hard to go wrong.

Corser is up against it trying to hold his own against the likes of Martin Clunes, and he puts his own spin on letting the charm slip through to great effect. He has different hurdles, like the impossible relationship he has with his brother and his ex, and he has to walk a slightly different line, but he has nailed Dr. Knight’s ability to only infuriate everyone around him in a mostly theoretical sense. On paper, you can’t stand him, and that’s probably going to survive being introduced to him, but his heart actually is in the right place, and though he won’t even really try to win you over, he’ll manage it all the same. Delivering that sort of anti-hero is a lot trickier than people probably think, and Corser nails it, especially as you get into the middle of the 10-episode first series.

But, any fan of such shows knows that it’s the ensemble that makes or breaks it. You can’t be a fan of Northern Exposure without falling in love with the residents of Cicely. Here, while there is a lot more connection to several of the major players, both patients and co-workers fit the bill wonderfully, giving rise to Dr. Knight’s exasperation and opening the door to creating a new outlook.

Some viewers may find it a little too patched together from other offerings – Dr. Knight even has to take a tiny plane to some of his patients – but this is one that will win you over and a lot of people will binge this one.

The Heart Guy is available on Acorn TV and it’s a streaming service that’s a no-brainer for Anglophiles and/or lovers of great television. https://acorn.tv/heartguy