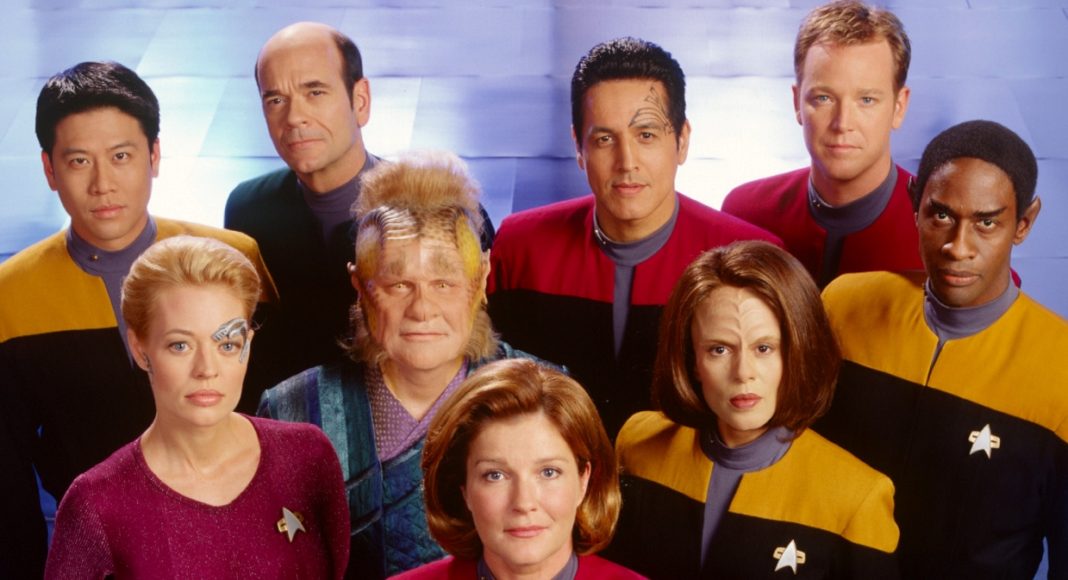 Star Trek: Voyager hit airwaves at a time when television was a very different beast, but even considering a world that didn’t demand ratings in the same way as today’s standards would suggest, there were some serious question marks as this one progressed.

The show was obviously buoyed by the general Star Trek fan base, as well as the success of Star Trek: The Next Generation (which ended just as this one was kicking off), and the relative success of Star Trek: Deep Space Nine (which started two seasons before this), but it lasted through the first couple of formative seasons largely because it was the highest rated show on upstart UPN, which had this as one of its initial offerings.

Much as everything Star Trek is bound to win people over, to some degree or another, Voyager was a pretty goofy effort for the first couple of years, moving thing (much as Deep Space Nine did) to an avenue that was almost campy, and at times nearly self-mockery.

The show hooked people with the idea of a female captain taking the spotlight, and Kate Mulgrew (now of Orange is the New Black) was a solid Captain Janeway, even if you had to wonder about some of her decisions once the ship was lost 70 years from home.

That “lost” premise was a good one too, but the show didn’t figure out how to work with the idea until well into season three and beyond. The premise seemed like an idea that eluded the writers after a while, because while new friends and enemies was a welcome idea, the fact that we would spend months busting our ass towards home only to have the same people show up ahead of us began to detract from the overall effort. It became a serious fan joke to wonder what the hell circles we were flying in.

The show mixed interesting ideas with a few too many time travel stories, and the previously-mentioned repetitive encounters with the same people. But, it also fell in love with the holodeck and spent a lot of time with The Doctor (Robert Picardo), ne’er-do-well Tom Paris (Robert Duncan McNeill), and first-mission crew member Harry Kim (Garret Wang). It managed to incorporate a lot of character development episodes, sometimes to its detriment, because these episodes were usually among the campiest curiosities the show had to offer. These episodes often revolved around holoplays, Tom’s favorite Holodeck bar, or a rap session with Leonardo da Vinci (John Rhys-Davies), and while catching some downtime with the crew, and/or the equipment failures/potentially deadly circumstances such would often involve was a cool addition to a show about people forced to be on the ship for 70 years, they were as rambling and pointless as they were entertaining. 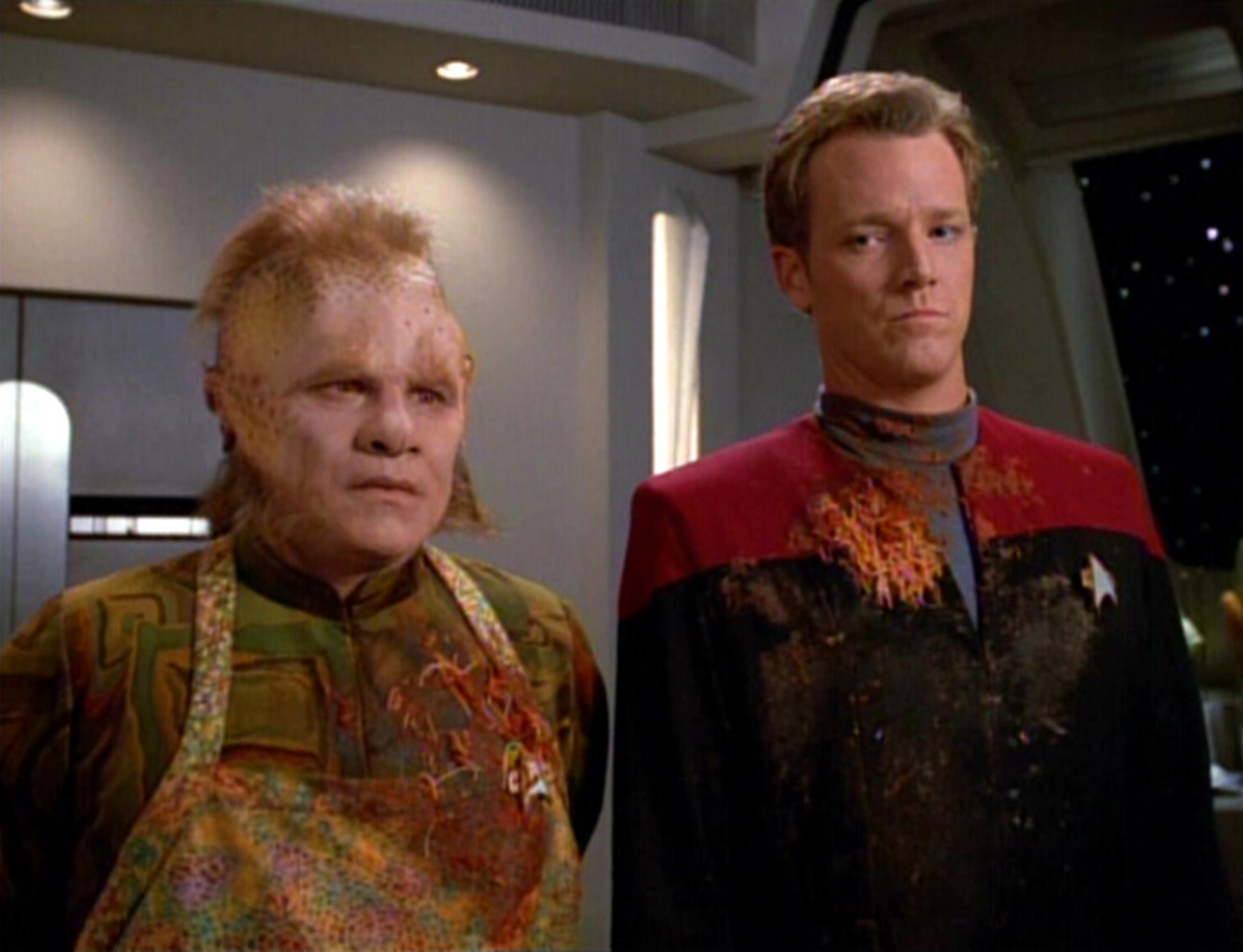 As much as Star Trek will pull along a certain demographic no matter what’s going on, the show wasn’t exactly lighting things up. Not only did it not really move much in the ratings, staying comparatively low on the charts and slowly losing viewers over time, it wasn’t quite taking over the community that was its demographic. Trekkies were fans, of course, but the show only had a solid “well, it’s on now” level of buzz.

Then Seven of Nine (Jeri Ryan) showed up in season four, and while the ratings didn’t take off, the buzz certainly did. It wasn’t something, unfortunately, that translated into a lot of help in growing the audience, but it launched it into the zeitgeist in a way that was never on the horizon for this show before. Like the iconic names from the original and TNG, people who didn’t watch the show knew who Seven of Nine was.

The show capitalized on her addition during seasons four and five, which might have been the show’s best, but the show began petering out in seasons six and seven, and as the show continued its slow decline, it became apparent that it had tried everything it could to keep interest alive. As the show tried to maneuver through seasons 4-6, it did manage to pick up some interesting guest stars (like Jason Alexander and Dwayne Johnson).

Still, the show is still a lot of fun, and though it did run along the campy line established by Deep Space Nine, it has characters that are well worth taking a ride with. Everyone got their moment to shine, while some of the cast became integral to the show’s ability to deliver its themes. Ethan Phillips stands out as the unsung hero of the show, and the long under-appreciated actor managed to breathe life into every moment he was on screen.

The show also holds up surprisingly well, and that’s perhaps based on the fact that it wasn’t trying to be serious, and wanted to play with the character study possibilities of the voyage. 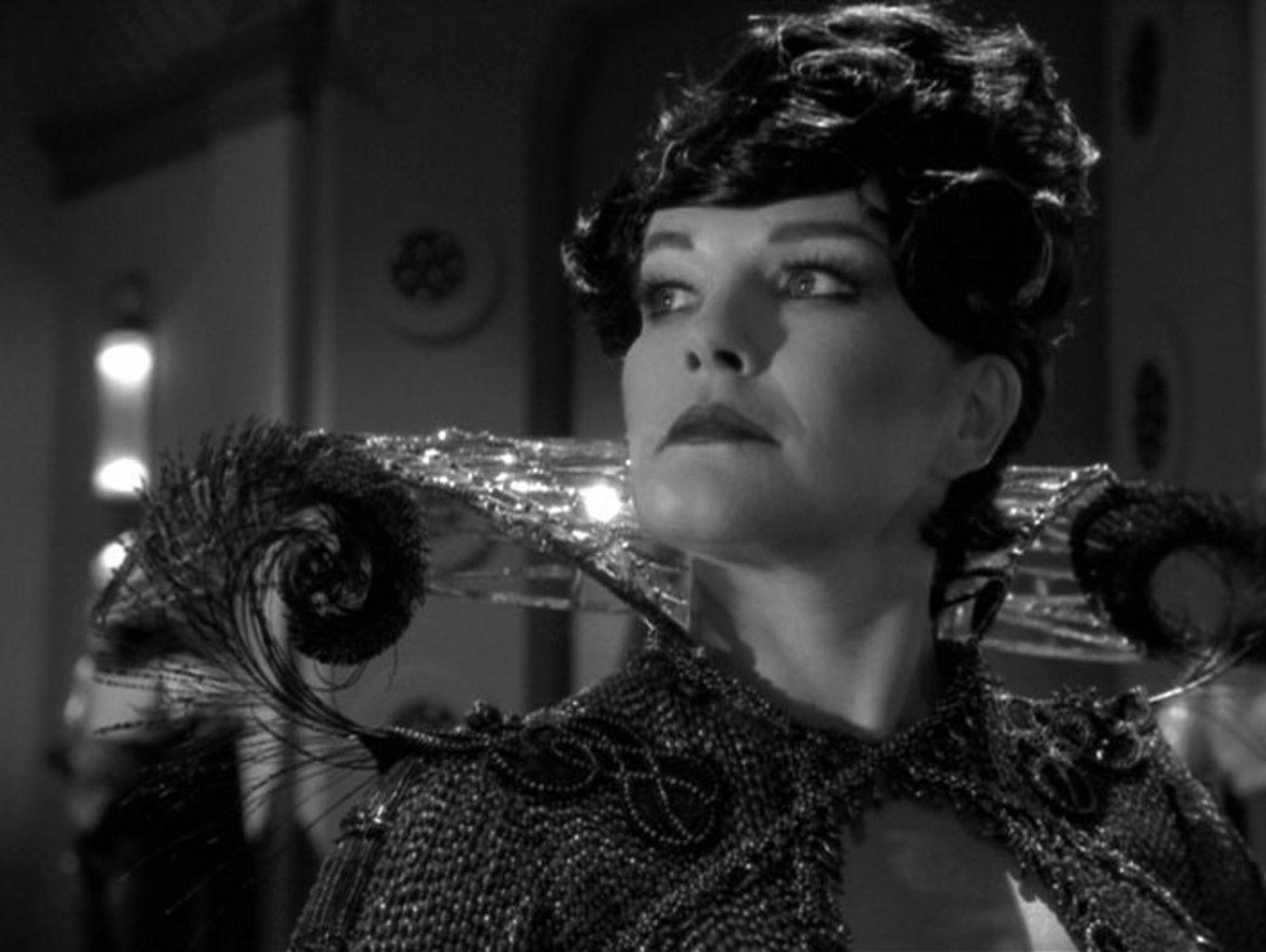 The new set of the complete series is not actually different from a previous release of the seasons, but that shouldn’t dissuade anyone from grabbing the chance to pick this up. It isn’t remastered/reworked, and the truth is that it isn’t likely this show will ever get such treatment. It’s actually bizarrely cost-prohibitive to take a full show like this, from 1995, and work that sort of magic on it. It doesn’t look fantastic, and if you have a truly gigantic screen that you’re hoping to watch this on, you’re going to be disappointed by the aspect ratio limitations and the overall quality. Still, it looks as good as most fans will need, and if you can put up with a few darkness problems and the expected lack of clarity, you’ll be fine. It looks solid enough for what it is.

That said, the release has tons of bonus features and if you put them all together, they are worth the price on their own if you’re any sort of fan.

It doesn’t have new bonuses, but it has a slew of them that date back to about 2003, which were created for the intial release of this set, which I believe was late 2004. There are a multitude of featurettes that have the cast examining their time on the show and their thoughts on certain episodes and/or their characters, and these are really solid gold moments. Each season includes a “Look back” featurette that runs down the creative process of the season, where the ideas came from, cast reactions, and more. Plus, there are featurettes that cover just about every aspect of the show, from the design of new aliens to the Borg Queen. And, there are several featurettes that cover special effects and similar.

It’s a great buy and a show worth having around to rewatch.