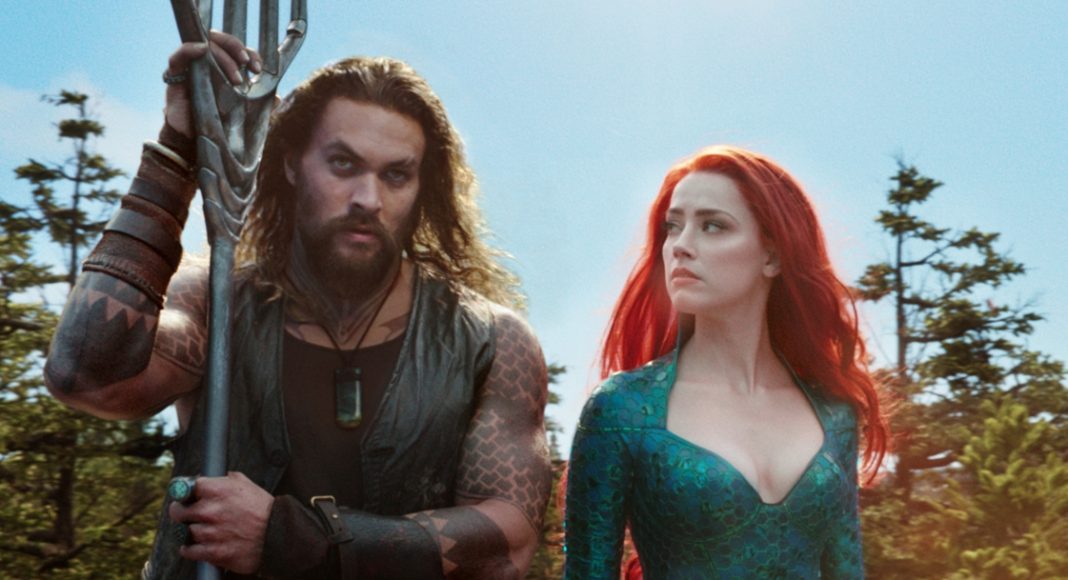 When it comes to the merging worlds of “popcorn film” and “comic book action” you have to be forgiving when the plot starts clawing its way out from under the spectacle of flash and often wacky kineticism. There’s also something to be said for allowing some leeway when it comes to fleshing out a world if you’re allowing superheroes their full due.

For DC comparison, Wonder Woman manages to walk a difficult line, embracing the suspension of disbelief requirements while holding onto reality and logic.

Aquaman, however, is a film that seems made by people who believe this means nothing has to make sense, and no two scenes necessarily need to be part of the same story.

The tragedy is that Jason Momoa, Amber Heard, and Willem Dafoe are a lot of fun to watch. Well, during the rare moments when it’s possible to stomach what you’re watching them do.

We’ve already met Aquaman (Momoa), but the film floods us with details of his origin anyway, and that’s because this is a film that is going to move us to Atlantis for our conflict. It turns out that there’s a massive underwater world populated by survivors of the original Atlantis, and now that world threatens to retaliate against the rest of us, largely for crimes against the oceans at large.

King Orm (Patrick Wilson), who is really just another psychopath as pseudo-villain, is going to unite the Seven Kingdoms of Atlantis so that he can amass an unbeatable army and take over the world and/or just slaughter the surface dwellers… or whatever.

Connecting us to these events is the fact that unwitting and unwilling Aquaman is a half-breed, the product of the union of Atlanna (Nicole Kidman) and a humble lighthouse keeper in Maine. With Orm on the warpath, a few people are on the side of not being crazy, and Princess Mera (Heard) finds Aquaman, hoping to convince him to find a mythical trident and overthrow Orm before it’s too late.

Meanwhile, Orm has a pirate on the payroll, and he kits him out with what are basically magic weapons that said pirate inconceivably reverse engineers to create a super suit and become Black Manta.

This all sets us up for a plethora of excuses to dive into any action sequence our effects company might have already come up with, and there’s little reason to suspect the entirety of the film wasn’t itself reverse engineered, so to speak, from a variety of spec clips of underwater battles.

These action scenes are sometimes and coupled with some of the more interesting breaks for dialogue, might be spun into a story. Here, the overall product is so nonsensical that paying any amount of attention makes the commendable effort by the actors a struggle with futility.

Aquaman is almost immediately revealed as not merely bulletproof, but nigh indestructible by any means. This leads us into a challenge, because we want our protagonist to have some sort of difficulty, with King Orm, a milquetoast fop if ever there was one, and we’re given to understand Aquaman has no chance to win, because by Atlantis standards he’s a wimp.

In the almost furious charge toward every superhero story being about a threat of total destruction of everything, and the upscaling of powers of everyone involved, Aquaman hits the point where godlike power comes full circle, and we’ve lost touch with what’s going on altogether. It’s one thing to have Kryptonite as your reverse deus ex machina-esque plot device, it’s quite another to have, “I dunno, some magic metal or whatever. Oh, and, like a plasma gun. Say, ‘plasma’.”

Given the we’ve created, built almost solely around slick , a whizbang suit of armor some guy in marketing knocked out, and a demand for a final battle with “more shit flying around than in that Black Panther one,” none of it makes sense anymore. At any point in the film Orm could pick four Atlanteans at random and tell them to go kill everyone on the surface, and nothing could stop them. Except that Aquaman can stop the Atlantean cannon fodder time and again. Except that he doesn’t have anything that should be able to hurt them.

Meanwhile, King Orm wants to unite the Seven Kingdoms, except he doesn’t actually mean that, doesn’t need anyone to follow him, and has a force that is already unstoppable. Hopefully, Aquaman can retrieve the magic trident, which doesn’t seem to do anything, so that he can again battle Orm in a one-on-one fight that amounts to little beyond yelling that Orm’s monkey style is no match for his improved tiger style.

Even all this would somehow be moderately excusable if not for the fact that the visual effects are at times painful, at others sad and dated, and occasionally include giant octopi playing drums.

If not for the fact that Mamoa and Heard are almost freakishly charasmatic, and Dafoe is somewhat mesmerizing as he tries to inject a sense of reality into the buffonery around him, the film would be a total loss.