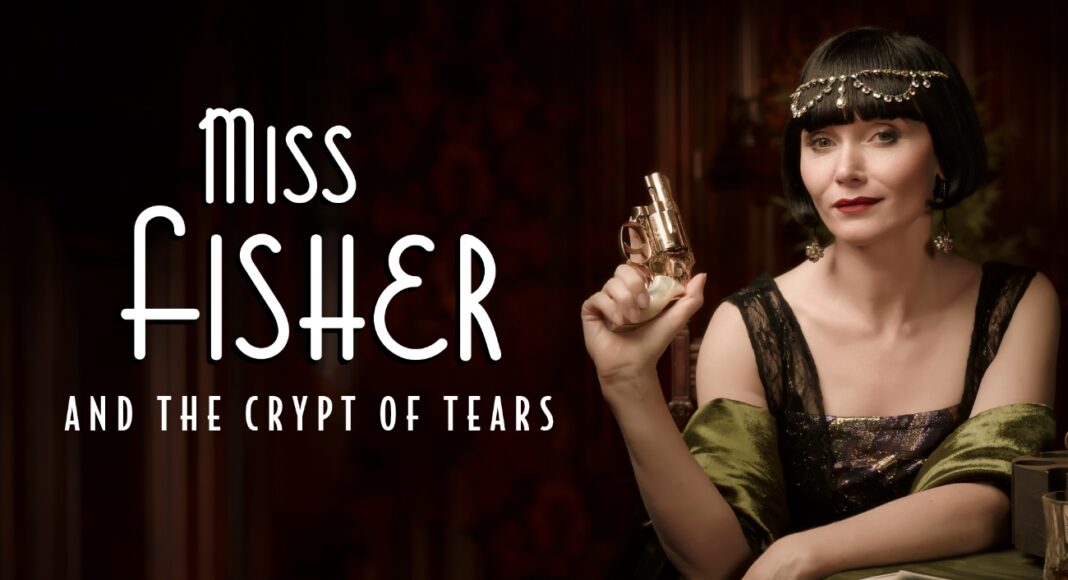 Miss Fisher is back in her first installment since 2015, when the third season aired in Australia, but this time it’s in a feature-length adventure, Miss Fisher and the Crypt of Tears.

Essie Davis returns as 20s-era detective Phryne Fisher (from the rather brilliant Kerry Greenwood books) and this adventure will find her traveling the world as we open our story with her rescuing a Bedouin girl (Izabella Yena) from unjust imprisonment in Jerusalem.

While the series has always been a sort of love letter to the 20s itself, and the film stylings of a bygone era, in Crypt of Tears things are perhaps taken up a notch as Fisher and crew spin from one genre trope to the next. That may sound like a negative, but fans of the series will likely find themselves falling in love with the homage to film efforts of the past, complete with curses, treks through the desert, quicksand, and love/irritant relationships.

It may play a little heavy on appeals to wardrobe (a facet of its homage) and the ultimate mystery is more of a battering ram than a sly maneuver (again…), but it manages to create something of the wild adventure genre it hopes to evoke, and that’s tricky enough without inserting a character like Miss Fisher into King Solomon’s Mines. Moreover, the thematic expansion of the series’ world to something that takes us far beyond what we’ve seen before with Miss Fisher feels like it makes a lot of sense. Fisher’s longtime romantic admirer, Detective Inspector Jack Robinson (Nathan Page), and crew, get a story for Fisher’s absence, which translates into an excuse for sparks to fly.

With a story that takes us to several parts of the world, and involves a mystery that has been hidden for years, along with the series norm “cutesy” escapades, Crypt of Tears is fulfilling entertainment that makes for a great continuation of the franchise. The stars are at their best, minus the borderline screwball opening, and those who are able to get on board for lighter fare mystery will have a new favorite.

Along with the new film, the first three seasons of Miss Fisher’s Murder Mysteries are also available on Acorn TV, and the streaming service has recently announced an expansion of their free trial from 7 days to 30 – the promo code is: FREE30