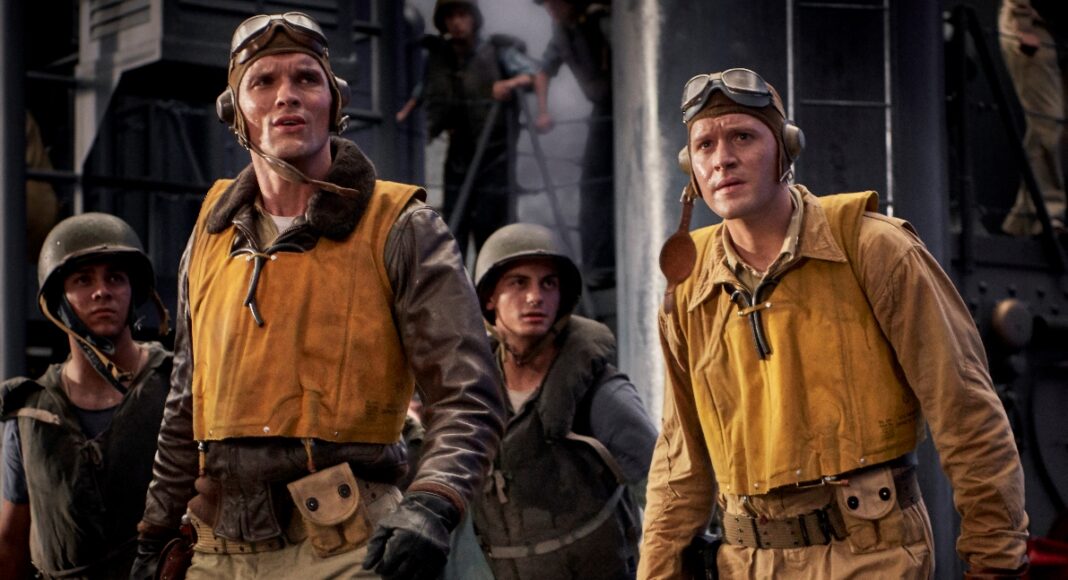 Roland Emmerich‘s breathtaking retelling of the Battle of Midway found itself unfortunately unable to manage the attention it deserved in theaters, but the home release of Midway is loaded with special features which will hopefully give the film new life. (Enter to win a copy of the Blu-Ray below)

War movies are a very particular genre of film. While some efforts have reached wide audiences, or even gone on to become among the most notable films of their generation, it’s a difficult line to walk when it comes to relaying some “story” that connects broadly while putting on screen the facts of a historic moment. Midway does not perfect this dance, but it comes a lot closer than most efforts that are as fixated on the specifics of one major battle, especially considering that it does not invent some mythical journeyman to walk us through things.

Midway opens with the bombing of Pearl Harbor and puts us on the shoulder of several characters as they deal with the immediate repercussions and try to learn how to overcome the Japanese Naval superiority. Whether that character is a pilot, potential codebreaker, Captain, or the person put in charge of the entire war effort, the film takes us through not only the high-flying insanity of battle, but also the chaos of scrambling leaders who just aren’t sure what to make of the scenario they find themselves in.

It’s a film that is, at many points, too beholden to its causes, which pulls the narrative apart, often when it is gearing up for its best chances to become an instant classic, but much of it is forgivable in the face of the madness of the attempt. One assumes there is some historical accuracy bent, for example, driving the inclusion of a certain submarine, but because it never proves relevant it’s a jarring distraction. Likewise, the cinematic world looking over the film’s shoulder and demanding drama leads to a few too many one-in-a-millions that end up necessary for the win, which ends up, unfortunately, sucking the life out of tension it’s trying to create.

That said, wherever the film doesn’t get lost trying to tell its story with gunfire and instead focuses on its characters, it’s a solid achievement. Most of the cast has rarely been better, and some of them have unenviable roles. Dennis Quaid and Woody Harrelson hardly have time to make a real impression, but they deliver the gravity of exactly these men in exactly this situation in a way most actors can only hope to ever achieve.

Most importantly, the film delivers the complexity of the overall struggle and manages to pull even the least “war-friendly” viewers into the truly human drama that’s unfolding.

The home release is loaded with a variety of extras (see clips below) and includes a commentary track by Roland Emmerich which is well worth a listen even if for those who don’t like the film. Not only does he, to a certain extent, explain how some of the things I find problematic came to be, his experience putting together adventure films leads to a variety of insights that are inspired and occasionally hilarious. At points, the commentary is much like a behind-the-scenes tour as he takes apart the creation of many scenes.

The rest of the bonuses come by way of a variety of featurettes, and while some (like the codebreaking featurette) are only as interesting as your interest in the details, most of them are going to be real treats for all fans. Most interesting is the one that tries to detail the extent of the effort to coordinate with the actual facts.