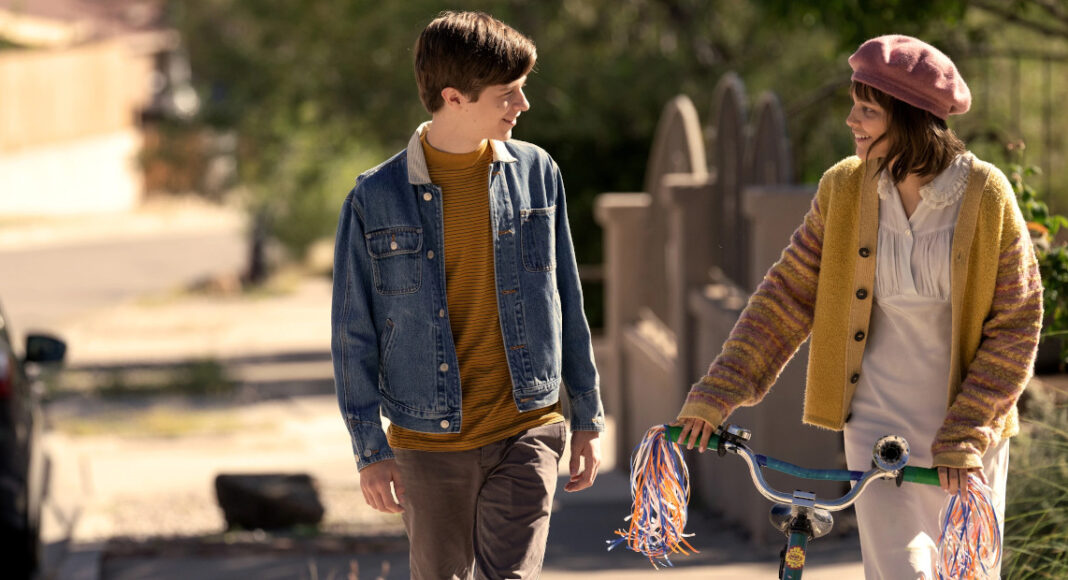 Some projects come down to a bit of luck, and while we could have found someone to play Stargirl, the titular non-conformist of the extremely popular YA novel, having someone for whom the story might as well be a biopic hit the scene is a boon that’s hard to ignore.

Largely the same old High School story, Stargirl distinguishes itself by having a character “struggling to fit in,” who isn’t actually struggling at all and has less chance in any case because she doesn’t even see “the game” happening around her. Beyond the obvious, like her homemade, quirky clothes, there’s a kindness to her perspective that is more alien than any multi-hued jumper.

As the film moves through its acts, which are delivered in clunky bursts, Stargirl moves more as a reaction than an effort, which works surprisingly well for the story. Instead of actually trying to fit in and thus changing herself, this is really the story of what happened to her.

Leo (Graham Verchere), the boy who finds himself mesmerized by the multi-faceted quirkdom that is Stargirl, serves as our narrator and might as well wonder why there are not more rare and magical creatures in our lives, even as he describes how he himself joined in the effort to rid the world of this one.

Grace VanderWaal‘s winsome personality is all she needs for the effort here, and to be completely fair, the level of difficulty for her can’t be all that high. Her script notes say, “Be yourself,” and if she’d have begun her America’s Got Talent career by introducing herself as Stargirl, we’d hardly be anywhere different as a result. But, much as we might have found the perfect, shapeless peg to fit in a hole that isn’t there, it’s hard to fault her performance. She delivers.

The curiosity, and brilliance, of Stargirl is that it’s an updated worry and a more sophisticated exclusion. Sure, she dresses weird and knocks out a ukelele tune in situations where no one else would, but no one really cares or puts her down for it. Her oddness isn’t her issue, and indeed, and I think true to a changing reality teens live in, her “quirky charm” serves her well. It’s the fact that she’s nice that removes her from the world. That makes her “other.” That gets her into trouble with those around her and finds Leo asking her to maybe tone down the “Stargirl.” That she’s nice.

The film doesn’t quite travel as far out of the pastel landscapes as the book, which is perhaps more confident in its audience, or more present with them, but it lays the same groundwork. It is, unfortunately, a mostly serviceable whole, and a lot of the potential is left for fans of the book to bring into it themselves, but it has a lot of fun moments. More important, perhaps, than even how “good” it is, it still sets you up to nail you with it’s ending. As Leo waxes philosophic about a person he once knew, maybe, and whether or not she had literal magical powers, or if the whole thing were possibly a dream, he’s answering a lot more questions than he’s asking.