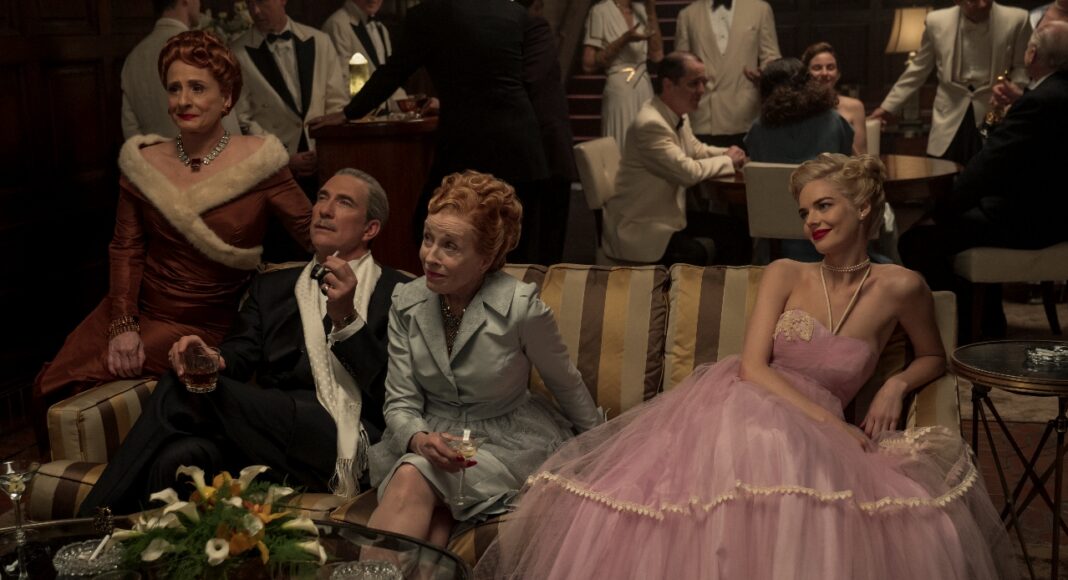 Ryan Murphy and Ian Brennan have teamed up for Hollywood, a new limited series for Netflix. The show wanders through the lives of several hopefuls in the biz, eager to make it in the post- World War II world of cinema, and willing to do whatever it takes. Fictionalized versions of real people, including Rock Hudson, aim for fame surrounded by real, realish, and fictional movers and shakers in Hollywood, and while there’s a lot of sex and drama, it takes a while before there is anything like a real sell to the adventure.

Jack Castello (David Corenswet) has moved to Hollywood with his wife to become an actor after serving in the war, but it turns out that’s hard to do, and banks don’t give mortgages to people who have “trying to be an actor,” as basically their only asset. But, he meets Ernie West (Dylan McDermott), a guy who runs a gas station front for his escort service, which quickly leads Jack to the discovery that in the solar system that is Hollywood, with its planets, moons, asteroids, and meteors constantly circling each other, the aether they travel through is sex.

With a lot to establish, and a slew of characters, the initial episodes simply tie everyone together in a web of sexual encounters that begin to make the mind boggle at the idea that movies actually get made somewhere within the throws of this madness. Rock Hudson (Jake Picking) comes into the picture by way of his eventual boyfriend, Archie (Jeremy Pope), who Jack has brought into Ernie’s business.

Meanwhile, Raymond Ainsley (Darren Criss) is trying to make it as a director while his girlfriend, Camille (Laura Harrier), is on her way to becoming a star… maybe. The groups come together when Jack may get the chance to work on a feature Raymond will direct. On the other side of things, everyone is getting close to execs and big wigs via Ernie’s Auto “Service.” The most fun the show has is to be found when Jack is trying to relate with various of his “dates,” including the wife of the owner of Ace Studios. He’s a torn, interesting character in these moments, and as much because he is trying to figure them out while battling with what the hell he’s doing there.

The series has the look and feel, perhaps not of the time, but of the way we’re used to seeing the time, especially in efforts at least thirty years old themselves. This is true both insofar as the style, dialog, and “cinematic mannerisms,” but also just in the business of Tinseltown offered up as a furious race to get very little done. Even in the early episodes, anyone actually connected to the movie business spends their time zipping from one office or restaurant to another so that they can sit and chat for what feels like eons. One of the series’ best efforts is showing the young and uninitiated as lost in the curiosities of culture as they are in the more obvious parts of the business.

As the stage takes shape, and the actual drama can begin, the series is largely focused on the clash between the naivete of those who thought they could just show up, work hard, and have a chance at taking over the world, and those entrenched in a system where power and opportunity are handed out on whims impossible to predict.

It’s a crass telling, to deliver blunt and desensitized people who don’t have time to care if you can’t hack it, because there are fifty waiting in line behind you. That opens the door for a richer dive into the psyche of a bunch of newcomers, and how they react to “the real world” slapping them in the face, but I’m not sure Hollywood actually capitalizes so much as it paints a convincing picture that it could if it wanted to.

The show is best when it is simply letting people be bewildered by circumstances that can’t possibly be real, and it doesn’t matter if that involves a trailer behind a gas station, or getting a break too big and sudden to be believable. It’s a show that likes its characters, or at least, strange and shifting ideas of its characters, but simply staring at them might not be enough for most audiences. If it’s something more than just a period soap opera, that is admittedly a lot of fun at times, it needs something more than a showcase of a kind of “zen of amorality” to make the case, and while Hollywood drifts near a purpose and/or “story” at times, it saunters off to another bedroom before it gets there.

Catch the show on Netflix – www.netflix.com/Hollywood