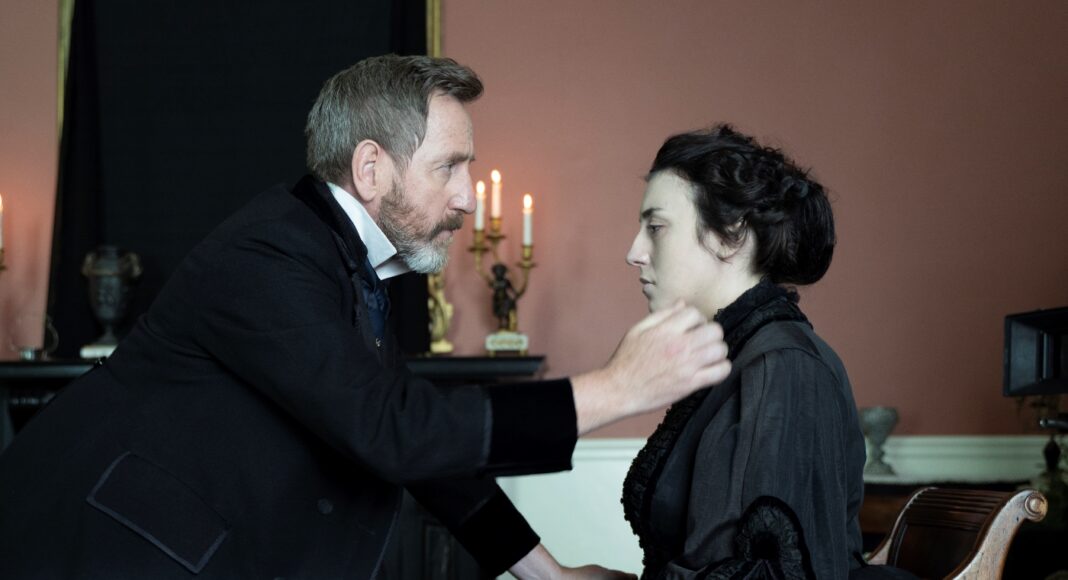 Period drama Dead Still weaves a bizarre mystery around a setting, and man, that are as intriguing as the criminal enterprise baffling Dublin police in 1880’s-ish Ireland. Brock Blennerhasset (Michael Smiley) is a renowned photographer specializing in “post-mortem photography,” the practice of taking photos of (and with) departed loved ones, an actual trend in Europe at the time.

Once a true pioneer in the world of photography, Brock is at the point when he is struggling to keep up with latest advances, and as cameras become cheaper and more popular, the industry of commissioned post-mortem portraits is on the way out.

As we enter the story, Brock is looking to revitalize his career with the help of his niece (Eileen O’Higgins) and a new assistant, Conall Molloy (Kerr Logan). Rather curmudgeonly, and set in his ways, Brock doesn’t exactly deal well with a new assistant, or some of the oddballs interested in his services.

Unfortunately, when you swim in certain circles, you find yourself in truly strange circumstances, especially when it’s 1880 and society isn’t all it’s cracked up to be. For a photographer, that may mean that people are looking for ways to produce pictures of a questionable nature. But, as Detective Frederick Regan (Aidan O’Hare) enters the scene, new avenues for photography also make their way into the world. Detective Regan is interested in the idea of photographing crime scenes, and wants Brock to help him, but he also may have a truly twisted murderer on his hands, one that is apparently photographing people as they die.

Putting it all together makes for a series that doesn’t quite have a recognizable genre. It hints at mystery/crime drama, but no one is exactly after solving anything, except in the sense that the detective is on the case. Brock’s gruff-yet-likable charm offers up a black comedy, and his customers provide almost episodic-style laughs and scares, but the world is intense and the connection to characters is nearly high drama. Then Brock and his crew are shanghaied into the smut trade, and if you thought you knew where you were to that point, things will shift five more times before you’re done. As we weave through the surprisingly chaotic life of a mild-mannered photographer of the dead, the murders are always lurking in the background, as is the suggestion that the killer may have some connection to Brock.

Dead Still is a slow burn effort that seems as interested in making the case that we could ditch the murderer altogether, and just follow the wild ride that is life in Dublin during the period, especially if you have a weird, but “tech” career. Throughout the initial episodes, we are hardly exposed to the killings, beyond small hints and the establishment of our detective. Brock is busy enough with family squabbles and seemingly supernatural subjects of his work. In fact, you can’t help but wonder, as Brock ruminates at/with a selection of his portraits, if you aren’t being led somewhere you don’t want to go at all… which is gripping in itself.

For any with a soft spot for “British” drama, who are open to throwing in a bit of “ghost story creepiness” that can’t manage a PG rating, this is curious, but brilliant entertainment. It ultimately owes as much to production design as the wildly engaging cast, because the time and culture become a character, especially as people are forced to react to odd circumstances.

Definitely one worth checking out, and a series exactly in line with what Acorn TV fans/subscribers are after. Check it out here – https://acorn.tv/deadstill_cs/