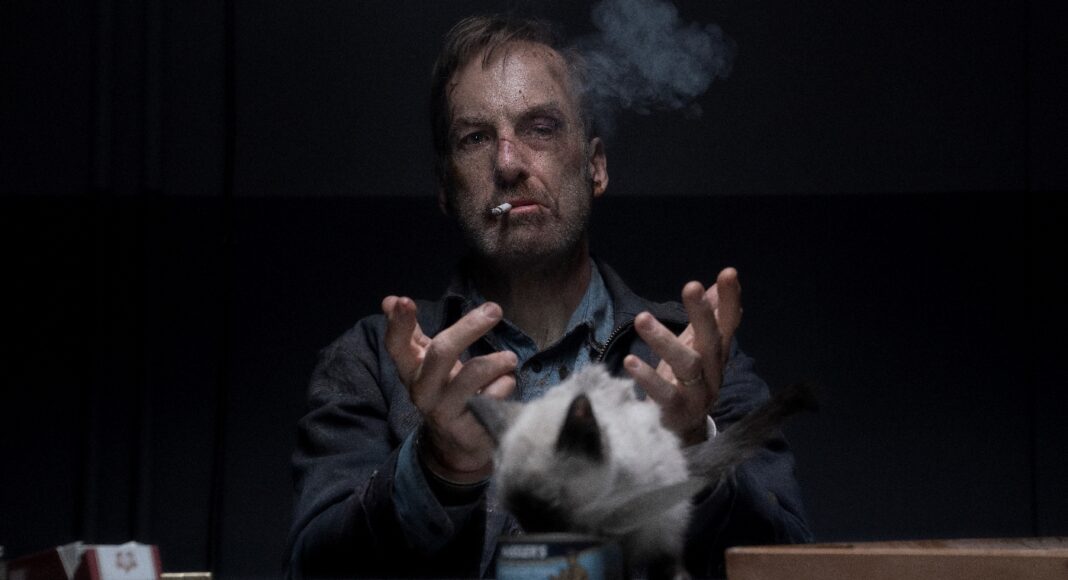 The similarities between Nobody and John Wick are pretty obviously legion, and though screenwriter Derek Kolstad doesn’t have much else on his resume, it shouldn’t be written off too quickly as simply going back to the same well.

Bob Odenkirk‘s Hutch Mansell is a “man out of the game,” trying to live a normal life, but he is not only a much more complex and problematic character, he also spends his “normal” life fighting an itch. Hutch isn’t thrown back into the game so much as the game passes too close to him while he’s having a particularly bad day. All of this (and more), though it may seem like trivial differences in progressing the plot toward a lot of action, changes everything about how and why things progress, and what, if anything, we’re examining.

Much like John Wick, Nobody reveals its world and character slowly, and without really explaining anything. Hutch works some sort of accounting job at a fairly small business, and a montage of days relays the drudgery of churning through an ordinary life that includes riding the bus to work and a routine that makes days difficult to distinguish from each other. If not for missing the trash pick up, would you even know it was Tuesday?

A burglary seems to put mild-mannered Hutch in a dangerous situation, and his response spurs some unnecessarily comic ridicule, but we soon learn that the events we witnessed were much more like an alcoholic walking into a bar and being offered a drink by everyone he sees. Try as he might to pacify himself with the standard “cooler heads” talking points (there was really no danger, they didn’t take anything worth much), addicts are unpredictable and you just never know what the trigger is going to be.

Hutch is soon embroiled in a battle with the most notorious mobster around, and in a somewhat tongue-in-cheek metaphor, one seemingly innocuous fall off the wagon threatens to destroy his entire world, his relationships, and the lives of everyone around him.

The film teases out details of the man we’re watching in a way that keeps you on the hook, but doesn’t necessarily create a cohesive whole in retrospect. Certain steps serve the progression or develop his previous life, but 30 minutes later they don’t exactly gel with the character we now have. The disconnect is never more clear than the film’s end, which doesn’t make sense… for this guy, but it’s hard to hold minor transgressions of development and exposition against a film that’s smart enough to otherwise keep you invested in a psychopath and his really bad day.

The action is refreshingly realistic, except when it’s not, with thugs getting their teeth kicked in and coming back for more, but the delivery doesn’t always stand up to a level of scrutiny beyond that reserved for comic action. Where Hutch’s analysis is a kind of theatrical unicorn, selling us a protagonist who constantly has us questioning our ability to root for him, the villain is psychotic in a way that was boring before you pasted him in from hundreds of other movies, and Thug #46 rushing in with reckless abandon and a lot of confidence after Thugs 1-45 have gone down with relative ease oozes its own lack of imagination.

Still, measured in terms of how well Nobody delivers what it was trying to deliver, there are relatively few distractions from the merging of hyper-kinetic action and systematic world-weaving, and Odenkirk is subtle and brilliant in his ability to give us varying levels of personas, motivations, and perfect responses. It’s another out-of-nowhere surprise, and one that is worthy of as much attention as John Wick, not least because another ride with Hutch’s psyche would be worth the price of admission.

Check out our podcast review below

Where to watch Nobody