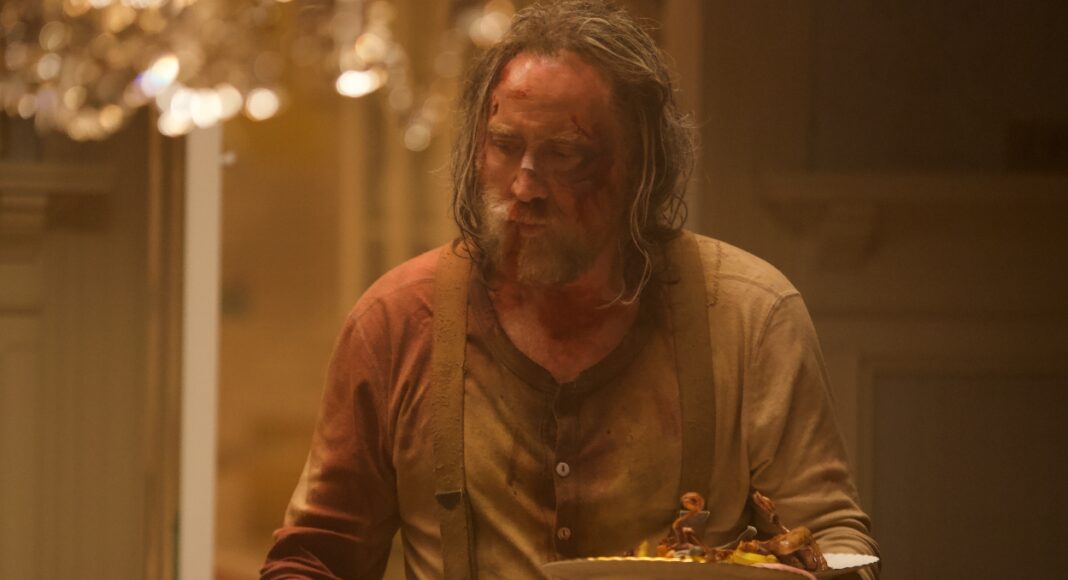 At a certain point in Pig, Nicolas Cage‘s character tells a chef at an ultra-fancy nightmare of a restaurant that, “You only get so many things to care about.” It’s a line that probably seems out of place in a movie about a hermit and his missing truffle pig. More importantly, it’s a line that should never be in a film at all because it’s too close to impossible to actually earn it. Cage manages it, and it’s something of a shock when he does, potentially pulling viewers out of the film as disbelief takes hold. It isn’t even the most difficult thing he delivers.

We meet Rob (Cage) as he meanders through his daily routine in the Oregonian woods. He wanders where his pig leads. He collects truffles. He stares into the canopy. He shuffles back to a “cabin” that looks like it’d tumble over if he leaned on the walls. He collects herbs that he has hanging about the place like some medieval witch’s hut. We meet Amir (Alex Wolff), a young player in the game of high-end ingredient supply, who moves Rob’s truffles for him. Amir is cocky, though that’s actually just what it says on his costume, and fancies himself as being “on the rise.” He hopes to soon take on his father, who apparently “runs this town’s restaurant supply game,” whatever the hell that means.

Kicking us off, Rob’s pig is stolen, and he has few connections to the outside world beyond Amir, who he promptly wrangles into the role of chauffeur. After quickly moving beyond the world of truffle hunters, who apparently camp in various parts of the forest, Rob is going to have to make his way to the Portland restaurant scene. After all, how many people are after a truffle pig?

Pig is a strange film, both by way of what it does and what it doesn’t, and the result is something that is most like an attempt to reinvent and modernize fable as a way of dissecting humans generally. At every revelation of who Rob is, the film should work differently, and as things come together, it should be trying to do something else. That it doesn’t, and that it isn’t, is at first humorous, then somewhat discomforting, then suddenly completely brilliant.

Rob, as we meet him, seems “broken” by just about any standards. He isn’t skipping through the woods, joyous in his choice to have removed himself from the trappings of modern life. He is, if you look close, perhaps a certain kind of content, but that’s a stretch of positivity. He’s grieving, and he’s been doing it too long. That’s the societal narrative.

It gets worse, because Rob is forced to reveal (to us, and to Amir) that he used to… have things. In the estimation of many it might be said that he had everything. It’s been years, and Rob’s grief obviously “went wrong,” long ago. It’s not an uncommmon plotline actually, and rather straightforwardly walks a character through the life they no longer have in some “It’s a Wonderful Life” spin as the audience gets to participate in their reemergence/repair. That’s how it usually goes.

Here, on the trail of his pig, Rob revisits the world of elite restaurants. He meets up with old coworkers, underlings, and those who clawed their way into positions simply for the chance to stand in his shadow. From “fable glorious” underbelly, to “fable soliloquy” epicureanism, Rob chases his pig from one hyperbolic void of humanity to the next, daring this particular world to excuse itself, or call him out. It’s a world of anti-fight clubs, celebrating anti-food, and “run” by anti-tough guys, and while Rob manages to let us look at it all, he really just wants his pig. His retort to anything is simply to exist near it, and it all crumbles in his wake.

At the end, Cage sits. Only a handful of actors could have delivered this scene, and you can’t even see him do it. Rob, never exactly a character in the first place, because this is a fable, returns to his grief, which is just part of something else, because he never was broken.

Catch our podcast episode where we cover Pig below

Where to watch Pig