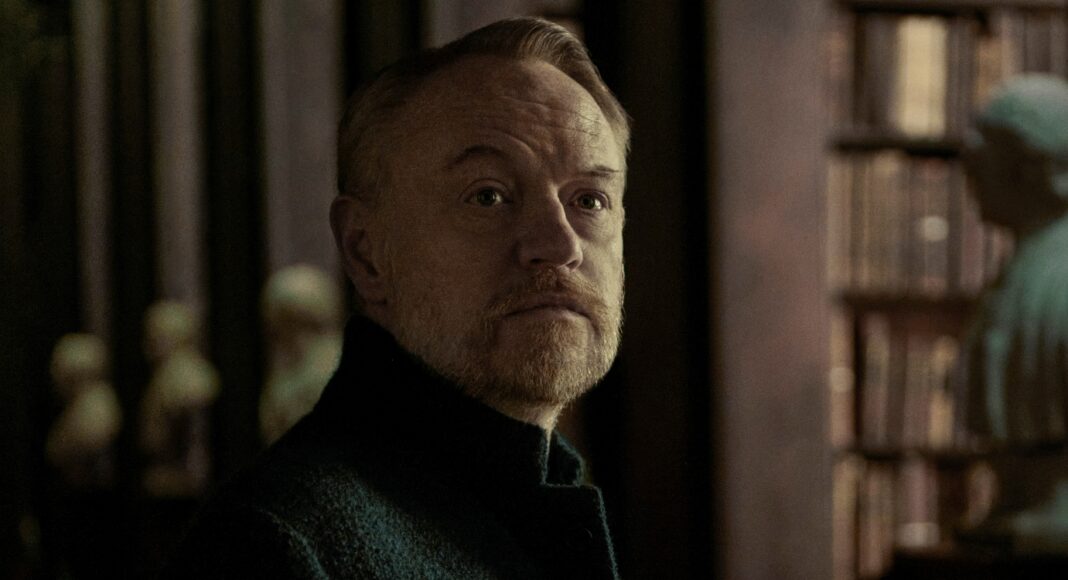 There are a variety of reasons that a book can hold onto the consensus opinion that it is unfilmable, but these are frequently overcome with time and ultimately involve special effects or other advances in filmcraft. The solution to the problem of adapting to visual media comes when someone decides they have a way to make it look like we’re in space, or whatever.

The other side of the seemingly insurmountable hurdle to moving from page to screen is when you have a work in which nothing actually happens. Sometimes a novel is inordinately focused on the thoughts of the main character. Sometimes, as in the case of Foundation, there is nothing but a string of conversations and setting description. Let’s face it, that’s at best a play. The “solution” comes along when someone looks at, for example, one of the most celebrated works of science-fiction in history, by Isaac Asimov no less, and decides they have a better idea.

In Foundation, the majority of the galaxy is ruled by the Galactic Empire. The Galactic Empire is ruled by Cleon I from the capital world of Trantor, which is at this point one city covering the entire surface of the planet and taking up much of the subterranean area as well. Hari Seldon (Jared Harris), a “psychohistorian,” declares that the Empire, which has existed for some 12,000+ years, is going to die in 300 or less and will be followed by a galaxy-wide state of barbarism lasting at least 30,000 years. He has a solution, using the principles of psychohistory, which can analyze the movements of large populations of people mathematically, that will lessen this period of barbarism to only 1,000 years. Because of this, Seldon is tried for treason against the Empire, and his recent recruit, Gaal Dornick (Lou Llobell), a mathematical genius, is brought in to refute his theory.

This may seem like a rather routine plot summary, but it is in fact nearly to plagiarize the book. Where the book barely mentions the Emperor, the series creates a new story involving the Empire being ruled by a string of clones of the original Cleon I, complete with a triumvirate of Cleons ruling at the same time, but of widely differing ages. This gives us a foothold to a variety of other spins that have no connection to the source material whatsoever. The Cleons have the opportunity to talk to each other about matters unrelated to anything and display their despotic, and fairly psychotic, tendencies when it comes to ruling a galaxy. They also repeatedly wander certain areas of their palace, especially that which contains a massive mural, apparently simply so that it can be seen. Because we have the Cleons we have them available to respond to an act of terrorism (which does not exist in the book), which means that the leaders of two lesser worlds (which have no business being mentioned at this point) can be put to the screws.

As the first two episodes unfold, we look in great detail at the Emperor/s and the city/planet, and bask in a truly inviting display of a wildly futuristic world. It’s subdued much of the time, giving Trantor’s spectacle a wash of magnified mundanity, but it is glorious spectacle nonetheless. Harris is, when given a chance, up to the task of mesmerizing with his self-assuredness, and the character Gaal does a superb job pulling us along as our intro to the Capital by way of someone from a largely “backward” planet. We are swept into the political intrigue with Gaal (just as in the book) immediately and it is difficult to avoid joining in for the headlong sprint (which here does not entirely take place in any serious sense). For style and imagery, the show could hardly have higher marks. The “sky bridge,” is worth a watch in itself, and seems all too real. The city/planet is wondrous. The sets and CGI almost unbelievable.

As the first two episodes end, Seldon finds himself in circumstances that make no sense at all and cannot really be made to fit within the grander structure of what is “supposed to happen.” Gaal is similarly put through events that don’t connect and frankly seem rather random. And, all of it covers some 40 pages of the book, and we are at this point not really meant to concern ourselves with any of them again, the grandiosely-constructed Emperor/s included.

Bizarrely, in terms of what portions of the series are invented, the expansions are all related to that for which we should need no information. Instead of expanding on Seldon to any great degree, or perhaps even psychohistory itself and something of its theories, we have new characters, a good deal of expansion on others on the periphery, and even a religious connection among certain events which also has nothing to do with the book/s. What’s been expanded then is all that which we “ought” not have any reason to further visit, so how is anyone meant to proceed? For all that the new twist on a despotic ruler, having to come to terms with himself in various respects, is rather fascinating and played out nicely by Lee Pace and Terrence Mann (as the older two Emperors), the throne and governing system is covered as much as need be simply by calling it “Galactic Empire,” and Asimov knew this well.

Those among the uninitiated are perhaps in for a shock, while fans are perhaps in store for further, and more bizarre, deviations which may well ultimately look nothing at all like the original story. Already something like “based on” is beginning to feel like the vacuous claim attached to horror films.

Trying to give the series the unbiased fair shake, it’s potentially one of the most interesting and addictive shows in years, but that’s an attempt to leave aside knowing its future… hopefully. The extended look at the Emperors goes further than actually serves any purpose, but the political drama is a solid hook that pits an unstoppable force of bureaucracy and military might against a mathematician with nothing but a few calculations and no way to convince anyone. Adding the quasi-religion into the mix is a compelling effort, giving the military and economic woes of such a government something else to worry about, but it is hard to see what can come of it (and nothing should).

It all makes a frustrating sort of sense, naturally. Who wants a series/movie that’s the equivalent of a book (and a short one) that changes time periods and all its characters four times while nothing really happens? We’ll see, I suppose, or maybe we won’t, but it does make one wonder if it all performs like psychohistory and can’t be made to work out if you know what comes next.

Where to watch Foundation