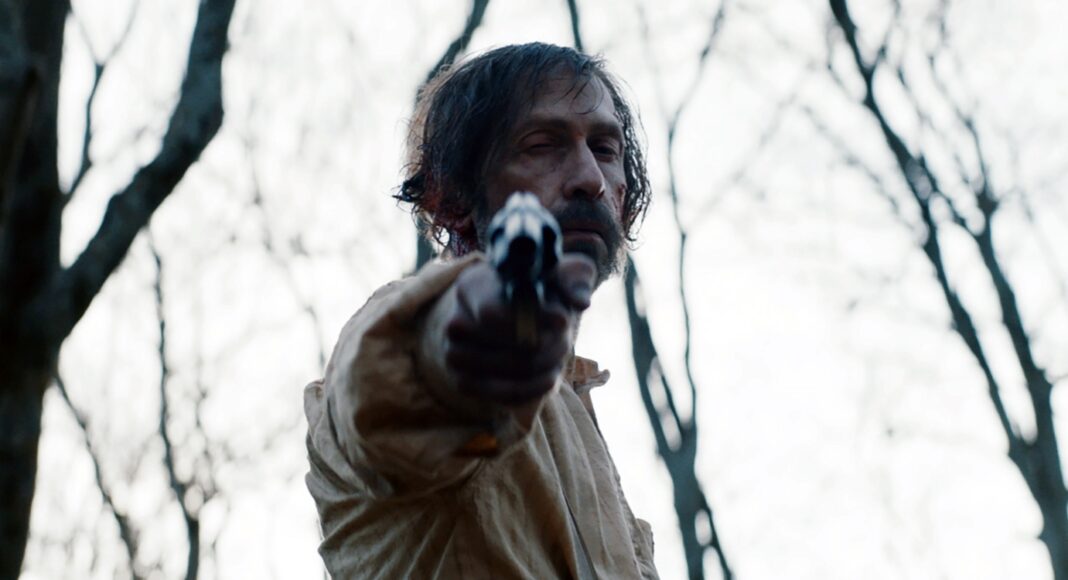 The western is a genre struggling against hope and though a few are still released every year, and one of sufficient backing makes a splash every so often, it is a well too frequently visited without real purpose. Indeed, the genre’s slow march to obscurity is all that certain “western for western’s sake” efforts need to find audience enough, and whether or not there is any work the genre can still do is irrelevant.

Old Henry, on the other hand, at least has a theory. Henry (Tim Blake Nelson) is a farmer and widow raising his son Wyatt (Gavin Lewis). The film opens by perhaps overselling Wyatt’s desire to abandon his existence of chores and isolation, and though it clumsily sets the stage, it makes up for it as Wyatt consistently butts heads with his father in crisis situations later. Westerns may need some action and gunplay, but Old Henry makes great use of “we are who we are stressed.”

The monotony is broken by the arrival of Curry (Scott Haze), a man shot and unconscious who has a bag full of money. The immediate reaction to Henry’s nearly abandoning Curry may be to see it as rather gimmicky, but it plays well in retrospect. Before Henry really has a chance to handle one arrival, Sheriff Ketchum (Stephen Dorff) shows up looking for Curry, but Henry is suspicious of everyone.

The backdrop of a standoff and holding out against all odds is as western cliche as something might be, but Henry has some secrets and a past he’d like to stay buried, which is of course also as genre standard as things come. Here, it isn’t simply that we are about these things for new reasons, but because we can perhaps do something with them.

In a vehicle that is, whatever else might hope to slip in, largely focused on the action of a situation, Tim Blake Nelson delivers a character far beyond what might be considered the legitimate hopes of the page. He’s a man broken and driven, and Old Henry is a film daring enough not to say so, but instead simply have him interact. He’s a man of a certain sort, with a variety of lives behind him, and he can no longer recognize himself in many of those lives… and we know that long before the movie gives us any information about him.

It becomes a film nearly drenched in mood almost by virtue of distancing itself from any attempt at atmosphere or affectation. Henry carries it all along with him, needs no help, and stands out all the more for the lack of cheap theatrics (like the overuse of filters, and dance of shadowplay) so common to the genre. Henry may be in a spot, but he’s not only torn and tortured, he’s mostly scabbed over, and fills every room without effort or desire. Where we might try to establish a scene with certain lighting or maneuvering positions just so, Nelson simply hangs his head or barks a command with no mind to anything but being exactly who this character is.

The last 20 minutes are a bit sloppy actually, and Lewis is serviceable but unable to keep pace with Nelson’s abilities, but the rumination on aging, remorse, and regeneration isn’t overly hurt by any of it. Dorff might have had the opportunity to deliver a somewhat more cunning black hat, which could have opened the door for better, and deeper dialog, but that too is largely forgivable.

What stands out is the mix of “any old yarn” that keeps you listening with the pseudo-introspection that is only accidentally of any genre. That sort of gripping excuse for the examination of the unique(ish) – as in Unforgiven or The Jack Bull – is work westerns can still do, and Old Henry offers that up in spades.

Where to watch Old Henry

The Horn is going to be like nothing you've ever seen before, riding along with the most amazing team of air rescuers around.
Read more