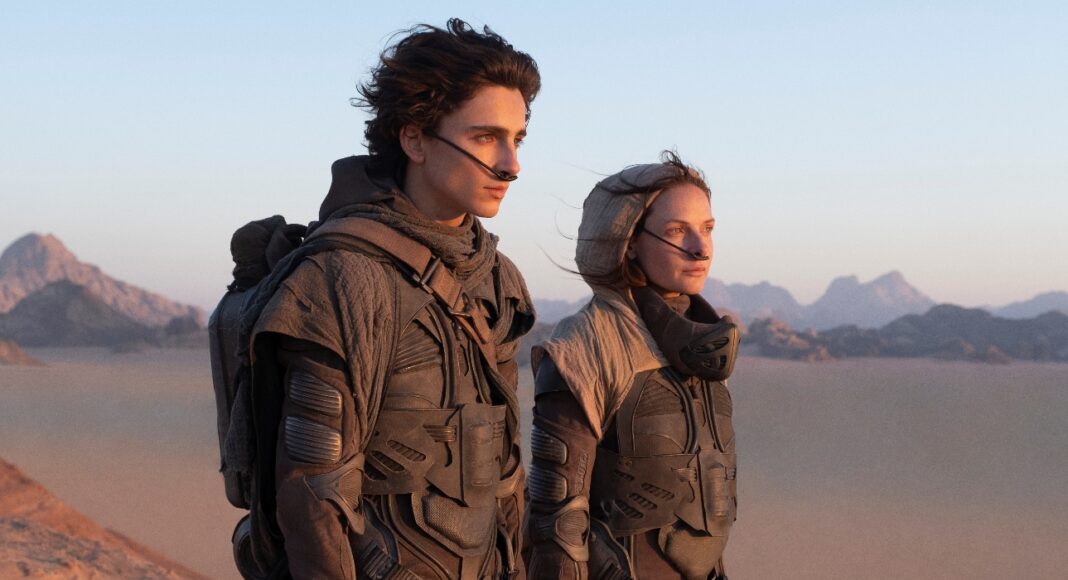 With the release of Dune, audiences now have two efforts adapting giants of the sci-fi genre, and the theories behind these adaptations could not be on further ends of a “faithfulness” spectrum. The Apple+ series Foundation generally believes that Isaac Asimov had a somewhat passable idea for a story, but an adaptation needs around 75% of everything to be not only new, but even directly counter to the original work/s. Dune, on the other hand, though it has a couple of establishing interactions that don’t come from the book, is only “unfaithful” in the sense that it would need to be ten times as long to include absolutely everything.

The ins and outs of the film’s digressions are really neither here nor there, and whether a line is delivered by another character or something is presented as a flashback vs. real-time, it all lives in a realm where even calling it out as not exactly what happens in the book is to nitpick to an odd degree.

The only question is whether or not it delivers, and when you’re dealing with what is one of the densest works around, and one that is perhaps fooling itself with its own ability to make some statement or other on virtually every facet of human existence, delivering is a tough order. The answer is that it does, but there is a pretty serious caveat. When David Lynch released his version of the film, despite the issuing of a glossary to accompany your movie ticket, it was no secret that you simply had to have read the book to get much out of it. Here, it seems the idea is to avoid the requirement, but it doesn’t really escape it. Will audiences of the uninitiated get something from the film? Absolutely. An evocative, engrossing, powerful film at the very least, with much in the way of the book’s themes and political viewpoints, but they won’t get the same thing. I think, not by a long shot.

Many of the subtleties and deeper layers don’t get the attention fans may hope for – you’d never know when someone is supposed to be scared in certain situations, who/what the Bene Gesserit are becomes a matter of very broad strokes that might lead you in different directions – but the general purpose comes through almost magically. The sense of place itself, while perhaps overwrought actually, stands out as a treatment that can hardly be touched, even where this involves what seems commonplace. Cinematographer Grieg Fraser has proven himself a kind of “localesmith” with efforts like Bright Star and Zero Dark Thirty (and many more), and he creates a brutality of emptiness, whether in the desert or a palace, that is arguably the most difficult translation in play.

Likewise, while Timothée Chalamet has proven himself over his relatively short career, it’s a Herculean and unique task to land the coming-of-age Messiah role, and it’s hard to imagine hoping for a better display of being clueless, competent, well-trained and inexperienced, all while being torn apart from the inside out.

The full breadth of that tearing apart is one of the film’s few stumbling blocks, because it dedicates more to Paul’s visions than is really necessary for either information or entertainment. Its other real negative is in the opposite direction as the Harkonnens could really get more of a fair shake. Suppose, for example, we stared dreamily at Chani (Zendaya) for only two minutes instead of ten, that would be eight minutes of time on screen that Dave Bautista and Stellan Skarsgård could have made something out of their characters beyond simply twirling their mustaches. They both turn in solid performances, but they might have had the chance to do more than “eat disgustingly.”

Those things aside, it’s a gorgeous and gripping sci-fi-ride through political intrigue that tries its best to meet expectations for everything from personal shields and the blade-fighting they make necessary, to ornithopters and stillsuits. It even tries like hell to lay out the political map, largely by repeating certain things a few times, but the result is only, sadly, that we mostly know where we are. Other elements that complete the world are often simply described. Spice is important because someone said so, and is used in space travel, but this is explained in the film exactly as much as it is here. As I mentioned, the Bene Gesserit, where they are explained, are given mostly the attention of thumbing through their humble literature as opposed to delivering a real feel for their place in the structure of things.

These are among the best of all possible criticisms though, given to a project that is probably impossible. If the film were a lesser effort, it wouldn’t deserve a further expectation of the deeper subtleties. If the things that did work, and oh so well, didn’t capture the magnitude of a galaxy-harming collapse of form, expose a culture no one understands, spell out (at least) the designs involved in religion-creation, and all while establishing a burden no one could be prepared for, a longing for more of the minutiae would never rear its ugly head.

Still, it wants the book. You don’t know who Sardaukar are, except that people are scared of them, and the film eschews any explanation of Mentats at all. It seems as though audiences are in a better position than with Lynch’s version, but that’s a tough call to make. The grandiosity comes through far better, as does the gravity, but without the second part it’s hard to say that we will ever make it to a more complete sense of the overall structure that truly manages what the book is ultimately trying to convey.

Catch Our Podcast Review Below!