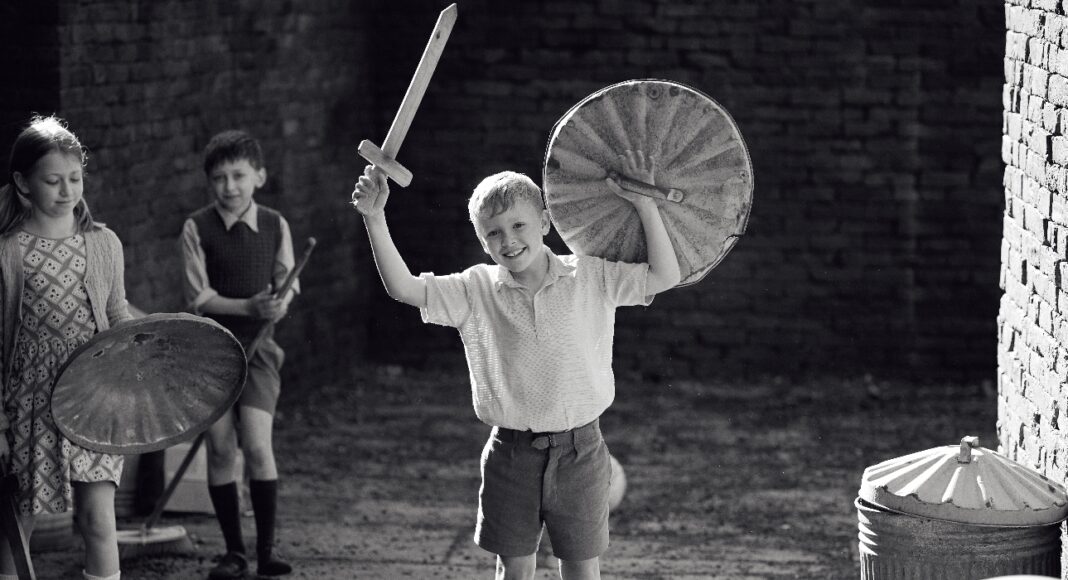 There are some films that have to be nearly perfect to be any good at all, and Kenneth Branagh has found himself on the wrong side of that fact a few times. Oddly, previous efforts have gone wrong because he seems overly close to them and they become, at best, rather pretentious. That’s odd because Belfast manages to avoid any such difficulty and it is literally about him.

It’s the late ’60s in Belfast, and Buddy (Jude Hill) is nine and busy chasing other kids around with a wooden sword, mostly oblivious to the true depths of the problems facing the adults in his world, until he isn’t. Ma (Caitriona Balfe) loves her home and family, to the extent that the idea of moving confuses her as a misapplication of terms. Pa (Jamie Dornan) spends most of his time in England, because that’s the only place to find work, but he’s largely home at the weekends. Granny (Judi Dench) and Pop (Ciarán Hinds) are also around, adding heart and a certain kooky whimsy to the analysis of life’s events.

The problem with these “love letter to my own past” films (Branagh being, of course, Buddy) is that they rarely figure out a proper perspective and try actually to tell a story of events, and even characters, instead of simply relaying reactions. Who doesn’t know the story of what’s going to happen to these people already anyway? Somewhat surprisingly, Branagh is perfectly distanced when it works, and perfectly every part of what’s on the screen when that’s what the film needs. It’s ultimately a movie of sighs and extended looks, brilliantly into, through, and beyond people, and it never cheapens itself by telling you where you’re supposed to be.

Still, for all that the movie provides a depth by way of its family simply existing at each other, it does so while skimming through an intensity of chaos that may well be hard to believe for the uninitiated. As the sidewalk comes up, and cars and bookcases pile up at the end of the street, Buddy’s family struggles for some normalcy among the Molotov cocktails and barricades. The action may at times reflect a certain madness, but the film’s treatment somehow renders it a slightly less dangerous danger than conveys a sense of accuracy. That may well come through differently for some audiences, but it felt intentional, as Ma drags Buddy through a riot to a store (and really, for no good reason), because as near to dying by a random, flying brick as one may be, it probably just seems loud and blurry if you’re nine. After all, Ma is making me be here.

Whatever its abilities, and however it may entertain, the question of really delivering something remains. Pop and Buddy may make you chuckle (and no one delivers better than Hinds here), and Ma and Pa’s “fights” will tear you apart as they struggle mostly against struggling. Through it all though, the things we know are just bound to happen, and those that prove cliches become such for a reason, there’s a kind of self-inflicted trauma of those who leave. Who have to leave. We meet Ma and Pa so they can relay a kind of “every-complaint,” and deal with it all naturally, perhaps humanly. Eventually, we will get one of the best scenes ever filmed, which finds Ma and Pa, devastatingly, simply looking at each other. We meet Buddy so he can skew the look and feel of things as nine meets ninety, and charming naivete can shake its fist at things. We meet Granny and Pop so their quirky personality can be revealed as world-… well, ease, if not weariness. But, we met them all for the leaving that, for some, as the movie keeps telling us, is just Irish.