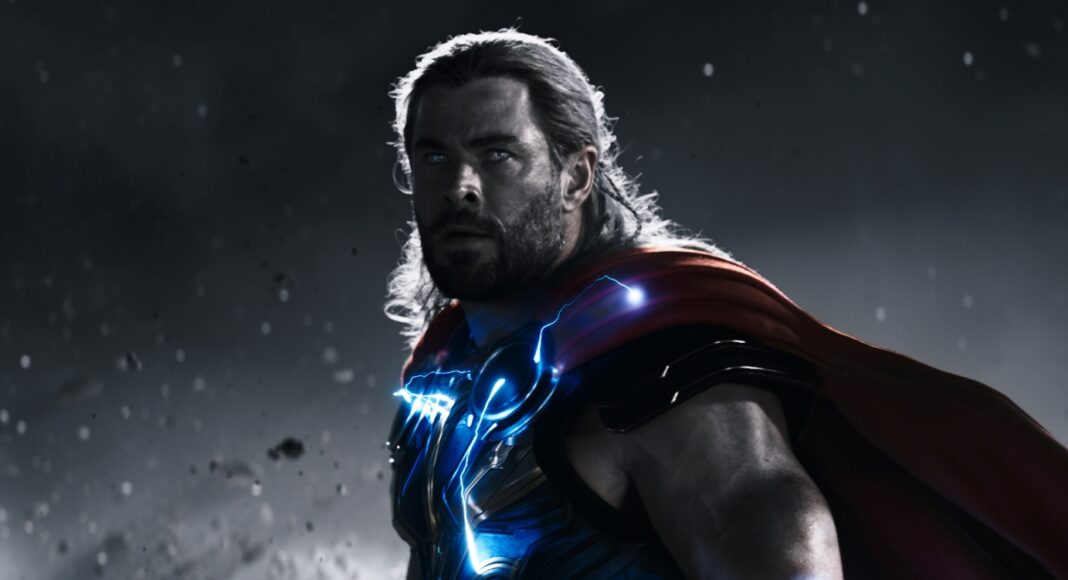 Just as Marvel lays out its Phase 5 slate at SDCC, Thor: Love and Thunder is vying for your dollars in theaters and while many of those Phase 5 films look like true winners, it may well be the extent to which Marvel can distance itself from Phase 4 that determines whether or not the MCU can keep dominating the box office. While the TV portion of the latest phase has been mostly brilliant, the film side of things has few standouts, and Eternals and the latest Doctor Strange moved into the laboriously silly. As Thor gets yet another film (as does Taika Waititi), we’ve shifted from making comic book movies to making Saturday-morning cartoon movies. In fact, this Thor goes so far (especially at the beginning and end) that praising this while disparaging Masters of the Universe becomes a confused, and incredibly difficult to support position.

The film opens with what seems to be the pages used to trick Christian Bale into signing on as we are introduced to his character Gorr, who stumbles into his God as his own society is decimated. Having just had his daughter die in his arms, Gorr doesn’t take kindly to the dismissive attitude of his God, and since a legendary (sentient?) God-killing sword happens to be laying close to hand, we’re off to the races.

While you might think that this dark, though oddly beautiful, introduction might actually connect to the film you’re about to watch, nothing could be further from the truth. It may spoil things somewhat, but Gorr’s is a story that is something of an allegory for transitioning from religions focusing on pantheons made up of “relatable” and varied superhumans to those that admit only of the one, mysterious vaguery. The “killing of Gods” here leads to an appeal to… some sort of force anyway, and one with limitless power.

Thor: Love and Thunder wants as little to do with this story as it can manage though and the second part of the introduction lays out the actual introduction for what you can expect. Thor walks us through the theme park that has sprung up as his fellow Asgardians have moved to Earth, which opens the door for a variety of ridiculous, and frankly, sad, cameos. This side of the film mostly features Jane Foster (Natalie Portman) fighting cancer, Thor struggling with his relationships with his weapons, and as many ’80s sit-com gags as we can squeeze in.

As Gorr, and his film, close in on Thor, and his, massive battles with shadow monsters ensue, during which there is obviously plenty of time to chat, become uncomfortable, and lose all the Asgardian children so that Gorr can lure Thor to the shadowrealm. Gorr, who can apparently simply appear anywhere in the universe he wants, needs Thor in the shadowrealm despite really being no more or less powerful there, but there’s a black-and-white “Little Prince” scene we really wanted to shoot. This all leads to a race to get to a place no one has ever been before, with Gorr simply and inexplicably, suddenly being there. Well, I mean that’s what it says in the script so that’s what we’re shooting.

There are a flurry of sub-plots hoping to get attention and the one involving the children is the one that proves most worthy, given that the film wants only to distract you from its actual plot. Unfortunately, our pop-ins to the kids aren’t what they could be, and like most everything in the film, have nothing behind them to earn what they’re hoping for. The end of the arc is a decent bit of fun, but it’s also fairly silly and fits miles better in the non-existent Children of Asgard animated Disney+ series than it does here. Which is really the ultimate problem with this, and a lot of what Taika Waititi has done recently – it’s trying to be everything.

The film ping-pongs from tortured struggle with the idea of losing Jane to cancer, to bizarre monster battles, to lazy rom-com patter, to “comedy” that mostly relies on such ideas as simply the fact that Zeus is a foppish, effeminate buffoon. It’s a film enamored with ’80s sensibilities of every kind, irritated at having to relay its own plot, and shackled with the MCU’s lack of coherent explanation of “Gods” and their abilities. It works, when it does, in certain scenes that are undeniably fun and can be appreciated, at least momentarily, as episodes disconnected from the whole. There are a few laughs, but the characters can’t get anywhere really, because the movie doesn’t want them to. Worst of all, it’s mostly boring.

Where to watch Thor: Love and Thunder