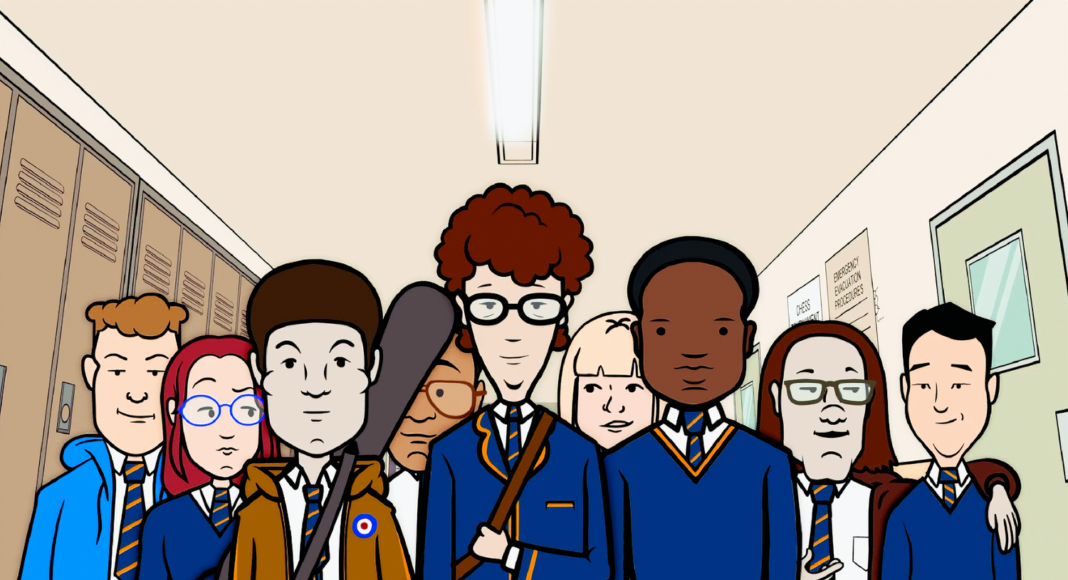 I have to confess that documentaries aren’t my favorite genre of film, despite the fact that documentaries manage to be some of my overall favorites. Generally, the ones made by people too close to, or in fact part of, the subject have the least chance of winning me over. At best they tend to be stylistically odd, and mostly they misunderstand what’s actually interesting about the story.

Thus, My Old School has everything going against it. It’s made by Jono McLeod, who has a few other documentaries under his belt, so at least this isn’t his only reason for becoming a documentarian, and he is indeed very close to the story. It’s also a rather simple mix of animated “recreations” and interview footage, with a hint of archival footage. Topping things off, Alan Cumming stands in as the subject for interview clips in which he lip syncs to interview audio. It’s as straightforward, potentially boring, and perhaps distancing a way to tell a story as you could imagine.

But somehow, it’s absolutely mesmerizing, and it isn’t just the fact that this is the craziest story you’ve ever heard.

Perhaps the most compelling part of the delivery here is that classmates and faculty revisit the “Brandon Lee” story they lived through while piecing together information they didn’t know and, in some cases at least, coming to terms with their own memories. The interview subjects we’ll see are remembering parts of the most fantastic events they will ever live through, but they were 16 (give or take) at the time, and their continuing journey with this story is as much a part of the film as anything.

Meanwhile, perhaps the most shocking thing about the story is that while Brandon Lee is clearly out to get away with something, it doesn’t fall apart until after he’s already gotten away with it. Lee, you see, has already been to Bearsden Academy, decades earlier, but has decided to start over and go through school again. In something of a twist, it’s a scheme that his classmates all thought they were on to from the beginning, as the film opens with them remembering that they assumed he was perhaps a student teacher when he showed up. Before long everyone let it go though, and he was just the kid who looked a bit old. As they say themselves, “Why?” It’s easy to dismiss the idea that he must be an older person, because you can’t wrap your head around a motivation. Who would just enroll in school and go to classes all day… for a year?

As I said, that isn’t even the beginning of how weird this story gets, or what a unique character “Brandon Lee” is, and Alan Cumming will never get the credit he deserves for the stunning delivery he gives here. Often with almost nothing to work with, he nevertheless gives us a character so bizarrely rich and detailed you might have gone to school with him yourself. As the film approaches its conclusion we get some archival footage of the real man, and you think, “Yep. That’s him.” It reminds of Ian McKellan in Mr. Holmes, who often had to get you to understand things just by staring past the camera oozing emotion.

I suspect this is a documentary that will prove easy to overlook and underrate. It is somehow a bit “soft.” The interviews are cheery, even as the pennies continue to drop and the subjects put things together in new ways. We aren’t “after” Brandon in a way that might prove more gripping to some. But, while our subject character is certainly bewildering and fascinating, the film works best when it looks at “Brandon Lee” as simply an inexplicable event that happened to all these other people. Finding out what makes the storm tick is certainly of some value, but the real story is how living through it changed people.

We didn’t cover it as much as I’d have liked in our podcast, and we will make up for that in future, but we did cover it below.

Just as a note, another fascinating aspect of this story is the number of people involved who have pretty impressive acting CVs.