FOX is taking a shot at what seems to be part of the old school renewal genre largely capitalized on by TV Land. Grandfathered, a new fall show starring John Stamos, has all the hallmarks of a show looking to revitalize the general sensibilities of a bygone era of television sit-coms.

With apparently much in common with any of the original efforts on TV Land, and similar vehicles elsewhere (Last Man Standing), the show seems to be after a lighter brand of comedy with a lot of theoretically heartwarming moments.

Stamos plays an over-the-top, aging bachelor who owns a restaurant, and is focused on his business and his free lifestyle. His world is turned upside-down when he learns he not only has a son he never knew about, but he’s suddenly a grandfather as well.

There’s a fair amount of potential, but this brand of comedy could easily go wrong, and it’s the kind of show that people probably have to take to immediately, or they aren’t ever going to. buy finasteride online https://cpff.ca/wp-content/languages/new/mg/finasteride.html no prescription 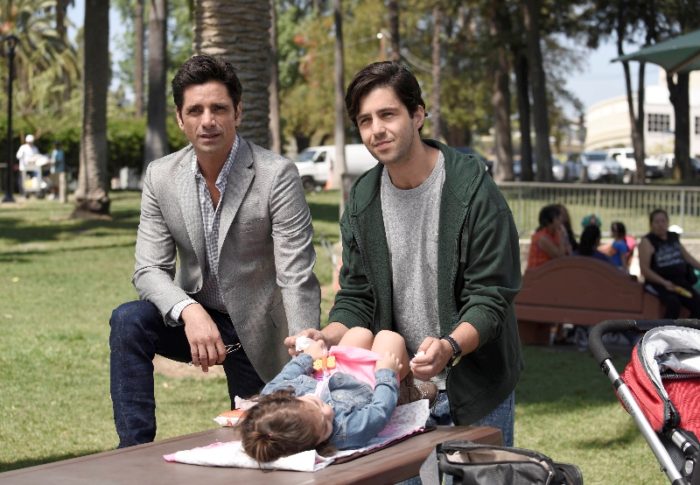 What’s the fastest way to put the brakes on a cruise-controlled bachelor lifestyle? Fatherhood? Guess again. Television icon John Stamos (“Full House,” “ER”) stars in a new comedy about the ultimate bachelor who discovers he’s not only a father, but a grandfather. Successful restaurateur and man-about-town JIMMY MARTINO (Stamos) is used to being the most suave, most handsome and most single person in the room.

All that changes with the surprise appearance of Jimmy’s adult son, GERALD (Josh Peck, THE MINDY PROJECT), and his baby daughter, EDIE. Now Jimmy has to unlearn a lifetime of blissful selfishness and grapple with the fact that he went straight from single to grandfather in six seconds flat. Keeping tabs on Jimmy is Gerald’s mother and Jimmy’s former girlfriend, rocker chick-turned-mother SARA (Paget Brewster, “Criminal Minds,” “Community”).
buy nolvadex online https://cpff.ca/wp-content/languages/new/mg/nolvadex.html no prescription

Equally concerned about how Jimmy will manage these new developments is Jimmy’s restaurant family, especially assistant manager ANNELISE (Kelly Jenrette, “Audrey”) and chef KEN (Ravi Patel, “Super Fun Night”). Can Jimmy teach Gerald to be a little more like him in order to win the affection of Edie’s hot mess of a mom, VANESSA (Christina Milian, FAMILY GUY, “Baggage Claim”)? Will Jimmy and Sara fall for each other all over again, even though she’s the one thing he never dates – a woman his own age? And who’s higher maintenance, Jimmy or the baby? GRANDFATHERED is an unconventional, sophisticated comedy about coming of age – at any age.
buy cytotec online https://cpff.ca/wp-content/languages/new/mg/cytotec.html no prescription