Food Network Star has managed a place in the upper tier of reality competition programs, but it is somewhat unique insofar as it doesn’t really seem to have any legitimate record when it comes to meeting its alleged goal. It certainly rocketed out of the gates, and has had some notable winners, but after 11 seasons, and several shifts in format (like who chooses the winner), Food Network Star certainly draws its own audience, but it doesn’t exactly find stars… or at least, Stars.

Quick, name the last three winners and the shows they were given on the network. Good luck.

Quite honestly, the main flaw seems to be in letting people progress deeper and deeper into the competition without any idea what their show is going to be. Sure, they’re cooking, and they are, for the most part, doing pretty well with their screen challenges, but then it gets down to three or four people who seem to be largely just pulling something out of thin air. Who is supposed to tune in for that?

At any rate, this is just the sort of next-day babbling that you are about to get into yet again, because the show is fast approaching.

This time, there are some new twists to things, including both Food Network Star: Comeback Kitchen, and webseries, Star Salvation. 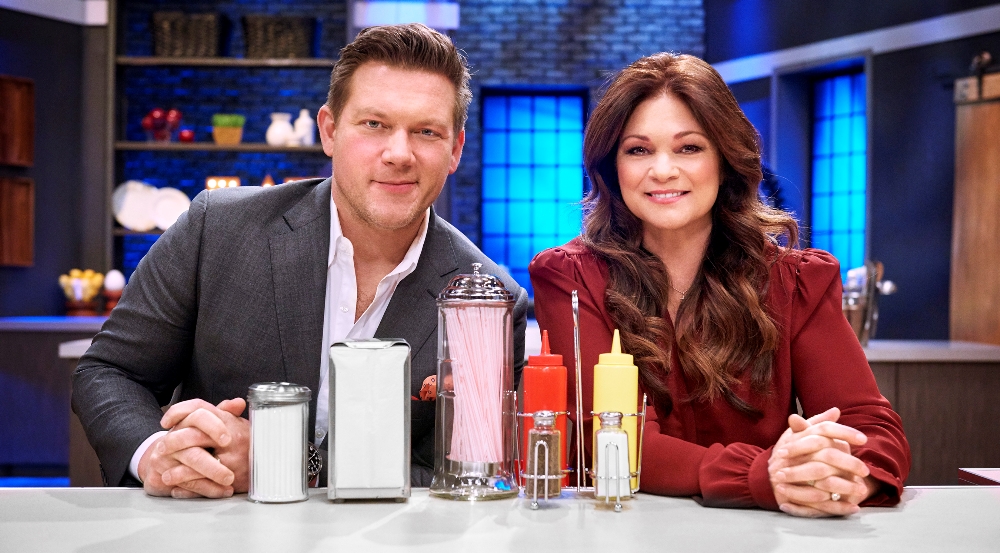 Web-series Star Salvation, hosted by Alex Guarnaschelli and last season’s Food Network Star winner Eddie Jackson, returns again to give one eliminated finalist the opportunity to rejoin the competition during the season. The Food Network Star season twelve winner will be crowned on Sunday, July 31st at 9pm ET/PT.

Get the full scoop below, and pick your favorites to root for now. Honestly though, there’s at least four of these people that you don’t have any interest in. Probably.

Season Premiere on Sunday, May 22nd at 9pm ET/PTwith Giada De Laurentiis and Bobby Flay Back as Mentors/Judges

Thirteen talented culinary hopefuls are put through the ringer this season, battling it out in challen ges that not only test their kitchen skills but also their on-camera chops, to find out who has the talent and charisma to follow in Giada and Bobby’s footsteps and win the ultimate prize: their own Food Network show.

Web-series Star Salvation, hosted by Alex Guarnaschelli and last season’s Food Network Star winner Eddie Jackson, returns again to give one eliminated finalist the opportunity to rejoin the competition during the season. The Food Network Star season twelve winner will be crowned on Sunday, July 31st at 9pm ET/PT.

Starting May 8th on Food Network Star: Comeback Kitchen, seven unforgettable former finalists enter the Star kitchen for another shot at stardom. When co-hosts Valerie Bertinelli and Tyler Florence introduce the first challenge, the competitors are forced to face their pasts by attempting to redeem the dish that was the downfall in their respective season. The alumni must then shoot a one minute “Where Are They Now?” video, updating viewers on what they’ve been up to and how they’ve improved since their Food Network Star appearance. Through three episodes, Valerie and Tyler determine who has earned a spot on the new season of Food Network Star.

In the May 22nd season premiere of Food Network Star, the finalists must shoot a 30-second screen test to give viewers a quick culinary preview of what they are all about. The videos debut during a VIP event at a luxury theater in Los Angeles in front of an audience; but when Bobby and Giada surprise the finalists with news that the Food Network Star: Comeback Kitchen winner will also join the competition, how will they handle this twist?

Comeback Kitchen hosts Valerie Bertinelli and Tyler Florence help Giada and Bobby decide who will be the first to be sent home . During the season the finalists encounter challenges that not only test their culinary skills, but also their on-camera presence, from trying their hand at delivering food reports for Entertainment Tonight co-hosts Nancy O’Dell and Kevin Frazier, to shooting a promo for their own show, the finalists are challenged to not only create great food but great TV.
Throughout the season, Bobby and Giada are joined by special guests who help determine who has what it takes to be the next face of Food Network including, Anne Burrell, Food Network Magazine Editor-in-Chief Maile Carpenter, Hayl ie Duff, Jesse Tyler Ferguson, Guy Fieri, Duff Goldman, Hannah Hart, Robert Irvine, Ali Larter, Katie Lee, Tia Mowry, Lorraine Pascale, Rev Run, Aarti Sequeira, Donal Skehan, Trisha Yearwood and Internet stars Rhett & Link. 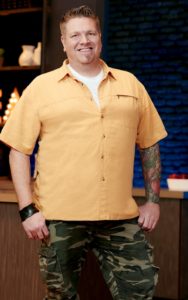 Rob started out washing dishes 25 years ago and hasn’t looked back since. His culinary resume is quite extensive and includes being the executive chef/owner of his own catering and private chef company in New York City.

Rob would like to teach viewers how to use and combine meal leftovers to make delicious dishes. 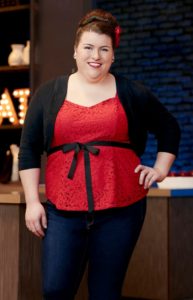 As a child Erin was introduced to a vast array of food types during childhood but eventually realized that sweets were her calling, learning how to decorate cakes in her grandmother’s kitchen.
After graduating from pastry school and working at a variety of bakeries, this California girl moved to snowy Minnesota in order to run her bakery’s flagship store. While she loves sweets, she also cooks flavorful comfort food, which she describes as “grandma food kicked up a notch.” 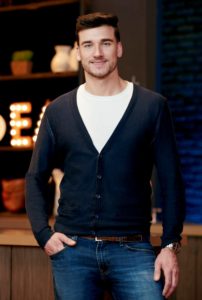 Growing up in the Tuscan city of Lucca in Italy, Damiano spent most of his childhood in the kitchen cooking alongside his brother. The two brothers always dreamed of opening their own business together, and they left the Italian countryside for California in 2009 to follow their dreams of opening an authentic Italian pasticceria.

Sticking to his roots with traditional Italian recipes, Damiano wants to share his vast knowledge of Italian cooking with a wide audience. 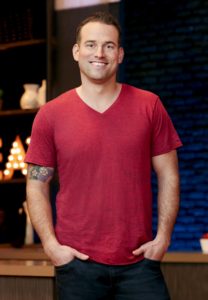 Aaron grew up in a small town and spent a lot of time working on his grandparents’ farm, learning to cook at the age of five when he would make meals for his family.

Since graduating culinary school, he’s had a successful career in Chicago working in restaurants and now finds himself in Spokane, Washington, running his own catering company. Aaron’s determined to go after what he wants and he wants to be on Food Network! 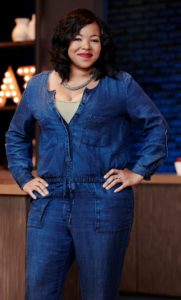 A seasoned chef who likes to twist old-fashioned recipes with her own unique flair, Tregaye has a passion for the untraditional. She learned the basics at Le Cordon Bleu, but she soon realized that her love for cooking came from her youthful soul and love for fusion cuisine.

As a successful, self-employed mother who relates best to a younger generation, Tregaye’s dream is to have a culinary talk show. 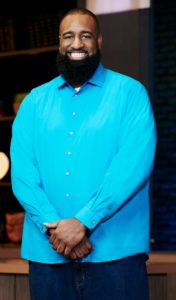 Standing at 6’9”, it was pretty much guaranteed that Yaku would have the basketball world’s attention from an early age. But even while playing professionally in Europe, he couldn’t shake the fact that nothing made him as happy as cooking did.

Born in Inkster, Michigan, Yaku learned the art of the hustle, selling chicken dinners out of his dorm room in college to make money. Yaku’s food philosophy draws from his Southern and Caribbean heritage, and specializes in Latin American, stick-to-your-ribs, shareable comfort food. 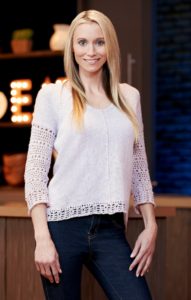 Melissa trained her whole life to play basketball and when an injury ended her career, she turned to cooking for inspiration. Melissa now takes the everyday foods we love and recreates them in a healthy and delicious way.

Melissa moved from Ohio to Los Angeles to pursue her culinary dream and would love to combine her passion for food and sports on her own Food Network show. 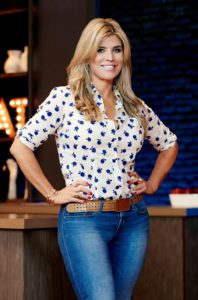 Ana Quincoces, 49 (Coral Gables, FL) – A former lawyer of 20 years, Ana’s dream is to win her own Food Network show and is confident that she is the one thing Food Network is missing.

Ana is passionate about showing viewers how to spice up their dishes with Cuban flair; Ana has written Cuban cookbooks and currently produces her own Latin-inspired food line. 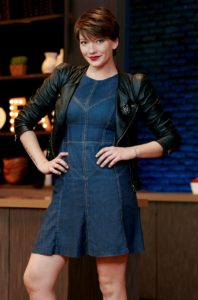 Having deprived herself of culinary indulgences for so many years as a model, Monterey decided enough was enough and finally gave in to her one true love: food. Holding onto skills and confidence gained through trial and error as a chef and caterer, Monterey knows that food isn’t something to be scared of – it’s meant to be celebrated.

Inspired by her unrelenting culinary wanderlust and her jet-setting past, Monterey has discovered that her best dishes are made from the adventures and flavors she’s experienced on her travels. 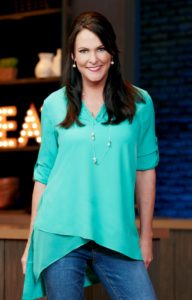 Between owning a restaurant and bakery and wrangling her five children, Joy has a lot going on. Drawing inspiration from her childhood, Joy manages to maintain a self-deprecating wit through all the chaos, creating upscale Southern food that looks good but also satisfies, such as fried green tomatoes and chicken and waffles.

Joy is ready to teach accessible Southern cooking without any of the stuffiness. 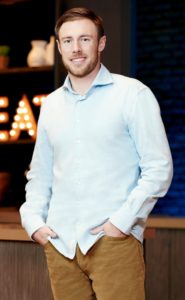 Havird took over his family business, running one of Augusta’s most popular restaurants since the ‘40s. Havird grew up learning how to cook in the family restaurant and received a formal culinary degree from Helm’s College, where he graduated first in his class.

With a focus on modern Southern cuisine, Havird creates fresh, modern dishes from staples such as fried chicken and shrimp and grits. Ultra-competitive, he won’t hold back when it comes to going after what he wants. 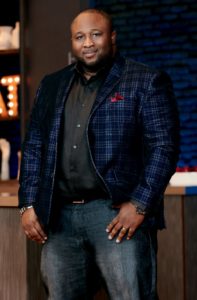 With a wife of 16 years and nine children, Jernard has deemed himself “The Chef of Love.” He believes food and love go hand in hand and wants everyone to know how easy cooking can be, and how much excitement it can add to your life.

As an Executive Chef, Jernard has traveled all over the world, including cooking for Tyler Perry, and has even published three cookbooks. Currently the General Manager of a tavern in Georgia, Jernard loves to infuse any dish with his Southern flavors and a Cajun twist.