“Inspired by true events,” can mean a lot of different things in the movie game, and in the case of Colonia, it seems to be working almost a horror-film spin on the idea. There is a country called Chile. 1973 saw a military coup there, and a place called Colonia Dignidad was a cult compound run by ex-Nazi Paul Schäfer, which served as a torture station for Pinochet’s secret police. After that we diverge from reality, though in a somewhat interesting way.

The setting is real, but the plot is something else.

Lena (Emma Watson) is a stewardess for Lufthansa, and her lover Daniel (Daniel Brühl) has fallen under the spell of pre-coup Chile, and those who struggle against the country’s harsh political reality. The pair are in the wrong place at the wrong time, and Daniel is taken to Colonia Dignidad. When no one will help her, Lena decides to brave joining the cult to see if she can find a way for the two of them to get out, despite the fact that no one has ever gotten out.

The film’s problems are legion, but mostly forgivable, and watching Brühl makes up for most of them anyway. While Watson has a certain charm, Brühl is not only giving a great performance, much of it involves that old actor’s Achilles heel, playing a character who is acting.

While many of the steps along the way feel unnecessarily forced and/or contrived, most of them can legitimately be written off as the fate of indie budgets and production schedules. Sure, when Lena goes through this scene in this way, overplaying the ability to spot her later, it looks a little silly, but how many times are we going to shoot it really? That’s the kind of latitude you shouldn’t really give a film, but if indie’s are going to be able to incorporate large crowds having leaflets thrown at them, or groups of men beating the snot out of women, they can’t reset everything when the wind doesn’t blow their way, or one guy’s blow doesn’t look especially real.

That doesn’t cover things that are choices though, and much like the recent Argo, once we get moving toward the finale, our journey becomes a bizarrely implausible race, during which several additional steps are added, just so that they can go wrong.

Still, Colonia manages to get past the hurdles it creates, because what it does right manages to come through so strongly that you almost lose the movie entirely. It focuses on the characters. Before the movie gets very far, the backdrop is all but irrelevant, and this could just be any movie about any cult, and there’s something both brilliant, and borderline horrible about that. For good or ill, from the perspective of hoping to relay the historical content, it allows the characters (mostly Lena) a chance to convince you that they could be actual people in these situations. Pulling that off is monumental, considering how hard it is to get behind Lena’s dance with the devil.

As a piece that showcases a cult, and the life that exists inside the walls of the compound, Colonia does a better job than most when it comes to believably portraying the Mad King existence that feels so improbable. It also has the chance to add an interesting layer when we stop pretending about the cultist/prisoner line.

The real tragedy for the film is that it has no hope of delivering a first act that can really get you to the rest of the film. There’s too much to do, and not enough time to offer up a couple worthy of such choices. The film asks you to play along, but it has no right to expect you to, except insofar as the actors really make you want to watch them. 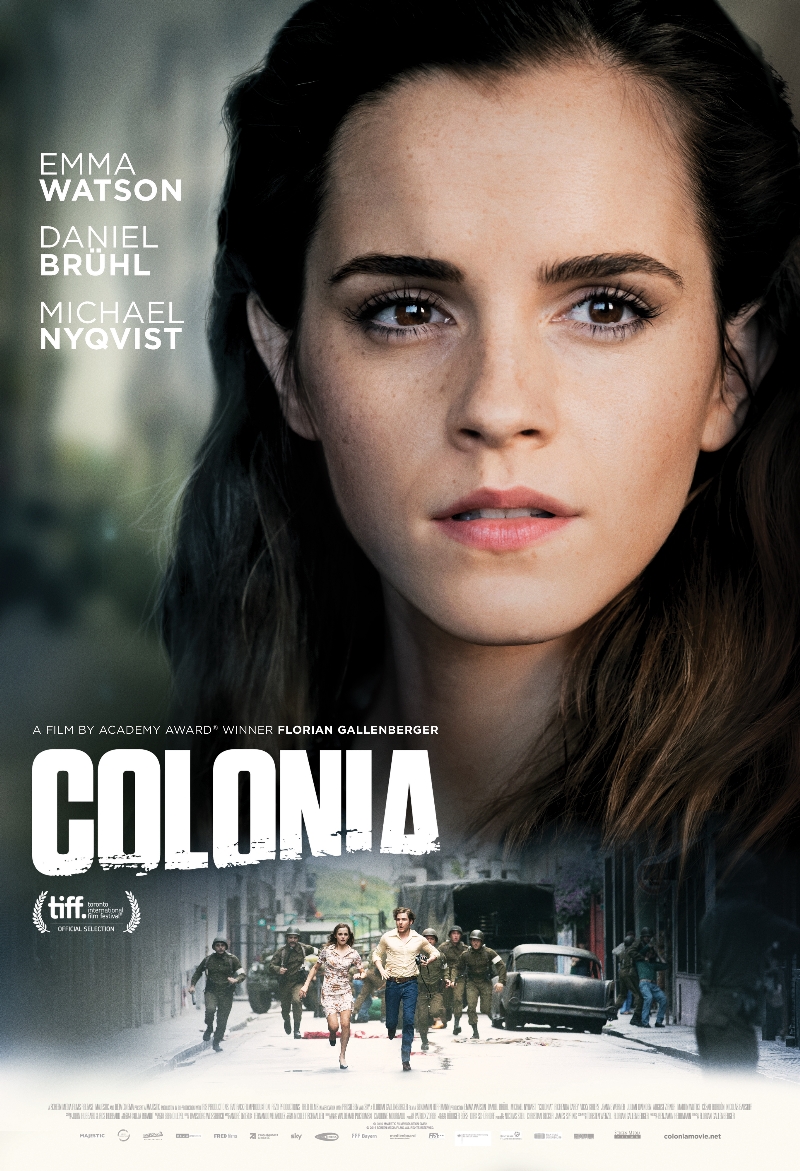 Inspired by true events, COLONIA tells the story of Lena and Daniel, a young couple, who become entangled in the Chilean military coup of 1973. When Daniel is abducted by Pinochet’s secret police, Lena tracks him to a sealed off area in the South of the country, called Colonia Dignidad. The Colonia presents itself as a charitable mission run by ex-Nazi Paul Schäfer but, in fact, is a place from which no one has ever escaped. Lena joins the cult in order to find Daniel and help him escape.