When your sequel doesn’t hit until the same year as the 20th Anniversary Blu-Ray release, you either have a great idea for exploring characters and themes that takes advantage of that delay, or you figure you can suck more money out of something people have had time to forget.

Independence Day: Resurgence is the worst sort of effort toward a grab at money, and is so far on the lazy side of the spectrum that it becomes embarrassing self-parody.

Twenty years after the events that nearly destroyed the world, we find ourselves in hot water again, as the aliens are knocking on our door again. The ships are bigger, merely to emphasize the fact that despite taking advantage of alien technology, we still have no chance of winning, the stakes are higher (well… they’re the same, I guess), and all the dramatic entanglements are powered by the countdown we’re constantly watching.

As we wander the nonsensical outline with pilot Jake Morrison (Liam Hemsworth), events conspire to connect us with the cast of the original, wherever they may be, in something that feels more like an extended “Where are they now?” featurette. Morrison, who is busy at the start of the film fitting a weapon on the moon, nearly killed Will Smith’s son in flight school, because this sets the stage for a bit of tired, taxing drama when the two are forced to “work together” later in the film. 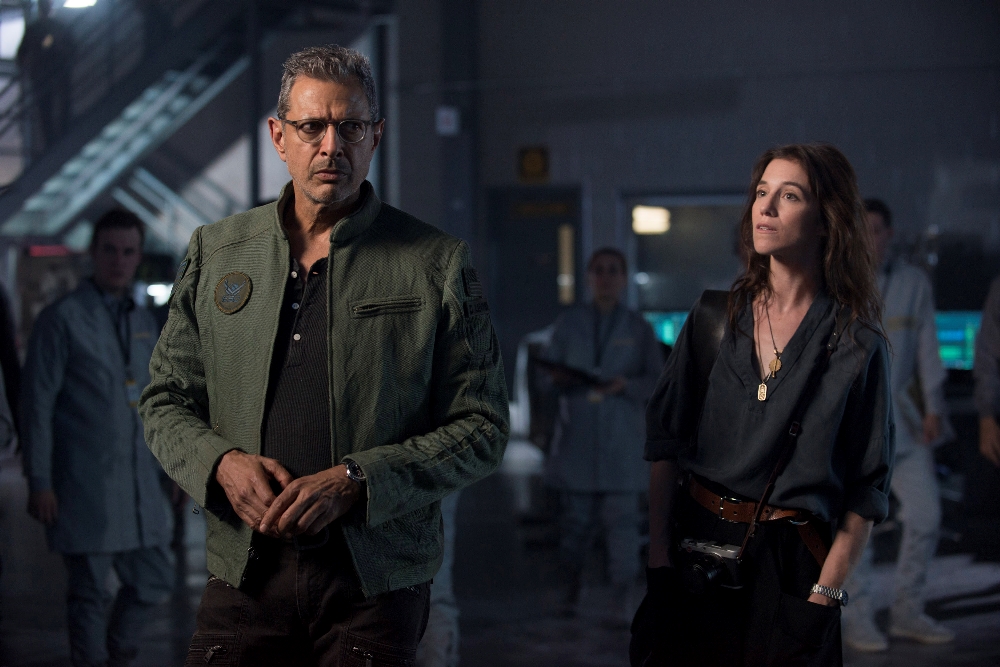 Said moon weapon is naturally installed by way of something going wrong such that Morrison can save the day in a way that is both oddly heroic (which sees him grunting mightily as he strains against the controls of his spaceship… because that’s how that works), and unquestionably counter to the commands he’s been given, so that he can be in trouble.

Oddly enough, an alien shows up at the moon, a stone’s throw away from the new weapon we just installed. At this point, General #1, Military Advisor #1, World Leader #3, and several others furiously chant that it must be destroyed immediately, and no one is all that hesitant to start shooting.

Once we have a new alien ship down on the moon, it’s time to enlist David Levinson (Jeff Goldblum) for an unauthorized trip to check it out. Levinson, by the way, has been exploring the old spaceship looking for clues. Of course, the original spaceship has gone mostly unexplored by the world’s scientific minds, because it’s in Africa where a warlord has apparently kept the world at bay on some kind of, “It landed in my backyard,” approach to world politics.

It’s rare for any film to be devoid of positive qualities, but this one comes together almost as a bad bet. The plot is outdone by B-movie, sci-fi efforts from a time when “straight-to-video” still meant something, and the film only accidentally has characters at all (I pointed a camera at someone, therefore there is a character).

I recently commented that movies could never go back to the general stylistic vision of things like Star Trek: The Motion Picture, which spent a good ten minutes doing nothing but staring at the Enterprise in dock for no other reason than that we had the effects budget to make it look cool. My theory was that if you trim out all the gawking at effects scenes, you’d only have about a 20-minute film, and you can’t do anything like that anymore.

Shows what I know.