Pixar recently announced a moratorium on sequels, and while it’s still hard to judge anything they do harshly, you can easily see their struggle. This is especially true of a company that now needs to continue the interest in things that are part of theme parks. That’s just the reality.

The news, especially with things like The Incredibles 2 already in production, may seem a little strange, but you have to respect the idea. We all love the characters Pixar has given us over the years, and there’s a lot of love for titles like Toy Story 3. But, when you think about Monsters University, or Cars 2, there’s just something different going on in your mind than when you think about Brave, Up, Wall-E, Ratatouille, or Inside Out.

Sure, the sequels they have given us still outshine most animated efforts we get, and it’s always a good time to go on further adventures with characters we know and love, but as much as we want to deny it, the magic is gone.

That’s exactly how Finding Dory plays out, and while it’s still a lot of fun, it ultimately gets bogged down in its effort to deliver something that it just can’t – the magic.

We get to see Dory’s life in a quick “flashback” that takes us from her earliest memories all the way to meeting a frantic Marlin, and as we catch up to the present, Dory suddenly remembers her parents. The play of how she initially forgets what she’s even looking for is well-managed, and sets the stage for quite the adventure, but the emotional pull rarely hits the right notes. 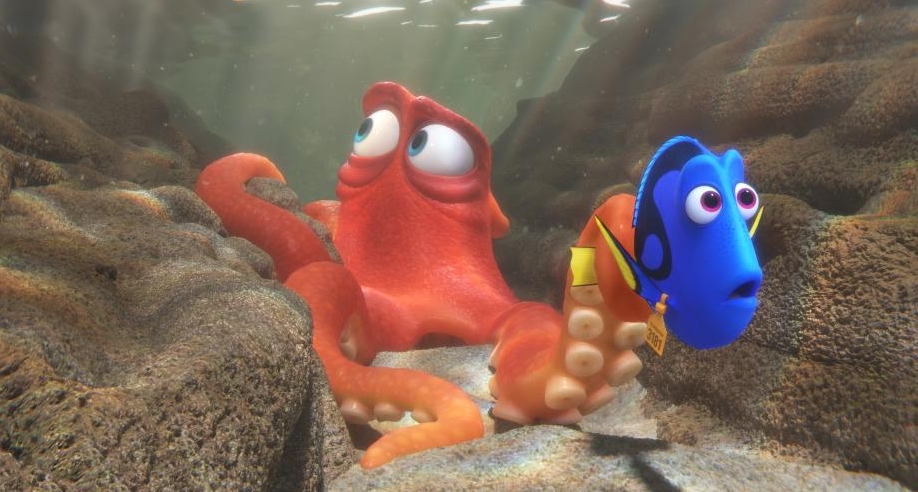 We meet new characters, and Ed O’Neill‘s Hank, the septopus who just wants to live a cozy life, steals the movie from the first moment we see him, but something about the lack of time dedicated to them, mixed with the serendipity of their necessity in reaching our goals, makes the outline of the plot far too noticeable.

While many of Pixar‘s sequel efforts have managed to at least give us the sense that we had an honest pull toward continuing a story, this one feels lazy, at least by Pixar standards, which makes it seem like more of a monetary decision than an artistic one. This shows most clearly in the film’s ending, which is a brilliantly-constructed scene that should just level audiences. Sadly, the film that led to this ending wasn’t one that could actually deliver the power to (ahem) bring it all home.

Finding Dory still has its moments, and kids are going to love it, but it’s pretty squarely in the Cars 2 (which I liked more than most) camp. You, and your kids, will still have a good time, but the details will quickly become vague, and you won’t often be drawn toward a refresher.