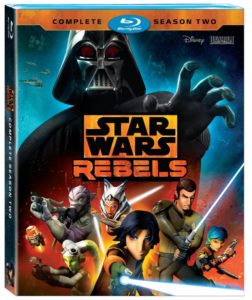 Star Wars Rebels is an almost bizarrely solid, animated series, and the second season took a show that was already good, and upped the game in almost every way.

The story started out with our band simply setting out to disrupt the Empire’s plans (with newcomer Ezra in tow) whenever they could, but with the show’s setting being at a point so “prequel” to the original Star Wars film, the connection to any unified opposition was decidedly loose. Such an opposition barely exists to be connected to anyway.

The show pulled in viewers by throwing in small side stories that might not truly relate to the overall conflict at all, but are instead like thought experiments about what the everyday people in the universe might be going through, and these are effectively built into character development opportunities for our leads.

Of course, there’s only so much grief you can cause The Empire, especially where Jedis are concerned, without acquiring a target on your back, but even when our heroes are battling the dreaded Inquisitor’s directly, it’s as a result of a complex structure.
buy celebrex online https://salempregnancy.org/wp-content/languages/new/celebrex.html celebrex no prescription

In case you aren’t overly familiar with discussions of animated series and/or films, they don’t usually sound like this.

While Star Wars Rebels is often a little “cutesy,” especially considering many people are trying to kill many other people, it’s an animated series that wants to have a lot of fun, but is rather impressed with young people. That’s becoming something we see more and more, but it isn’t exactly the mainstay of the genre yet.

Season 2 kicked things up a notch, mostly by moving our band of heroes into the thick of things to a greater degree. This brought Ahsoka into play a lot more, providing another viewpoint for our characters to come into conflict with, and upping the group’s threat level as far as The Empire is concerned.

Overall, this led to the crew of the Ghost spending more time working directly with the Rebels, even as that group is in the process of coalescing into an actual entity, but also moving in service of their own purposes as well. By keeping some of the episodic content in tact, the show is still free to take time to explore its growing characters, while throwing new and exciting plotlines at us.
buy benzac online https://salempregnancy.org/wp-content/languages/new/benzac.html benzac no prescription

All of this leads to a battle with Darth Vader himself, and as the show heads toward this point, it grows ever darker. One of the hurdles the show manages to get over exceptionally well is keeping the audience involved as the darkness looms, without becoming… well, cartoony.

While the release isn’t exactly overloaded with extras, the ones it has make it worth the purchase.

The best of them is a featurette, From Apprentice to Adversary: Vader vs. Ahsoka, which has the executive producer giving a long look at what went into that final battle, and why and how the show got to such an epic confrontation as the second season closer. He goes over creating the scene, and the thought process behind how it should go down, which takes a lot more work than you might imagine. He also discusses the process of steering the show to this point, and how much of the creative process of the season had to focus on keeping this in mind. You can’t just slap Darth Vader into a series willy-nilly.

The other bonuses are on the Blu-Ray and DVD release, and are a lot of fun, though are perhaps not as meaty.

Connecting the Galaxy: Rebels Season Two, is a collection of easter eggs and other connections to the Star Wars universe. Some aren’t exactly hidden, but it is fun to look over the various points throughout that season that reference other things.
buy hytrin online https://salempregnancy.org/wp-content/languages/new/hytrin.html hytrin no prescription

Rebel Recons are 20 “episode recons” that take you through a wide variety of explorations of episodes. You might get behind-the-scenes footage, interviews with the cast, or just highlighted details and explanations of different aspects of the show. They are quick, and throw a lot at you, and fans of the show will love them.

This is one to purchase, and even though the bonuses are pretty strong, they aren’t really part of the equation. It’s just rewatchable enough that they truly are bonuses. You’d buy it without them.

Star Wars Rebels: Complete Season Two delivers all 22 action-packed episodes of the hit CG animated series’ second season, plus exclusive, never-before-seen bonus material on DVD and even more exclusive footage on Blu-ray! Available August 30, this thrilling continuation of the Star Wars Rebels saga depicts the continued efforts of the crew of the starship Ghost to defeat the evil Empire.

Amid growing Imperial oppression on Lothal, the rebels are forced to seek out new allies throughout the galaxy and additional resources to sustain their fight against the Empire. With the help of Ahsoka Tano, the crew of the Ghost bands together with a secret rebel cell and ex-soldiers from the Clone Wars to join a fledgling alliance determined to restore peace and freedom to the galaxy.

As Ezra continues his journey to become a Jedi under Kanan’s guidance, the threat of the dark side looms large over the fate of the growing rebellion. Darth Vader himself will dispatch new Inquisitors to snuff any spark of resistance, setting the stage for a climactic showdown in which past lives will be revealed, terrible truths will be discovered, and the lives of our heroes will be changed forever.

Featuring the voices of Freddie Prinze Jr. (“I Know What You Did Last Summer”) as Kanan, Vanessa Marshall (TV’s “Young Justice”) as Hera, Steve Blum (“The Boxtrolls”) as Zeb, Tiya Sircar (“The Internship”) as Sabine, Taylor Gray (TV’s “Bucket and Skinner’s Epic Adventures”) as Ezra, Ashley Eckstein (Her Universe apparel) as Ahsoka Tano, Dee Bradley Baker (“American Dad,” “Phineas an d Ferb”) as Captain Rex and all the clones, David Oyelowo (“Selma” and “The Butler”) as Agent Kallus and Sarah Michelle Gellar (“The Crazy Ones,” “Buffy The Vampire Slayer”) as the Seventh Sister Inquisitor.