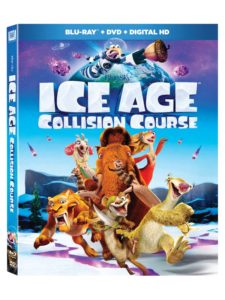 The Ice Age franchise is unbelievably 14 years old at this point, and the fifth film, Ice Age: Collision Course, brings together most of everything we’ve seen in the past for a last hurrah.

This time around Scrat actually manages to kick off the adventure, stumbling onto a spaceship and launching himself into space, ultimately causing a massive asteroid to head toward Earth.

Once doom is headed our way, we check in with our main characters, who are each given mediocre, sit-com difficulties to contend with. Manny (Ray Ramano) heads to the overplayed, “not good enough for my daughter” well, while also forgetting his anniversary. Sid (John Leguizamo) only has a story that is vaguely distinct from his general mopey, goofball attitude, this time aimed specifically at his lack of ability to find a mate. Diego (Denis Leary) and Shira (Jennifer Lopez) have their hands full delivering their lines with a straight face as they contemplate their ability to have kids, because they are perhaps too scary.

There’s a lack of interest at play here, and while the film manages to throw in a lot of zany, physical comedy to keep kids entertained in the moment, there’s little to get even the youngest to invest in the story. It’s clear that we’re after simply another round with familiar faces as a main draw, as opposed to having anything we’re convinced is worth doing.

After we play through something that feels a bit more like an episode of The Honeymooners than anything else, which isn’t that odd, as it’s a theme throughout the franchise’s efforts, we move to the meat of the matter, which is the destruction of life on Earth.

This brings us Buck (Simon Pegg) from out of the third movie, revealing a stone carving that details a prophecy related to asteroid hits, and Buck’s plan to avoid destruction by heading to the spot the asteroid is going to hit. It doesn’t exactly make sense, but there’s nothing else to do.

We have our reason to go somewhere, and the side issues that need to come up again and again, wherever we have a chance to stick a gag, but it can’t manage the fun of previous installments, because it doesn’t pay enough attention to the heart of things. There are a lot of characters that need their moments, and it becomes so rapid-fire, and the main plot (and its magic crystals) is so silly, that there’s little ability to simply take a breath and enjoy the characters.

The laughs are still there, and kids are certainly going to have a good time, but it’s far more forgettable than what we’re used to expecting from the franchise, and the fun just doesn’t quite win out.

The release may not be quite as loaded as some may expect, but it has a good mix of extras that add a good deal of fun.

The best, although one that some may find a little odd once they watch it, is Ice Age: The Story So Far, a featurette that takes us through the previous films in about fifteen minutes. The somewhat ironic surprise here is that we get a good luck at how much more interesting the stories were in the beginning. It’s a nice bonus, and getting a little refresher course is a welcome treat.

Also in the category of great additions is The Science of It All: deGrasse Tyson deBunks. Neil deGrasse Tyson looks at some of the crazy things that happen in the film, and answers questions about the science behind the things that wouldn’t/couldn’t really happen. He covers a lot of ground in the explanations, and this is a bonus that you’ll love to have your kids watch.

Beyond these, the whole thing is focused on Scrat, with the exception of a Figaro Sing-along, which is put together in a way that will make you wish that every release had similar efforts.

You get a full version of Scrat’s adventure here, Scrat: Space Out Mini-Movie, as well as a look back at everything the little guy has suffered throughout the franchise in Scratasia: Scrat’s Solo Adventures. Then we get Mysteries of the Scratazons, which take us behind-the-scenes with the mysterious aliens who hoped to help save the planet, by leaving the strange rock carving, and why they wanted to save it.

Finally, we get Star Signs of the Animal Kingdom, which is a fairly clever excuse to look back at the time we’ve spent with all the characters involved in the films.

Overall, the release is worth owning for the little ones, but is a bit disappointing. The bonuses help make up for that, and it’s gorgeous if you can take advantage of the 3D, which is rather amazing.