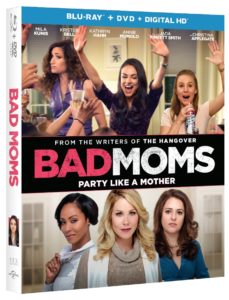 Going into a film like Bad Moms, noticing that it wants to make a big play out of being “by the writers of The Hangover” might not be the sell that it hopes. That’s a series that got progressively worse, and while all films would love to aim at everyone, we’re looking at demographics here that aren’t famous for similar tastes in comedy.

Somehow, whatever reservations may arise are short-lived once the film begins. While a general comedic outlook may be working in the background, this is a film that reins itself in. It’s hard to tell if that’s due to an attempt to write for a specific audience, or just growth, but Bad Moms realizes that even in moments of outrageousness, there is a point at which going further would actually negate the comedy.

The best move the film makes is letting the actresses move the comedy, as opposed to forcing them, and their underworked characters into situations that seemed like a good gag at the time.

Amy (Mila Kunis) is an overworked mom, and more than she is truly any particular character, she is a rallying cry, much like the characters found in many sit-coms of the last few years. She has her peculiarities, as does her situation, but she’s mostly just championing a theme. That isn’t the negative it may sound in a wild comedy, and there’s something to be said for a film that knows what it is, and what it needs. Kunis sells us on the fun, and brings her own charm to something that might have been better developed, but doesn’t really suffer for the lack of depth.

Fed up with the constant motion of her life, and the mean moms running the PTA, she decides that killing herself to try to pretend to be perfect just isn’t worth it. When her husband throws his own monkey wrench into her routine, she snaps, and just isn’t going to do it anymore.

She’s quickly joined by Kiki (Kristen Bell) a stay-at-home mom with several kids, who doesn’t really get out of the house much, and Carla (Kathryn Hahn)… who really just enters the game as a bad mom.

The story, like that of most light comedies, is something of a charade. It’s an excuse to work in gags, and doesn’t waste the effort trying to pretend to be anything else, which is oddly fitting. Gwendolyn (Christina Applegate) is head of the PTA and fancies herself the ruler of the school. She doesn’t like that Amy doesn’t jump when she says so, and villainy ensues. She ludicrously has some say in what happens in the school, because its hard to cackle without actual power, but there you are. Amy’s children dont respond well to the fact that mom now spends her time partying and doesn’t make their breakfast, and her job suffers from her new outlook as well.

You have to make allowances, and you might wish the script had a few more eyes on it, and another week of revisions, but at some point you might just be after a different kind of film altogether.

That said, there’s a certain honesty to the simplicity of things here, and it opens the door to the fun that springs from these three women banding together. Some things may get lost in the translation of an effort at hyperbolic statement, but then something hilarious happens. Then all hell breaks loose, and the movie is smart enough that it keeps itself in check, which lets you just go wild with it. Then Kiki can’t wear her sweatshirt anymore.

There’s a certain loss of ground as the film wraps, because the resolution feels like an odd statement about women, and doesn’t fit with the film, but it probably won’t matter much. The laughs were worth it, and if it’s ultimately “mostly disposable,” that’s a category that has some winners as well.

The Blu-Ray release is sadly lacking in much for bonuses, though the ones you get are pretty fun. There are a few deleted scenes that aren’t exactly screaming to be put back, an average gag reel which you would expect to be better, and some actually great footage of interviews with the stars and their moms. None of it adds tremendous value, especially by today’s bonus standards, but they are certainly worth watching.