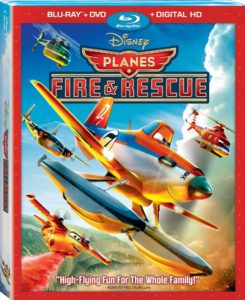 Planes: Fire & Rescue, much like the Cars sequel, spins us into an entirely new world, and though the Cars franchise sequels haven’t been quite the blockbusters Pixar might have hoped for, this broader sequel theory has made them both far better films than simpler “add-on” efforts might have managed.

Dusty finds himself out of the racing game, and quickly joins with a crew of rescue vehicles who keep an eye on a vast forest in order to contain fires. Naturally, this isn’t something that sounds like a great time to Dusty at first, but he learns that there’s a lot more to life than being in the spotlight.

This all kicks off because Dusty continually pushes himself too far, damaging a part that can’t be replaced. In a fairly obvious maneuver, he ends up crashing, and causing a fire. This leads to the airport being shut down, because they don’t meet the standards required for fighting fires, and now Dusty vows to get certified himself so that the airport can reopen.

Dusty has to go to training, and meets a host of new characters, and learns what it means to do some truly important work, while translating his crop-dusting experience to water-dropping. Meanwhile, back at the lodge, the only “villain” to speak of in the film, Cad Spinner, the SUV who runs a local lodge, and huge tourist attraction, views the rescue crew as his subordinates, and thinks his job, and lodge, are more important than anything, which eventually leads to dire circumstances.

The film is filled with adventure, and offers a great time for kids, perhaps winning out over the original, largely because it spends more time with a variety of characters. While neither film won over critics, by and large, this one generally scored better with most, and it deserves it.

The Blu-Ray release is not exactly overloaded with bonuses, but what it has makes for a worthy offering. It includes a mock-umentary style promotion that take you for a ride with the firefighters around Piston Peak National Park. It’s a lot more fun than it sounds, and is a solid treat for kids. It isn’t just that this turns out to be a cool feature, but shows off the extent to which Pixar tries to create things kids will appreciate.

You also get a featurette that is a kind of behind-the-scenes venture that looks at the real smoke jumpers who fight wildfires. It’s a combo effort of sorts that takes you along with the director and producer as they explain the film’s creation, and the hows and whys of the real world adventures that brought the movie to life, and helped to create the ideas and visuals.

You also get a couple of deleted scenes, with the much-needed introductions, a music video for “Still I Fly” by Spencer Lee, a couple of animated shorts, and an exclusive animated short, Vitaminamulch: Air Spectacular.

All in all, it’s a solid movie, and a good release. It’s one that will get repeated viewings as well, as the adventure, and laughs, win kids over.

After flying to the top of the box office this summer as the #1 animated movie in America three weeks in a row, “PLANES: FIRE & RESCUE” soars to spectacular new heights on Blu-ray and Digital HD, featuring wondrous high definition picture and sound, plus thrilling bonus features, including the all-new exclusive short “Vitaminamulch: Air Spectacular;” the mock-umentary promotional piece “Welcome to Piston Peak;” “CHoPs” TV Promo and “Air Attack:  Firefighters From The Sky,” an exciting inside look at the making of the film featuring real-life smoke jumpers and firefighters. Additional bonus features include Spencer Lee’s “Still I Fly” music video, deleted scenes with filmmaker introductions, and two “PLANES: FIRE & RESCUE” shorts: “Dipper” and “Smokejumpers.” Exclusively available on Disney Movies Anywhere (DMA) are the bonus shorts “Blade Ranger” and “Piston Peak.”