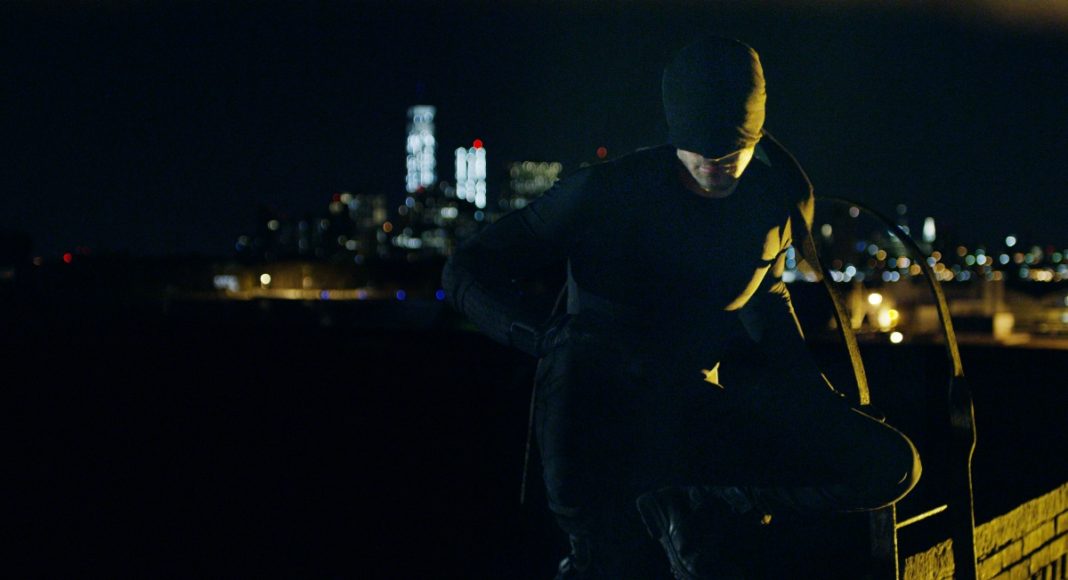 Netflix‘ Daredevil, the latest installment in the comic world’s takeover of pop culture, does one thing exceptionally well, and it may be all that matters.

The story is that of Matt Murdock (Charlie Cox), and we enter the series with the accident that left him blind when he was nine. Something about the chemical spill that resulted in his blindness left him with his other senses super-heightened.

Now a lawyer, with partner Foggy Nelson (Elden Henson), Murdock has become fed up with life in Hell’s Kitchen, and he turns to life as a vigilante. Hoping to help those in need, both by day and by night, Murdock finds himself embroiled in a massive conspiracy to take over crime in the city, and it becomes increasingly difficult to keep his personas separate.

His first case seems especially difficult, and his client Karen Page (Deborah Ann Woll – True Blood) was found over a bloody body with a knife in her hand. The slam-dunk case is obviously a frame job, but a new law firm with no money may have trouble proving it… but, Murdock’s “Man in Black” may be able to help.

The show soon splits its effort, letting us in on the group of criminals who have plans to consolidate power in the city, and especially focuses on Wilson Fisk (Vincent D’Onofrio), complete with counter-lead backstory and flashbacks.

What the show gets right, that stands out as THE thing it gets right, is not just the tone of comics, but the tone of this comic. One of the problems with bringing comics to life (and it has rarely been done right in the last ten years) is that comics are as different from each other as they are from everything else.

Daredevil, while not the best comic by any stretch, is a particularly dark effort, and is rather distinct in the precise morality of its hero. We may get a story about someone getting “superpowers” when they’re young, and turning their own losses into a life of vigilantism, but don’t mistake that for a simple Spider-Man/Batman mash-up.

Daredevil is a tormented character, most of that a result of his abilities, and his morality is in flux, and not exactly something that coincides with his Catholic upbringing. Like most superheroes, he is loathe to kill anyone, even in self-defense, but unlike most heroes of any sort, he finds a lot of room to explore before a person actually dies.

The show brings all this out impressively, and gives both sides of Murdock’s persona equal time, which also automatically removes itself from most comic adaptations. It also has a very unique visual style, which comes through best in its fight scenes, that reminds a bit of The Shield. There may be a lot of jumping and flipping (and perhaps too much), but the effort is more focused on the grit of the situation. Also, it’s pretty graphic.

The writing is far above par, even if only in the dialogue, which has a sense of realism to it that is counter to the industry standard for the genre. There may be a few missteps here and there, but overall you’re drawn into the characters by their reactions and conversations. You know things are going well when you feel like you’re just watching any investigation drama, and then get snapped back into the adventure when we’re suddenly in the next fight scene.

Put together, it’s something along the lines of perfecting a “comic tone,” by not trying to, and instead focusing on bringing the story to life, much as you might imagine bringing a novel to life without trying to include “novelness.”

Charlie Cox approaches so close to perfection, that the remaining distance isn’t especially noteworthy. He not only believably delivers an internal struggle that some audiences might not find immediately approachable, but he sells injury well, which isn’t as easy it might seem. Which, of course, leads to another facet of the character, and show, that stands out as a kind of curiosity – Daredevil bleeds a lot.

The show does have a couple of drawbacks, and they come from Fisk (aka Kingpin) and Foggy. The characters are pretty strong generally, but Fisk has a tendency to go a bit cartoony, and Foggy’s overreaction around episode 9 or 10 makes for a scene with Murdock that is hard to sit through.

The last could be one of those “purist” moments. I don’t recall the early history of Daredevil, and maybe such a falling out is “what’s supposed to happen,” but it doesn’t play well on screen. The problem with it is that it doesn’t seem to be the reaction of the character we just spent several hours with, and that’s jarring.

D’Onofrio is as brilliant as you’d expect, and the writing surrounding his character is one of the most gripping things you’ve seen on television in quite a while, but certain moments lean a little too far to one side, and you can almost see the screen becoming animated.

Overall, this is the show to beat for 2015, and I dare you not to binge the whole season in a week or less.