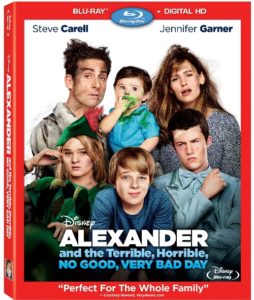 You have to give a bit of applause to Steve Carell and Jennifer Garner for being in Alexander and the Terrible, Horrible, No Good, Very Bad Day. It isn’t that it’s good, because it really isn’t, but it’s a fun, family-friendly effort that aims at making kids laugh.

In the world of movies geared towards younger audiences, there are two camps – those that have some appeal to older audiences as well, and those that really, really don’t. This one is squarely in the latter camp, which actually makes it hard to judge.

Sure, it’s fairly stupid, but it isn’t precisely because it thinks you’re stupid (or kids are). It’s just that if you’re young, you’re easier to get a laugh out of, and things like getting kicked by a kangaroo are hilarious.

While the film manages a decent story, it’s a board book decent story, and delivers its messages by way of devices one step short of neon signs and kicking puppies. 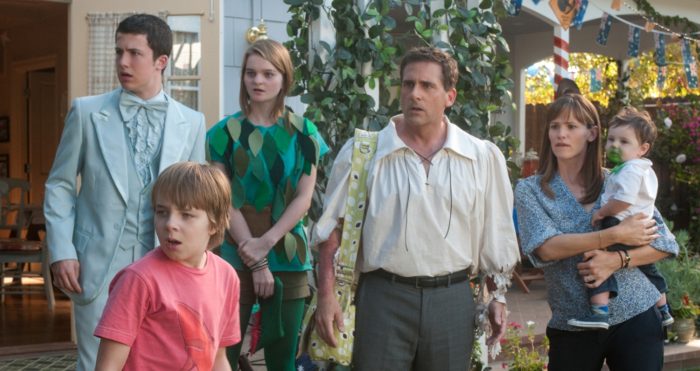 It should be noted that I’ve lost familiarity with the book, but the film seems to have little connection to it, except that there is a boy named Alexander, and everyone is having a very bad day. As the trailers make apparent, everything is going wrong for everyone, notably in the face of things seeming to go right. Dad (Carell) has an interview for a great job, but he’s forced to bring a baby with him. Older brother has life swing toward the positive, which causes him to “high five” a banner at school, which causes the trophy case to be destroyed. Etc.

The real problem with the film is that, even among its target audience, it’s entirely disposable. Younger audiences will laugh, and have a good time overall, and the film even gives them a decent theme to work with, but it tries to dive into too much of the family.

With characters and problems everywhere, none of them have enough time to get you interested in them, and perform all the slapstick required. It comes close at times, but the film feels hollow. That’s fine enough for kids, perhaps, but it doesn’t give them that lingering interest that will have them calling for it again.

The script is really to blame, as the actors all do the best they can with what they have. Even looking at the younger crowd, there is too much competition, and much of it is eager to think better of kids’ sense of comedy than to simply constantly fall, smash things, and/or set things on fire.

It’s worth the initial visit, but it’s unlikely to make it to heavy rotation.

There are surprisingly few extras for the release, considering the effort we have here, which could have easily sold kids on a few more goodies.

That said, some of them are pretty cool.

Alexander in Real Life is a fun, though unfortunately short visit with author Judith Viorst and her son as they reflect on the book’s history. I imagine kids who know the book will love this, as you don’t often get into the mind of a children’s book author.

Snappy Crocs and Punchy Roos is a featurette that takes us behind-the-scenes of the birthday party and its animals. It’s fun, and kids will like some of it, but it runs about 7 minutes, and could have easily been a 30-minute treat for fans.

Walkabout: A Video Diary is exactly what it sounds like. Ed Oxenbould (Alexander) grabs a camera and documents some of his time on set. This is another addition that could have been longer, and might have given a bit more. At 6 minutes, for such a feature, this feels like a last-minute add-on. It’s still a good bonus, but it leaves you wanting more. If you’re going to have it, have it. Still, kids will find it interesting to get a different point of view, as the co-stars talk about working on the movie, and especially working with young actors, and Oxenbould himself.

You also get a blooper reel, which is a fairly standard just shy of five minutes, and a music video “Hurricane” by The Vamps.

For a Disney film, and one with big names, most people looking to buy will probably expect more in the way of extras to push them over the edge.

ALEXANDER AND THE TERRIBLE, HORRIBLE, NO GOOD, VERY BAD DAY

Disney’s heartwarming comedy will have your entire family laughing out loud. Based on the best-selling book, it follows the exploits of Alexander as he experiences the most terrible and horrible day of his young life and wonders if bad things only happen to him.  But he discovers he’s not alone when his dad (Steve Carell), mom (Jennifer Garner) and family live through their own terrible – and hilarious – day. It will tickle everyone’s funny bone, and warm their hearts as they discover how even on rotten days, families can grow closer.

Once Zoey's Extraordinary Playlist gets to the point where it kicks off its shtick, it became somewhat difficult to keep track of...
Read more
Newsline