The One I Love Blu-Ray Review 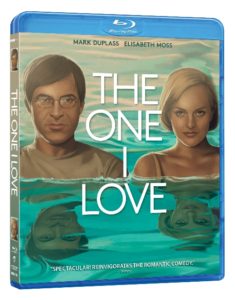 The first feature-length effort from both writer Justin Lader, and director Charlie McDowell, The One I Love will hopefully serve to light the fuse on their careers.

A brilliant, and outlandish effort that showcases the somewhat surprising talents of stars Mark Duplass and Elisabeth Moss, the film has them pulling double duty in a doppleganger, marriage counseling effort.

Ethan (Duplass) and Sophie (Moss) are having marriage troubles, and their therapist (Ted Danson) thinks they should get some time away from life’s stresses, and focus on each other. He knows a great vacation house they can use.

Things aren’t going too bad, when the couple discovers that the house has a small apartment in back, and there’s something very strange going on there. It’s a slow, and well-written, road to figuring it out, but whenever one member of our couple goes in alone, another version of their partner pops into existence, apparently oblivious to the idea that they aren’t the real Ethan or Sophie.

It’s not just a double either, but a nicer, sweeter, more idealized version. Our couple tries to figure out what’s going, and as we explore with them, the film tackles major difficulties of marriage and relationships in general. Like all great science-fiction stories, it uses the impossible to make real statements about life that can be hard to explain otherwise.

At first, the incredible oddity of something unknown is its own magic, and the couple decides they have to continue to explore. This is followed by the establishment of rules, and then the questions – “Why do you want to spend so much time in there?” “What do you do in there?”

As things progress, it becomes clear that something even weirder is actually going on, and our couple is forced to look at life, and love in an entirely different way than they would have ever imagined.

Duplass and Moss are surprising, as I mentioned, not because they haven’t been good before, but because this is fantastically difficult work. Apart from a few minutes, they are the only ones in the film, and given the situation, they spend the majority of the time talking to each other, and themselves. While it may not jump out as especially tricky, selling a full-length film, and making it engaging and interesting throughout, that is nothing but conversations is about as hard as acting gets. Which is why you don’t see it that often. Throw in talking to yourself quite a bit, and it’s nearly impossible to deliver.

Producing believable reactions, both to the initial relationship interplay, and to the sci-fi bubble we step into, is the sort of work a lot of actors know better than to try.

The One I Love Bonus Features

As you might expect, this doesn’t have a fully stocked extras section. On the other hand, it has one of the best commentary tracks you’re going to find. Director Charlie McDowell and Mark Duplass provide the track, and they run through the making of the film in a way that is just about exactly what you probably wish all other such tracks could manage.

They let you in on the actual details of the behind-the-scenes work, which includes how difficult some scenes were to get right, but they also let you into the world of what they were thinking, and how they tried to make the scenes work together and fit into the overall effort.

Plus, they’re having a good time, and much like several other interviews with Mark Duplass, he never seems to lose that “early” sensibility of someone permanently amazed and humbled by doing this for a living.

The only other bonus is a short visual effects reel that gives you a small taste of what they had to do to produce the scenes with the doubles, which are especially tricky in certain places, like when all four in the room, or around the table.

On the brink of separation, Ethan (Duplass) and Sophie (Moss) escape to a beautiful vacation house for a weekend getaway in an attempt to save their marriage.  What begins as a romantic and fun retreat soon becomes surreal, when an unexpected discovery forces the two to examine themselves, their relationship, and their future.

Condor is a TV series brave enough to ask whether or not a 40-year-old Sydney Pollack/Robert Redford classic should be ten hours longer. Much...
Read more
Movie Review

The Rain kicks off with a series of events that is by now so commonplace that it makes it difficult for the post-apocalyptic...
Read more