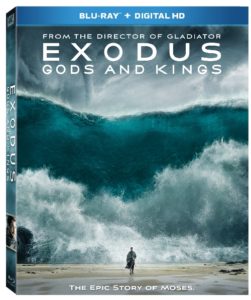 People often talk about over-hyped and under-hyped films, and with good reason, but when a film strikes you as getting exactly the right amount of hype, it’s rare indeed. This is exactly where Exodus: Gods and Kings seems to fall. It’s a film that seems like it should have gotten more attention, especially considering the cast, and the fact that it was directed by Ridley Scott.

It turns out that the film, while actually quite good, delivers to precisely the level of interest the world seems to have dictated is its due.

A thematically unique spin on this, or any other, biblical telling, Exodus starts us off with Moses (Christian Bale) in the prime of his Egyptian Prince-ish-hood. He’s about to take care of some upstart tribe or other with his “brother” Ramses (Joel Edgerton), and a prophecy kicks off Ramses’ dislike of the man he has grown up with his entire life.

The plot obviously needn’t be gone over, but the film takes a somewhat curious, and, for lack of a better turn of phrase, not particularly “religious,” road in its delivery. That’s an immediately odd view for reasons that are also obvious, especially since Moses does quite a bit of talking to God, but this is the version of the biblical tale as if by somehow who has watched a lot of specials on the History channel.

The key point there being that it feels as though the film itself wants an out when it comes to religion in general, and puts forward a Moses that doesn’t seem like it would get the approval of any church. Moses has a hell of a knock on his head when he first meets God, and his wife even offers the “out” that he’s delusional because of the trauma. Moses trains slaves for guerilla warfare, but when plagues start to fall on Egypt, we get a lot of attention to the plausible explanations for them.

Besides this aspect of the religious nature of things, Moses has rather an odd relationship with the God who has chosen him. He doesn’t consider himself Hebrew, and doesn’t seem particularly fond of God, or His decisions.

Still, the film works, and Bale and Edgerton draw you in to a degree that is perhaps a bit more than the film deserves. It’s a complicated telling of the historic events, but one that dances with its own effort until it becomes surprisingly entertaining. When you’re dealing with a story everyone knows, and has seen on film, not only often, but in the form of one of the classics of cinema, it has done well to be watchable at all.

The Blu-Ray bonus features don’t exactly lead you to feel that the release is especially loaded, and those who check the 3D release may find it rather irritating that there is a disc of extras included there that aren’t available for the Blu-Ray release.

There’s an audio commentary with Ridley Scott and Jeffrey Caine, and it’s a decent enough track, but it’s somewhat heavy on less interesting behind-the-scenes topics. That’s a matter of personal preference, of course, but Scott might easily be seen as thinking that most people are a lot more interested in his own perspective on the film, than they are in the film itself.

You also get nine deleted and extended scenes, and a special feature, The Exodus Historical Guide, a kind of pop-up trivia effort that gives details on the historic characters and world as the film plays. Some of these are pretty interesting, and those who have any real pull to the deeper history of events will find this a great feature. On the other hand, some of them might do with a footnote.

That’s it for the Blu-Ray release, and considering that a pack of other goodies is out there (see full list below) doesn’t lend itself to making fans happy. This isn’t unheard of, as 3D is the new Blu-Ray, people are probably used to the idea that the Blu-Ray release has a lot more bonuses than the DVD release.

Overall, it’s a decent package, and a film that is better than most might believe as a result of the lack of hype.

From Ridley Scott, the acclaimed director of Gladiator, comes the epic adventure EXODUS: GODS AND KINGS, the story of one man’s daring courage to take on the might of an empire. Using state of the art visual effects and engrossing 3D immersion, EXODUS: GODS AND KINGS brings new life to the story of the defiant leader Moses as he rises up against the Egyptian Pharaoh Ramses, setting 400,000 slaves on a monumental journey to escape Egypt and its terrifying cycle of deadly plagues.

The EXODUS: GODS AND KINGS Blu-ray 3D™ Collector’s Edition comes with a cavalcade of bonus materials that will take you behind the scenes of the amazing retelling of the historical tale. The Keepers of the Covenant documentary explains how Ridley Scott brought ancient Egypt to life with hours of never-before-seen peeks at the film’s development.