Welcome To Me Blu-Ray Review 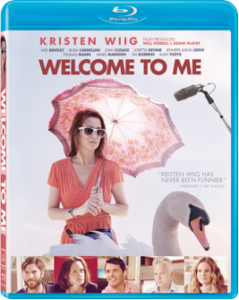 Welcome to Me is the indie gem of the year already, and despite starring Kristen Wiig, not nearly enough people are talking about it… or are aware it exists.

Wiig stars as Alice Klieg, a psychiatric patient who could not be more in need of her meds, but quits taking them. When she does, her days are spent in something like a fugue of self-obsession and rigid routine. She’s addicted to Oprah, almost oblivious to the existence of other people as beings in their own right, and socially inept in a sense that could make the turn of phrase a devastating insult to others.

When Alice wins the lottery, to the tune of over $80 million, she decides to foot the bill for her own television show that’s sort of like Oprah, if Oprah spent her entire show talking about herself. She also decides that she doesn’t really have to take her psychiatrist (Tim Robbins) seriously anymore, because why would she?

She stumbles into her show when she sits in for the taping of an infomercial, and when the microstudio gets the chance to put out her show, they aren’t in a position to turn down her money.

As loopy as it sounds, and as much as the brilliant cast (Joan Cusack, Jennifer Jason Leigh, Wes Bentley, James Marsden, Linda Cardellini) only gets a chance to support so much, the one woman show is almost beyond compare. Wiig is perfect in a role that could so easily go wrong at almost any point, and her ability to portray the honesty of a character that is, at best, unlikable is what makes the entire film shine. She has to carry virtually every moment, and clearly takes the simplest bites of personality as seriously as any scene. It makes you hope she isn’t especially method, or you’d have to fear for her costars.

This is the sort of effort that could only exist in an indie realm, despite the cast, because the demographic is only potentially so broad, and it’s a movie that is truly unique. It isn’t just that this character, or situation, is something you haven’t seen before, but it’s a screenplay so true to the spirit of its own effort that it doesn’t play to norms or conventions, because it wouldn’t make sense to the character. Sure, there’s a slightly “happier” point toward the end, and as convention suggests, the character “learns” by the end, but only in some technical sense that means very little.

Where the film moves to another level is insofar as Alice manages to relay information about life to the audience, almost to the degree that good sci-fi stories tell you about reality by using the impossible. Plus, it’s just amazingly fun, and delivers a true experience as opposed to just a movie.

The Blu-Ray doesn’t have a lot of extras, which is to be expected, but is still a bit of a disappoint for those who become fans. There’s one featurette that is something of a combo between a behind-the-scenes effort, and a sequence of interviews that give the cast and director a chance to talk about working on the film. The odd thing about it is the director’s take on the film, which almost makes it sound like all the best moments of the film are somehow those that did not exactly work with her hope for things.

You also get a few trailers.

When Alice Klieg (Kristen Wiig) wins the Mega-millions lottery, she quits her psychiatric meds and buys her own talk show. Inspired by the immortal Oprah, she broadcasts her dirty laundry as both a form of exhibitionism and a platform to share her peculiar views on everything from nutrition to relationships to neutering pets.