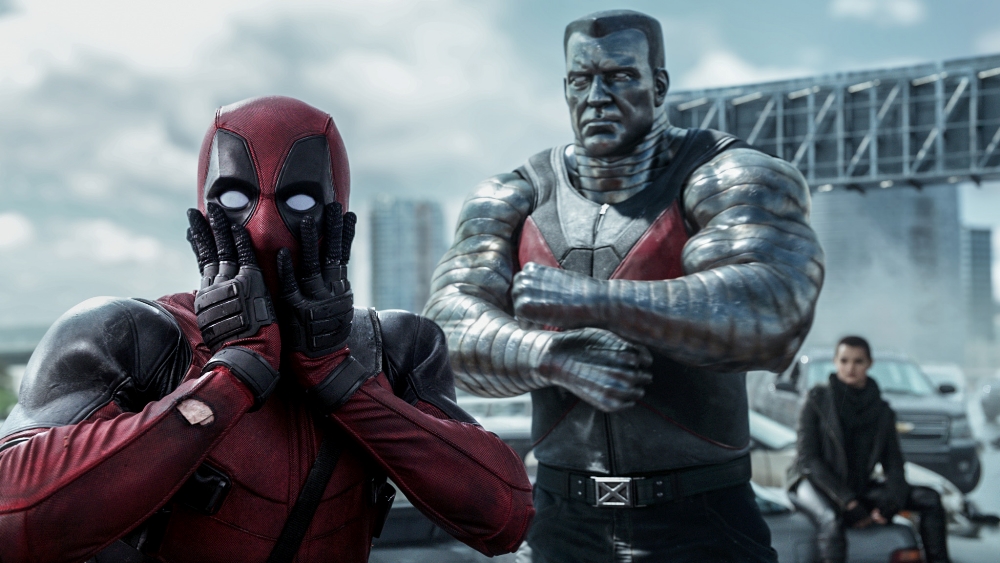 With the growing popularity of comic-book films comes what will likely be an ever-growing list of mocking efforts, and mock efforts. Add in the massive diversity that now exists in the world of graphic novels, and it will soon be hard to pin down exactly what counts as a comic-book, or superhero, film. From Kick-Ass to American Ultra, the films that try to turn things on their heads are everywhere.

Deadpool would like to kick that up a notch.

A curious comic “hero” to begin with, the wisecracking, outlandishly vulgar, wildly juvenile Deadpool gets a few extra jolts of crazy here, and basically because this is Ryan Reynolds‘ vanity project.

The story follows (which misleadingly implies a linear format) the story of Wade Wilson (Reynolds), a screwy brand of mercenary who wants to help people out, but chooses vaguely psychotic methods to accomplish same. His curious, and decidedly fluid, anti-ethical bravado is itself a character in the film.

Not long after managing to fall for the woman of his dreams, Vanessa (Morena Baccarin), Wilson learns that he has the worst case of cancer the world has ever known. A mysterious man shows up offering him a way out, which leads to Ajaz (Ed Skrein), a man who tortures people until their mutant genes kick in and give them superpowers.

In Wilson’s case, he develops the ability to heal himself, of anything, but the price he pays is that he now looks like a prune.

The film takes us through Wilson’s torture, and his plot for revenge against Ajax, all while twirling down an almost incoherent road of vulgarity and raunchiness just because we can.

It amounts equal parts fun and thumbing one’s nose at the movie industry and superhero films in general, and while that works quite well for purposes of a slick, light bit of fluff, the film can’t always get out of its own way, or out of its own head. It’s so focused on certain elements and/or roles it demands to include, that it doesn’t bother with petty minutiae like actually making sure that it’s good.

Even such a theory would work if you stuck with it, and at a certain point you can legitimately bypass the tedium of plots that make sense, and characters that have depth, etc., but you can’t also ask that audiences care about the plot and/or characters. You don’t question the development of Stripes, or wonder if we might have benefited from a more detailed look into the heart and soul of Lili Von Shtupp. But, Deadpool isn’t anything like humorous enough to shrug off a plot, and moreover it seems to demand that you invest.

Worse still, the film opens with a title sequence that, in rather amusing fashion, declares that the film stars such people as, “a moody teen,” and, “a CGI character,” but the film might as well have stuck with those labels as opposed to giving them names. There aren’t really any other characters, there are only “purposes” that need filling.

It just doesn’t quite congeal, and it seems to be that there needed to be a little more time, and one suspects that Reynolds had a little too much say in things. Still, it’s not only a very fun ride, it is perhaps a movie that needed to be made. Not only does it make for that rare possibility of a sequel that is better than the original, it is likely to inform a lot of the future of comic-book films. Perhaps certain things went wrong, and a boring villain who is only “the bad guy” because it says so in the script is certainly on that list, but something went very right, and those in charge of other properties are going to want to pay attention.