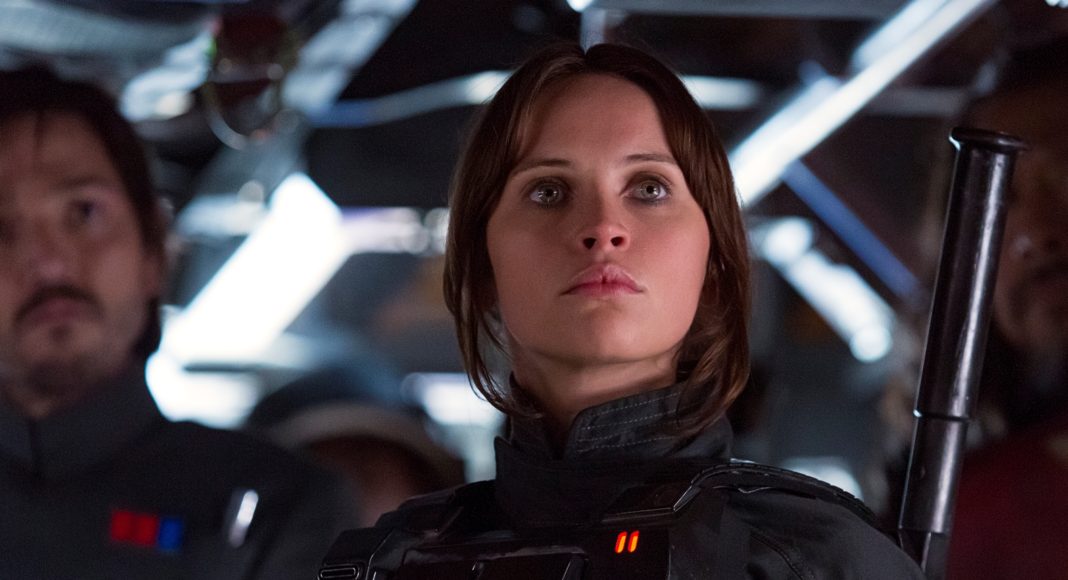 The Star Wars franchise now has as many balls in the air as the Marvel Universe, and that means that there are going to be titles that exist almost exclusively to get fans to cheer. Rogue One: A Star Wars Story is such an effort, and even if the fanservice gets boring and the plot development is largely sad, it’s hard to deny the fun of sitting through the whirlwind.

Felicity Jones plays Jyn Erso, who will eventually lead the mission to steal the plans for the Death Star, because, as we know from the original film, we need those plans to learn about the fantastic flaw in the design that will blow up the moon-sized weapon/base. The fan fawning begins there, as the entire premise of the film is a grand scale rebuff of one of the most complained about “plot flaws” that’s been floating around for forty years.

We meet Jyn as a young girl at the moment that her father is found and forced to return to work as one of the Empire’s top scientists, specifically so that he can help work on said Death Star. Everything about these first ten minutes sets the stage for the entire film, and at least lets you know exactly what’s coming.

The empire lands a ship about 1,000 yards out from the farm where they know Galen Erso (Mads Mikkelsen) is hiding for no other reason than to be able to watch the white suit and black stormtroopers march menacingly across the plain. The ensuing dialog is both flat and stagy, which is hard to pull off, and if you don’t roll your eyes when Jyn’s mother shows up with a gun, it’s only because you’re mesmerized by the fact that it’s a Star Wars film. When the stormtroopers end up no better at finding a girl who literally couldn’t be anywhere else than they are at hitting what they’re aiming at, the prelude to the film is pretty much complete. buy micardis onlinehttps://bethanyhealthcare.org/wp-content/languages/new/micardis.html no prescription

We get the rest of the characters as the plot points we want to convey more than anything else, and only the droid, K-2SO (Alan Tudyk), manages to deliver something that doesn’t feel hollow. Cassian Andor (Diego Luna) is given to us as though written by someone who knows only a footnote from a history text and has decided to romanticize the hell out of it, as opposed to any person.

We get glimpses of several other characters, but they don’t even amount to that much. Forest Whitaker plays a Rebel who has rebelled against the “not rebel enough” main Rebel force, and works now as more of a guerilla/terrorist. His character never has the chance to be more than the description on his wanted poster. Taking over the role of “sidekick duo” are Donnie Yen and Wen Jiang as former guardians of a Jedi temple that has been destroyed… or whatever.

You’d like a character or two that you could remember their names without having to look on the box of the toy, but that isn’t what this film is after. This is a film that would much rather sell you the idea that the Empire stores data on ’80s hard drives stored in a giant tower, because how else will get our characters to climb, and fall off, a giant goofy tower? Nevermind that we have spaceships, laser guns, and FTL drives, we’re still storing three songs worth of data on a drive the size of a small briefcase. It’s also a film that builds giant towers with nonsensical outcroppings that we put consoles on, because how else is our heroine going to come near to falling… again. buy mobic onlinehttps://bethanyhealthcare.org/wp-content/languages/new/mobic.html no prescription

Completely inconsequential characters from Star Wars IV get cameos, and Darth Vader hasn’t quite grown out of slinging little quips along with his displays of power. Because, you know, puns. Darth Vader is that guy.

The plain truth is that, while this movie is miles better than any of the prequels, it’s still driven by marketing, licensing, and the built-in audience far more than the idea that we had a good idea.

That said, and leaving the Peter Cushing drama to one side (because it’s both interesting and awful), it’s still a fun ride. You may wonder about the decisions, but it never falls completely apart. Many, who aren’t absolute die-hards, are bound to be a bit disappointed by the simplistic effort where the plot is concerned, but it’s hard to imagine feeling completely deflated.

It’s a film that demands that you bring a lot to it, but it also knows that you’re going to either way. Once things get rolling, the power of the franchise takes hold, and the film at least dodges some of the death blows that tore apart the prequels. The dialog mostly works, or at least doesn’t overly detract from the ability to watch, and while it relies on a lot of pat plot answers (ugh, the cord is hooked around the shmigenfarb and now we’re doomed), some of them are the film world’s goofy cliches for a reason. buy motrin onlinehttps://bethanyhealthcare.org/wp-content/languages/new/motrin.html no prescription

You haven’t found your new favorite here, but (gasp) you did get some hope that we may be moving in the right direction.