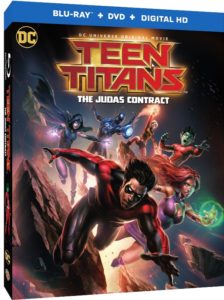 Those who aren’t familiar with anything but the cute Teen Titans series are in for quite a surprise as the heroes return to their darker roots in Teen Titans: The Judas Contract, which is one of the most incredible efforts from the comics. The feature-length film is inspired by a story arc from the 1984 DC comic, and has an incredible voice cast backing the supremely gritty arc.

The Blu-Ray Giftset, which includes an exclusive Blue Beetle figurine, will hit on April 18th, with Digital HD release on April 4th.

In The Judas Contract, the Titans – Beast Boy, Raven, Blue Beetle, Robin, and Nightwing – are led by Starfire, but their newest teammate, Terra, is throwing the groups dynamic out of whack, and the team comes up against Brother Blood, an ancient evil, and Deathstroke is waiting in the wings to cause problems as well.

The “normal” plotline of a comic gets turned around as this story revolves around intrigue and strange twists, with, as usual, a focus on the team’s ability to gel as a team. It makes for an incredible adventure. The Blu-Ray also comes with a couple of great featurettes that are probably worth the price of admission on their own.

Check out the trailer and get all the info on the release below.

The landmark Teen Titans story will be available on Blu-ray™ Deluxe Giftset ($39.99 SRP), Blu-ray™ Combo Pack ($24.98 SRP) and DVD ($19.98 SRP) starting April 18, 2017.  The Blu-rayTM Combo Pack includes the movie in high definition on Blu-ray Disc, a DVD, and a digital version of the movie on Digital HD with UltraViolet*. The Blu-ray™ Deluxe Edition will include all components of the Blu-ray™ Combo Pack, along with an exclusive figurine of Blue Beetle in a numbered, limited edition gift set. Teen Titans: The Judas Contract will be released via Digital HD on April 4, 2017.