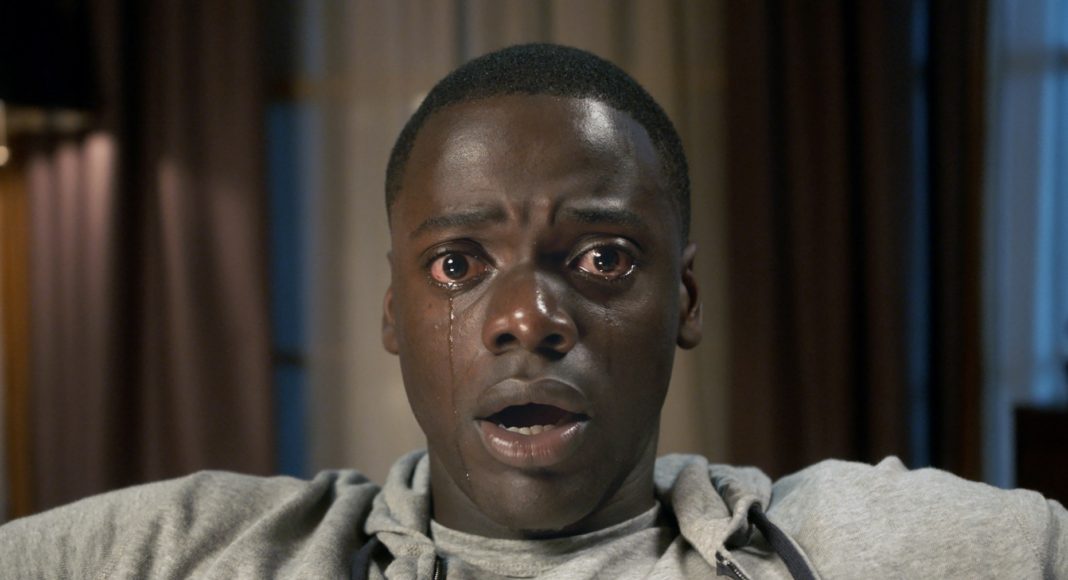 Get Out Movie Review

There are several films in play with Jordan Peele‘s Get Out, and while that’s an admirable endeavor, much of what happens diverts focus from some other priority. Horror films are a tricky breed at the best of times, but mixing your sub-genres rarely works, and when you throw in a fierce dedication to social commentary, it isn’t hard to imagine that some part of the effort is going to suffer.

It starts off with a simple premise – Chris (Daniel Kaluuya) is about to take a trip to meet his girlfriend’s family. He’s been dating Rose (Allison Williams) for about four months, and what is already a tense idea has the added bonus for Chris that she hasn’t told her parents that he’s black. As they drive to the “very private” home (because, of course), a run-in with a cop helps set the stage for racial tension.

Uncomfortable as Chris may be, he isn’t prepared for the curious actions and reactions of Rose’s parents, Dean (Bradley Whitford) and Missy (Catherine Keener), or their “help”. The trouble here is that things are a bit overt for a movie that hopes to build. Just when it seemed things couldn’t get weirder, Rose’s brother shows up in order to act like a predator toying with his food, and Chris learns that an annual party is happening this weekend, complete with, as Rose says, “a lot of ‘really white’ people.”

Now, things really go sideways, and I won’t spoil any of it, because what the film truly does well is make you shift in your seat, and you can’t know what’s coming without ruining that. Clearly, Chris is in trouble, but the hows and whys are put together well, and should be enjoyed.

The problem with the movie is that it wants to mix nervous tension with the truly creepy, but both lose their ability to succeed because of the commentary effort. That commentary is one that’s wonderful on many levels, both as a simple statement, and as a deeper look at horror films, and the minutiae involved in a world of racial bias. While the film is obviously making grand, sweeping statements about treating minorities as lesser “objects,” it’s the subtler maneuvers that really sell it. Sure, the white people are walking around being rather obvious, but nothing there is as effective as Chris’ reaction when Rose apologizes for her parents and/or their friends. It’s no big deal to him, and there are volumes contained in how he takes, and assimilates, what happens around him. It is no big deal. After all, he’s had worse just walking around on a daily basis.

Besides, and this will give a little away, by the end, it’s hard to tell who is hypnotized, and perhaps what exactly counts as being hypnotized. If you take a whole lifetime to do it, just by raising someone, does that mean you didn’t hypnotize them? Or, at the very least, use them in a way that is not altogether dissimilar from any other example of using people? Then again, some people act so strangely, and when left to their own devices, robotic, that maybe they are less metaphorically hypnotized as well. It’s hard to tell exactly what the film’s view is of such things, but just the fact that it makes you think a little is worth the price of admission.

But, the movie is largely too blatant in its thematic effort, which means that it is overshadowing the ability of the creepy film that’s trying to work in those themes. As things become more and more odd, it’s too fast, too odd, and the reactions we get to odd things induce boredom more than anything. While things move along well at first, it isn’t long before it’s hard to keep Eddie Murphy’s stand-up about black people not being in horror films from popping into your mind. There’s a balance to maintain in a movie that is going to keep you unnerved and uncomfortable, and there are only so many times the running girl can trip over tree roots, or the car, of course, suddenly won’t start when you need it to. Get Out dodges those cliches, but apparently only for lack of time. There are new twists, like the “everyone stops talking” scene, but where they pop up they are borderline silly and ineffectual. At some point, he didn’t, in fact, get out a long time ago, and everything else that happens has to fight an uphill battle against boredom.

As another wonderful positive to the overall effort, horror films can be a great look at a society’s fears, assuming they are well-received. This leads to a certain amount of difficulty in cultural crossover, but also becomes yet another level of commentary on its own. Not long ago, home invasions were a pretty serious concern, and the market became flooded with such titles.

Right now, there are a lot of people who are scared of rich, white people, and you have to hand it to Peele for making the effort. The theory doesn’t make the film work though, and while much of it is solid on a scene-by-scene basis, and the actors are turning in great performances, the whole isn’t worth nearly the sum of its parts.